Weird Japan as seen by tourists

Many times I’ve seen tourists in Japan (even myself) rise eyebrows to some things that are normal in Japan. Let’s explain a few things. From accomodation, to themed restaurants, toilets, robots, plastic food, and everything visual walking around the streets of Japan. Do you have any other things to add to this list?

<<I want to sleep in a capsule hotel! I want to see a love hotel!>> This are the most common things I heard when tourists talk about accomodation in Japan. Capsule hotels were created as the salaryman couldn’t go back home after long days at work. To cover a demand (a bed to sleep) for few hours until next day, work again. Nowadays there are lots of different capsule hotels styles, from the cheap downtown to the luxury in districts like Ginza. Been using this hotels when I need a place to crash, and pack light. This are no hotels for long stay vacation, or big suitcases. Check out my experience in capsule hotels.
Love hotels, usually located nearby leisure and nightlife districts, like Roppongi, Shibuya, and Kabukicho. Hotel rooms to spend a few hours with your “love”. Why people asks so much about it? there are many of this hotels with themed rooms, like a cafeteria, jungle, spaceships and so. But why don’t you take your partner back home? Apartments in Tokyo are all packed together, and walls are really thin. You don’t really want to wake up your neighbours because you’re having a funky night. Cops may show up due to the “disturbance”.
Sleeping ANYWHERE. From the get go on the train, commuters sit down and start to be noding with their eyes closed. Those few minutes with nothing to do when you’re on your way to work or school are the perfect chance to take a power nap. Had lunch in a cafeteria, and have few minutes to spare, another chance. Japan’s so safe that nobody would steal anything when you’re sleep. You can have your laptop on the table, your phone and even your wallet, nobody would care. Don’t try that in other countries. Even at the office, if you take a power nap in front of your computer inemuri it’s seen as you’re a hard worker and won’t even leave your post on work time. 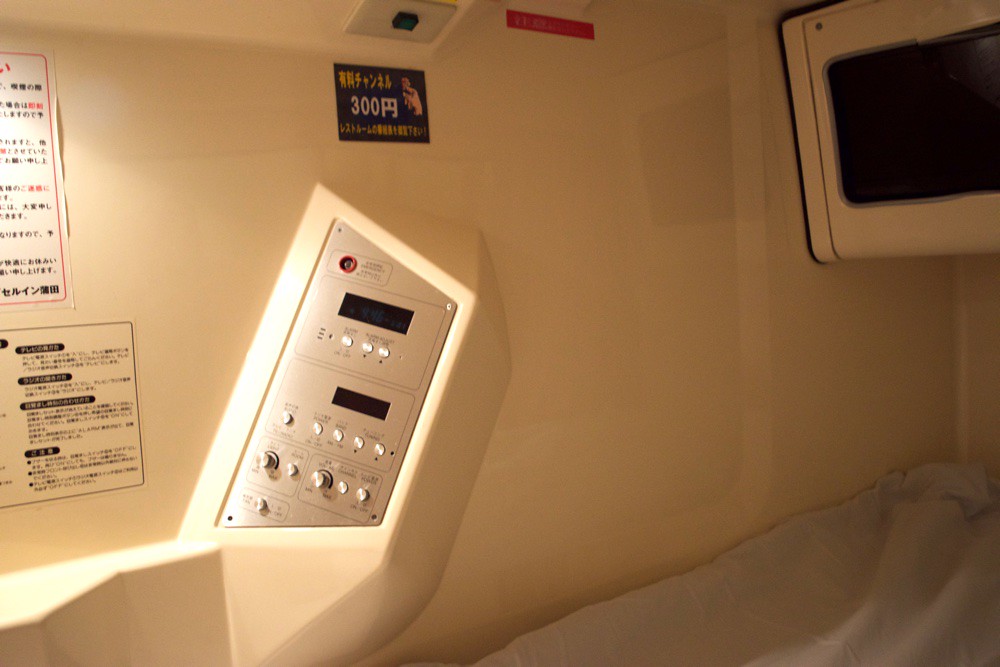 When your room looks like a spaceship escape pod.

There are hundreds of themed cafe only in Tokyo. More like an excuse to enjoy something else than a cup of coffee, this places have a set special offer for customers. For exapmle, the Cat cafe, where you can pet a cat while enjoying a drink. This were created also for a reason. In several areas in Tokyo is forbidden to have a pet in your apartment, so this cat cafe started to appear, to cover that lack of affection that a pet can give you. Now there are many other animal themed cafe. The ones I visited, owls and snakes.
Maid cafe, again, now it seems to attract the tourist audience. While having a usually sweet drink and a set menu, waitress attend to customers with high tone voices, serving them with all the attention needed. This business started in Akihabara, known for the manga and anime culture, and the maid cafe appeared as the customers around Akiba were mostly lonely guys. For those who really need a hug, they have the cuddle cafe, were customers pay different fees for the services, like staring at each other while laying down, taking a nap on the maid knees, or a hug. Just cuddle. Manga Cafe are for those who enjoy reading as much as they want (or time willing to pay) for as much manga available, on their own private booths. And many tourists search for the most chic manga cafe to spend a night, because they’re cheap compared to hotels, and for the experience. My favourite Cafe? The craziest experience in Harajuku, Kawaii Monster Cafe. They have many shows during the week, and it’s always a new experience. 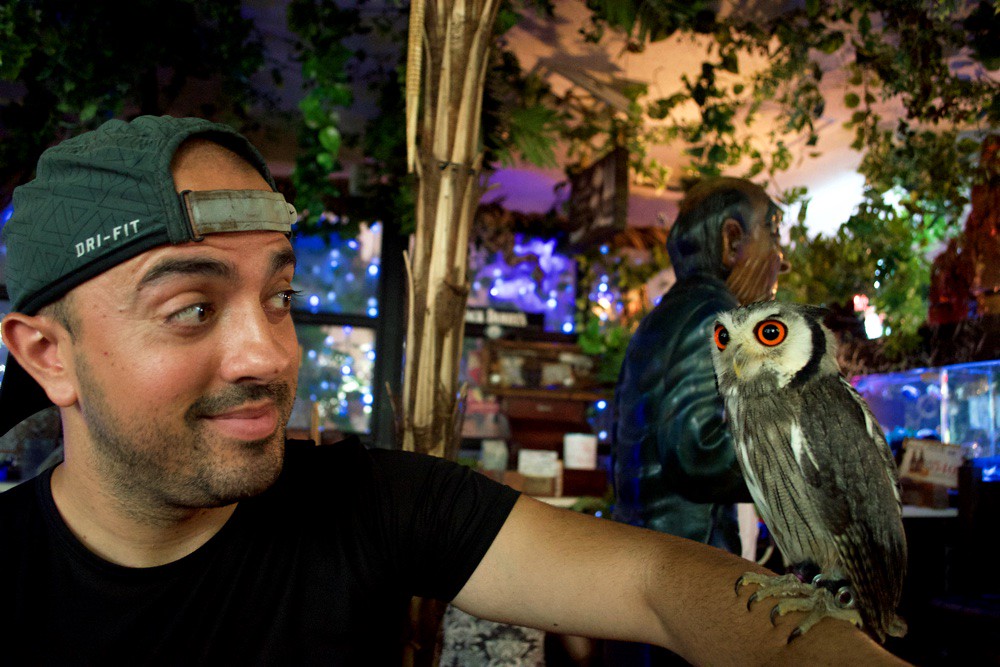 Me and Pino, at Owl no mori cafe in Akihabara. 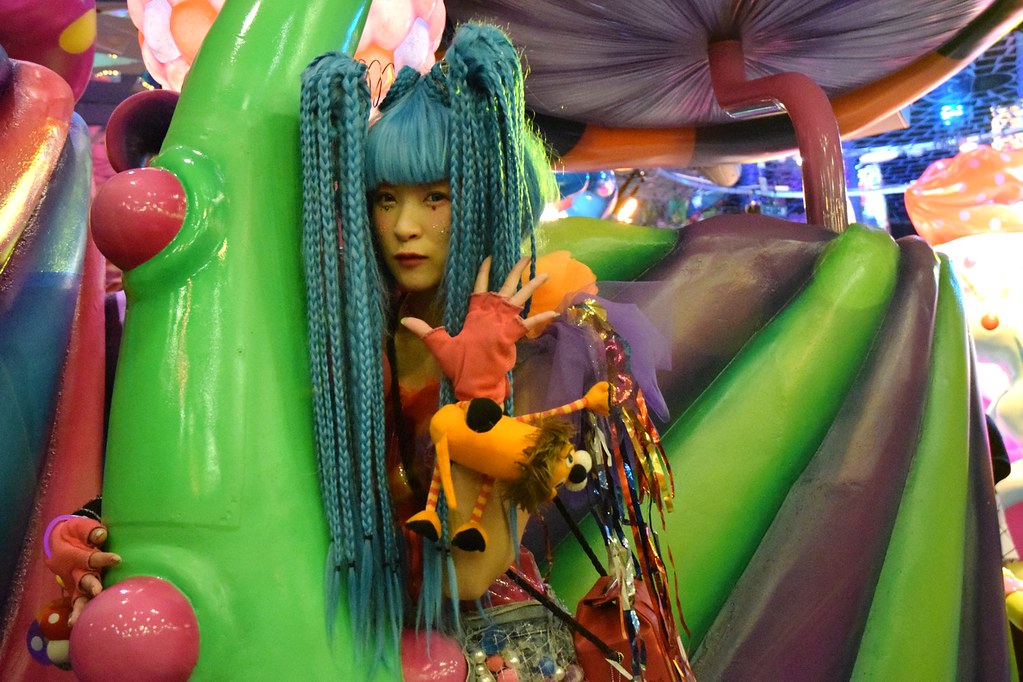 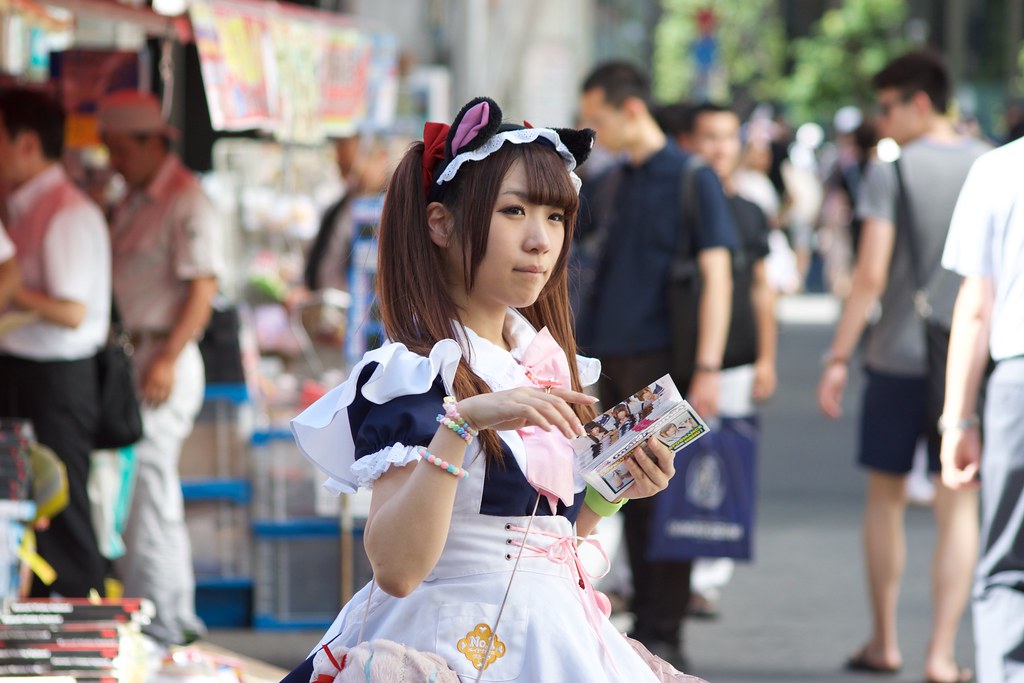 Maid on the streets of Akihabara.

When it comes to food, many tourists agree on this point. Thanks Japan for making plastic food and putting it on display in front of your restaurant. Makes things so much easier, and before you sit on the table, probably already decided on that delicious looking bowl of Katsudon they have on display. The vending machines at the entrance of many restaurants is, too, a weird and uncommon thing for tourists. There are many that come with the picture and name in english of the set menus, but so many others are written only in Japanese and makes it hard for tourists to risk their meal on a bad choice on the vending machine.
Once you’re on stand by at the table or counter, you’ll get a piece of small and wet towel. This is the oshibori, and is for you to wash your hands before eating. Even better when it’s really cold on winter time and the towel is warm.
If you chosen a local noodles restaurant, you’ll notice the sounds around. Slurping your noodles is common practice, and many tourists see that as unpolite. Au contraire, my friends. Slurping your noodles is practical (to cold a bit the noodles) and to show respect for the chef. The louder, the greater meal you’re having. 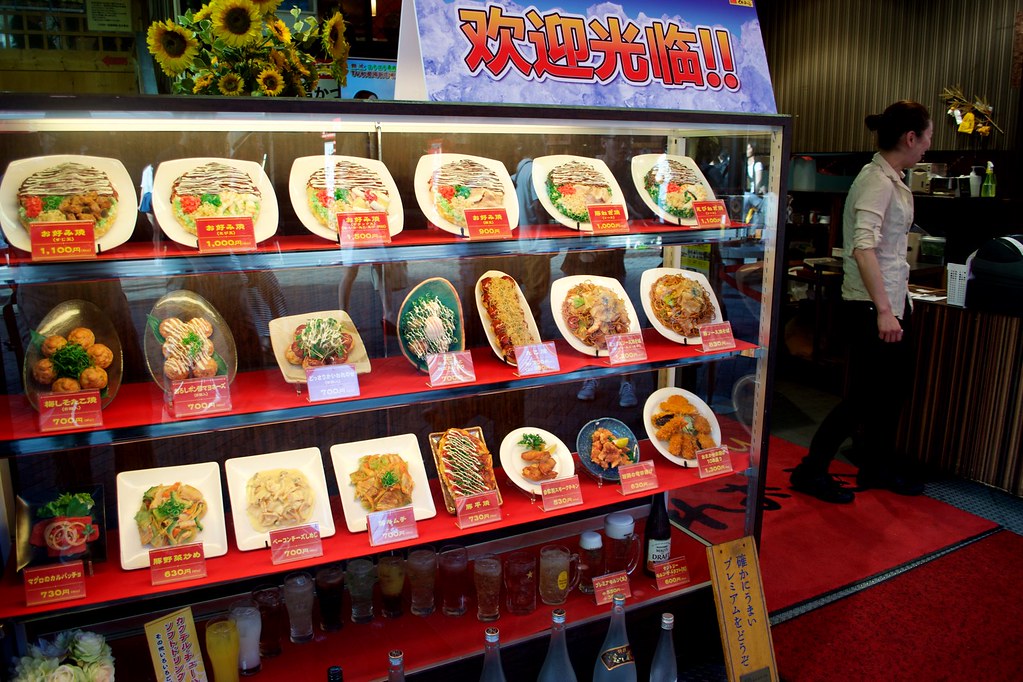 Plastic food display in front of a restaurant in Dotonbori, Osaka.

Why is it that every person I met knew about the “lingerie vending machine”? and even think that these machines are in every corner. Far from that, I’ve only seen one of those, and it was in an already enough quirky place, the Don Quixote shop in Akihabara. Still, you can find many other things on vending machines, and there’s one drink vending machine in Tokyo every 50 meters. Food, soups, merchandising, and even fresh eggs (Saw that once out of Tokyo).
Why are they wearing costumes? is a question I get a lot when walking around Harajuku. Don’t be confused with people cosplaying (people that meets at some spots of Tokyo dressed as their favourite manga character), with people walking around Harajuku. Is the craddle of new trends and fashion, and there are several styles that outstand for tourists when they walk across.
Where are the trash boxes? And why is it so clean? That’s another question I hear a lot. Tokyo looks like one of the cleanest cities, and still has no trash containers. The recycling system, and the people discipline of not throwing trash help a lot. The collective thinking of “I want it to be clean, so why I should throw away trash and make it dirty”, that’s wonderful. Japanese care about their cities.
Probably you’ll find huge mascots at some places wandering around, promoting a shop or tourism board. The mascot phenomena is something that escapes my understanding of showbiz, but sure they’re cute, and watching a Pikachu parade is something you only see in Japan. 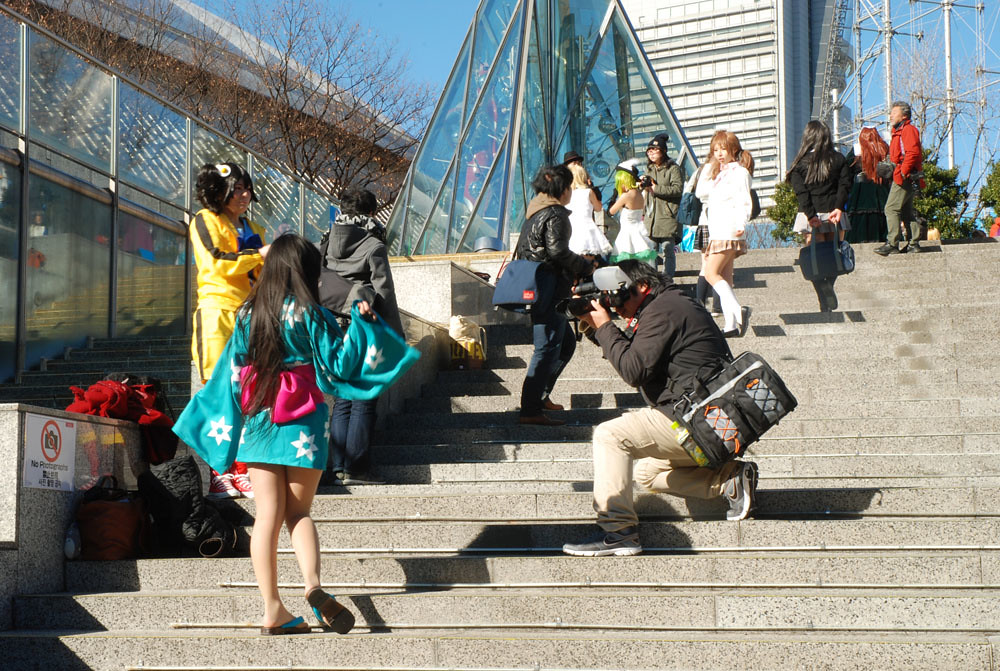 Cosplay or not? You can be sure that if they go with their own photographers, it’s a cosplay session. 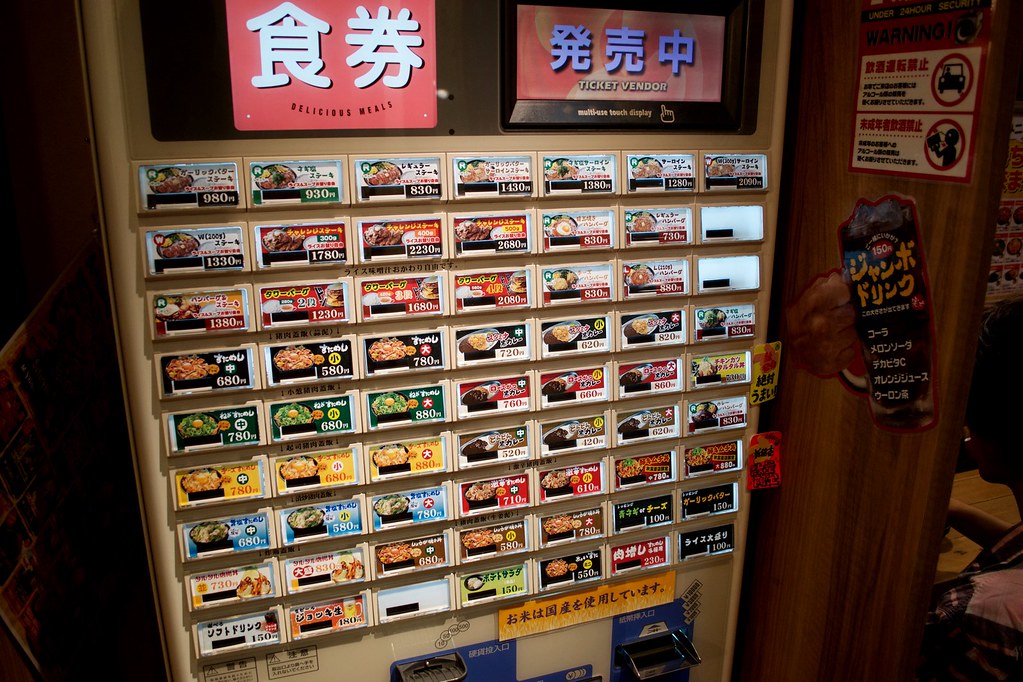 There are tons of shops that have a small statue of an animal in front of it. This is a similar believe as the manekineko the money cat that has a coin in one paw and salutes customers with the other. It’s a question of good luck and believe. Or simply because they’re cute to have.
The “Engurishu” is the funny name to adress to all the signs written in weird English. Many times this are signs translated literally from the Japanese, losing or changing the meaning. Other times is for grammar or gender mistakes. That still amazes me, to find so many places with engurishu, makes me grin. But Japanese have the funniest signs I’ve ever seen. No smartphone walking. No upskirting photo. No selfie stick. 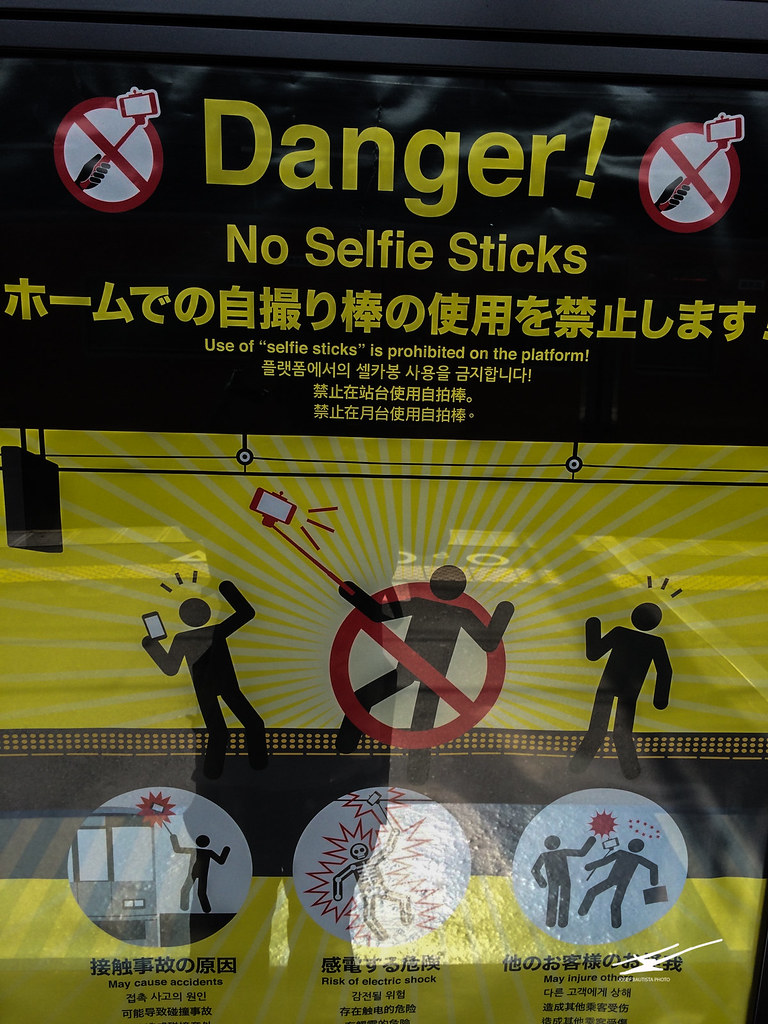 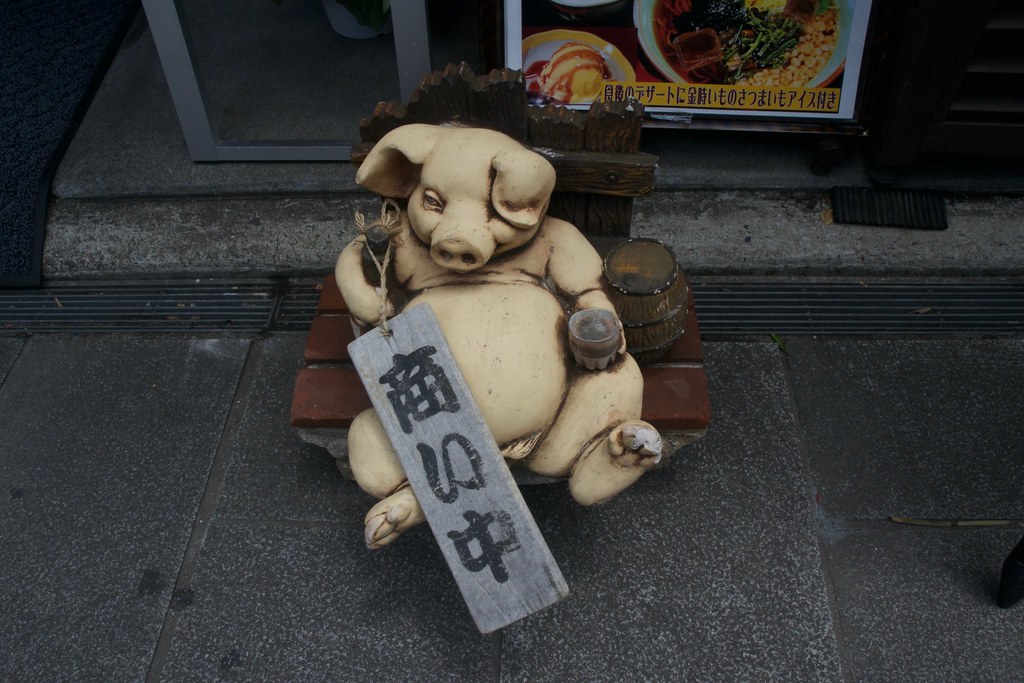 Animal figures in front of shops has different meanings in Japan. From good luck, business, to the local mascots and cute figuriens.

Few weeks ago I saw on Youtube a video of really low profile tourists freaking out with Pepper, the robot assistant from Soft Bank. They were singing real loud and laughing, so, of course, they became the center of attention, instead of the confused robot that didn’t know how to react under such pressure. Robots are everywhere, assistants at shops, vending machines, information points, hotel receptionists. The famous Robot Asimo performs everyday at the museum Miraikan in Odaiba. Even the whole themed Robot Restaurant, which I visited twice. More showgirls than robots, but still, quite the visual show. Maybe the humans (specially tourists) in Japan are the weird thing to see now. 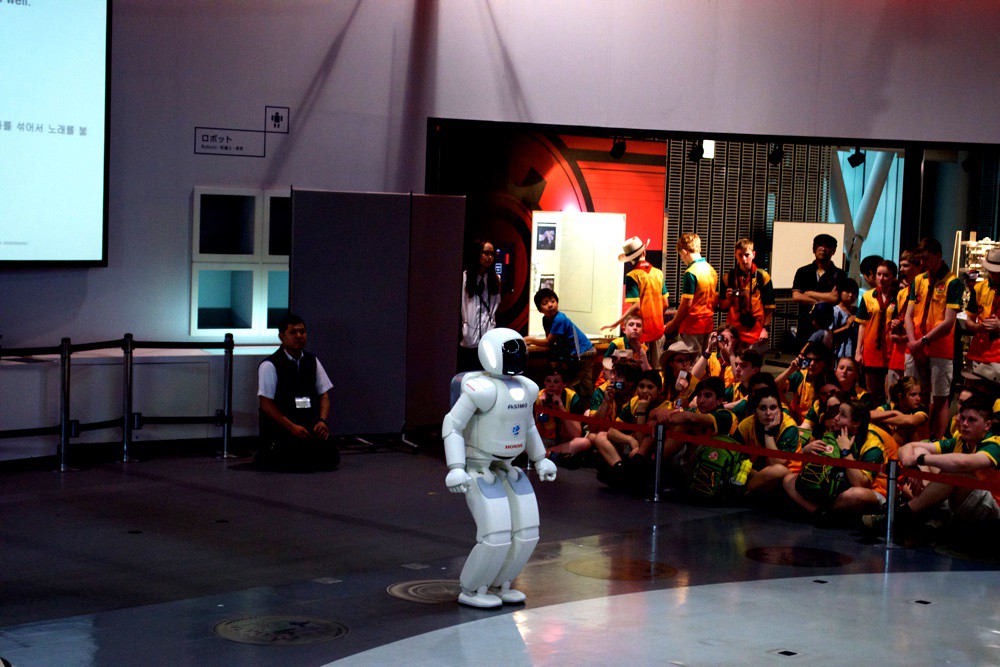 Asimo has a legion of fans, and performs at Miraikan museum. 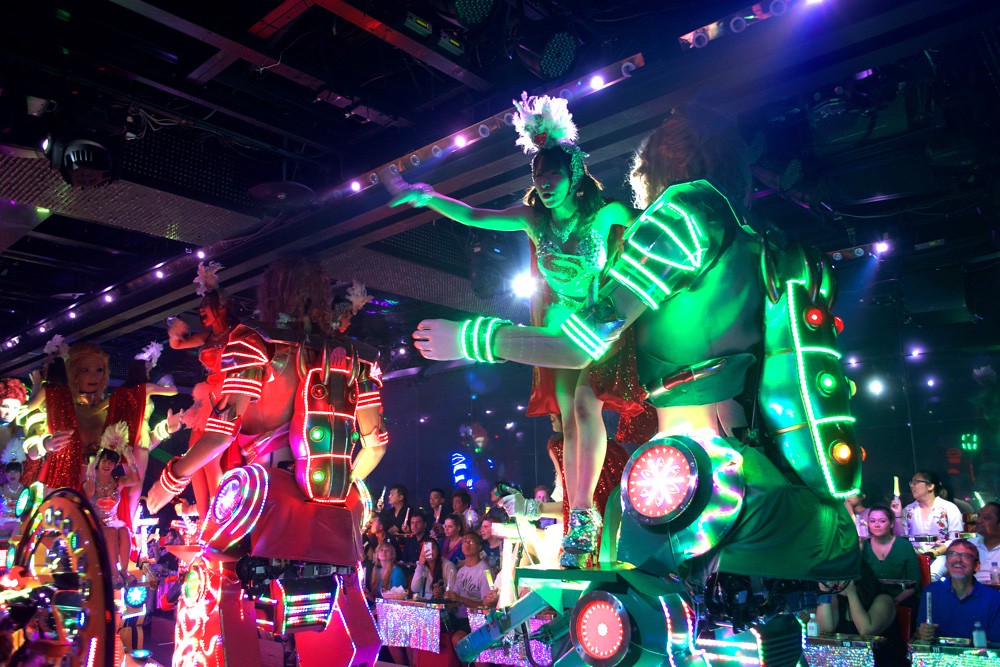 Robot and showgirls at Robot Restaurant. 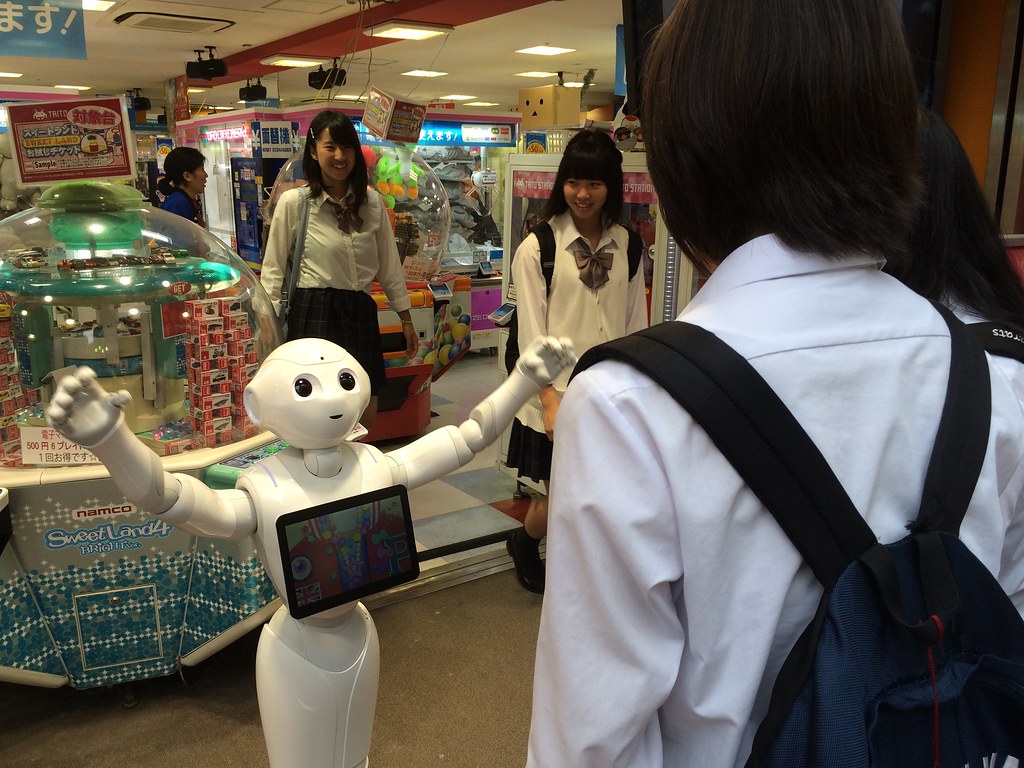 Come at me, sis! The tourists are weird!

Do I have to get naked in the onsen? That’s a common fear for shy tourists. The straight answer is Yes, you have to. The trick, you can cover your noble parts with a small towel while you walk around the onsen.
And the last point of the list, and the one that made me feel in love with something so dirty. Japanese toilets are just great. They come with calefactable seats, music, automatic lits, auto clean, and even music to cover your bowel sounds. The first time I used one, I just couldn’t get out of it, until my phone battery died. 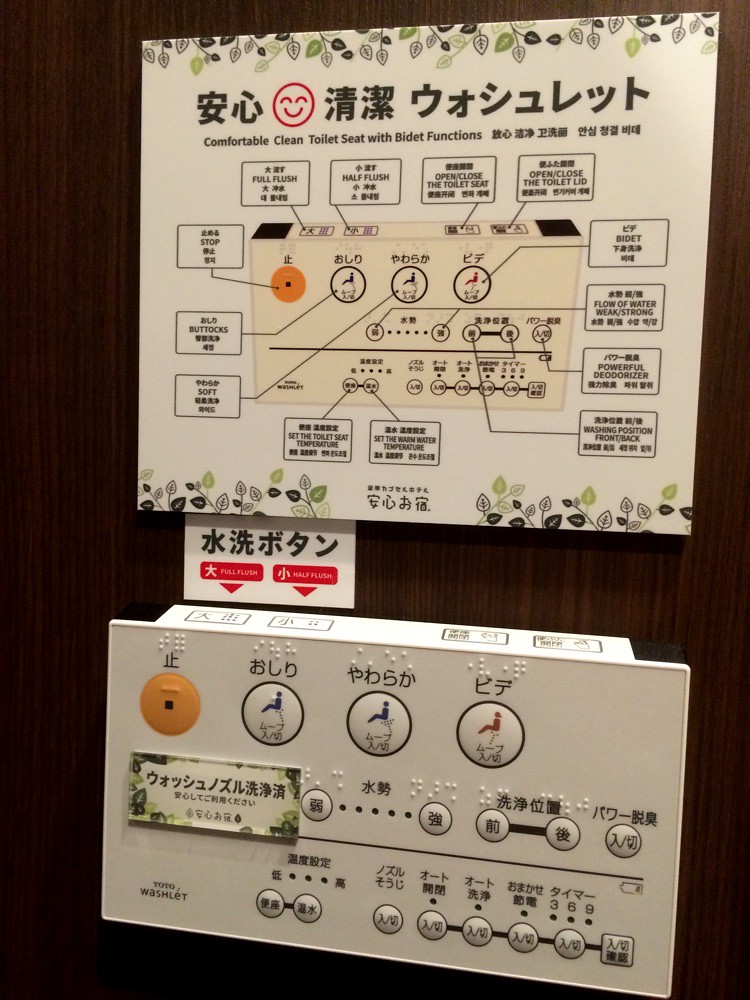 Toilets come with an instruction manual in Japan. Try and error to know what every button does