The city of Barcelona grew through centuries to its actual state, but the core of the city remained, and remnants of past times are still open to the eye of every person that steps into the Gothic Quarter. The amount of historical spots and relics is so vast, anyone could spend a whole day visiting all those places and still not uncover everything. I can’t count the times I’ve been in the gothic quarter, I’ve even studied in a school there for some time, and everytime I found a new corner to observe, a new stone to uncover. Last time I visited during the “Festes de Sant Roc” the gothic quarter summer festivities, held every august. Follow me in this walk through history, and let me know in the comments about your impressions or other hidden spots to know in the Gothic Quarter. 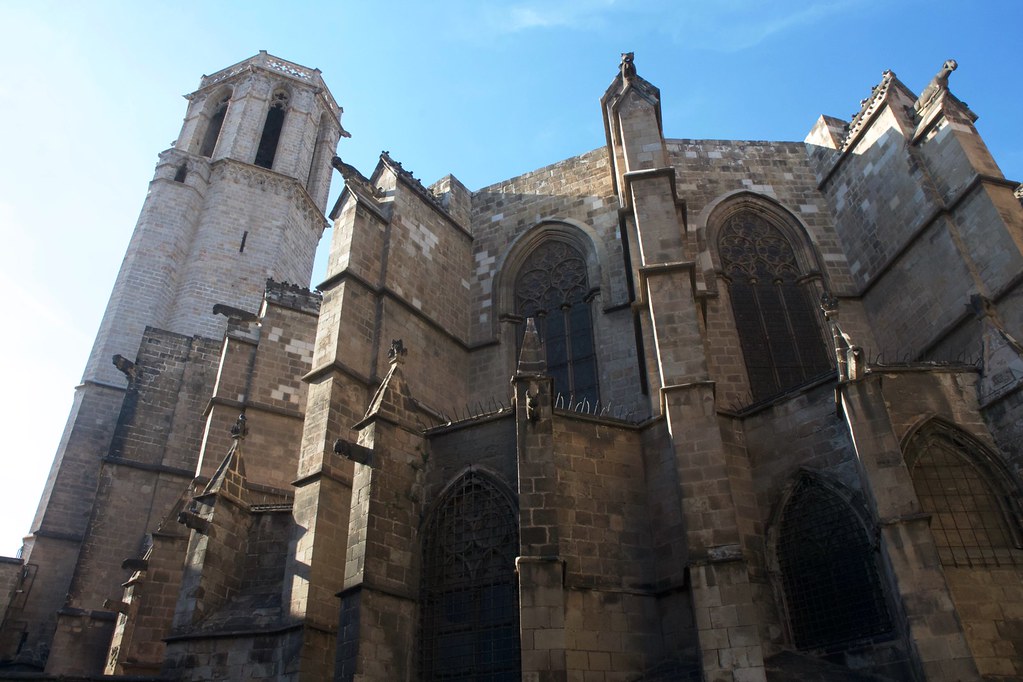 Barcelona’s cathedral view from behind.

From Plaça Catalunya, as starting point. Walking down the shopping street “Portal de l’Àngel”, at the end of it lies Barcelona’s cathedral. The Gothic quarter limits are within the streets of La rambla, and Via Laietana. 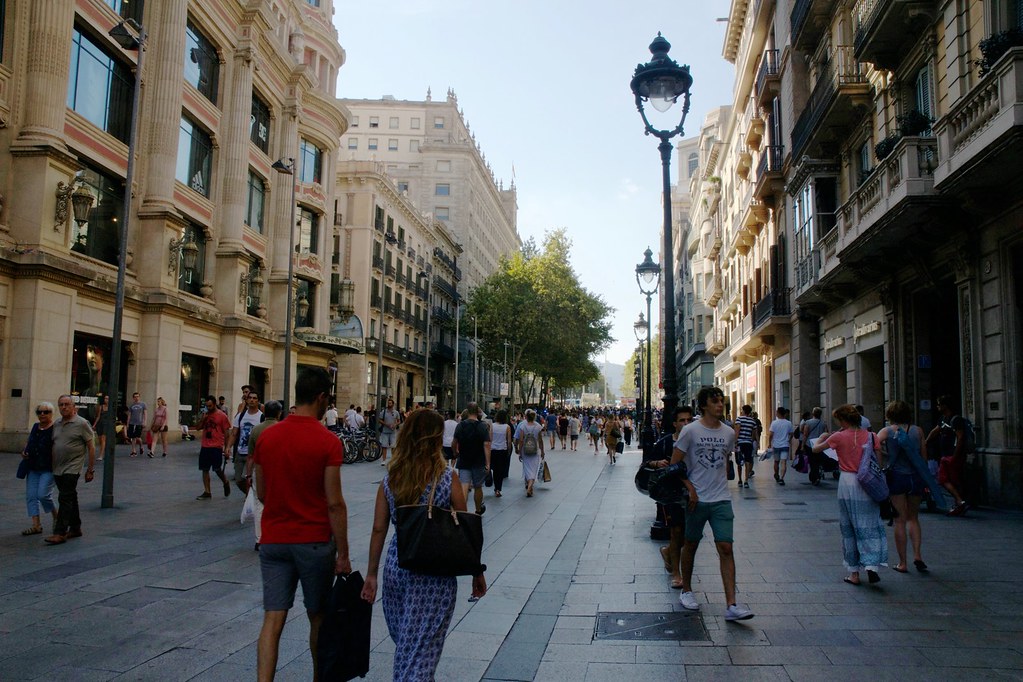 Barcelona’s cathedral and Plaça Nova
The first stop, to see all the crafts shops in front of the cathedral. For the festivities of Sant Roc and other events, lines of provisional stands with crafts and traditional food occupy the center of the square. To get into the cathedral inner gardens, might better head up to the lateral door entrance from “carrer del Bisbe”. At the inner garden, lots of goose welcome the visitors. Step into the cathedral for an impressive interior and leave from the main entrance. 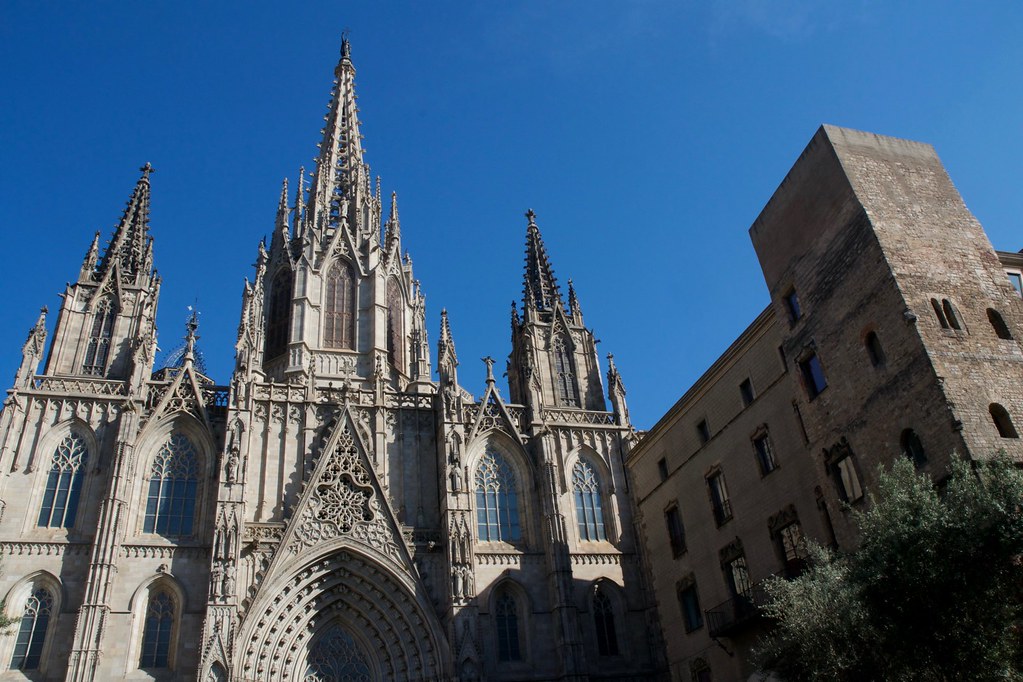 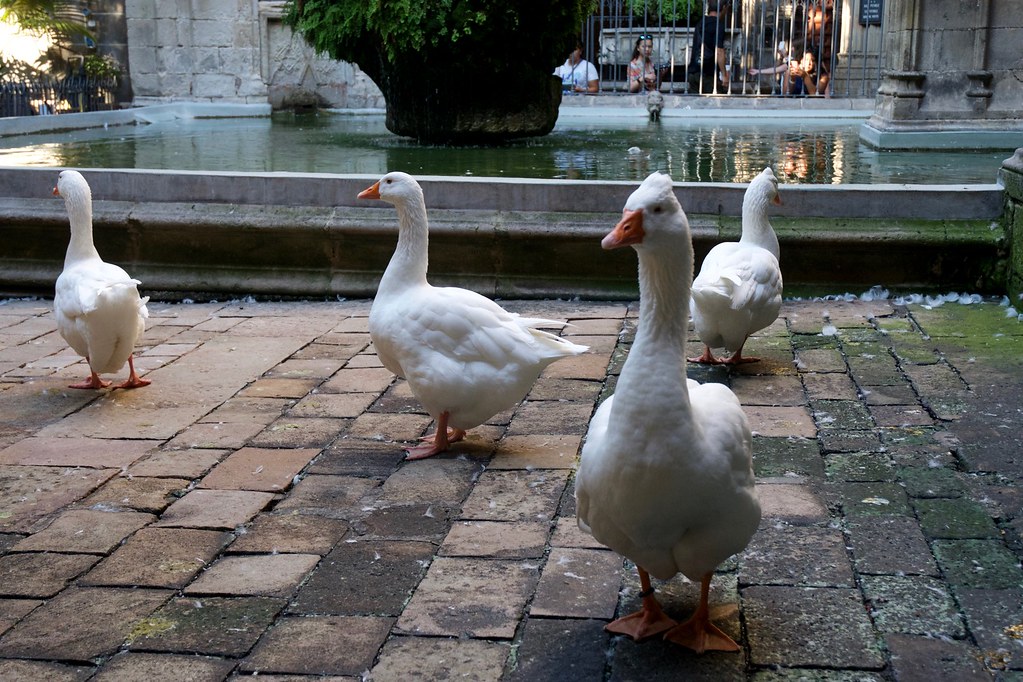 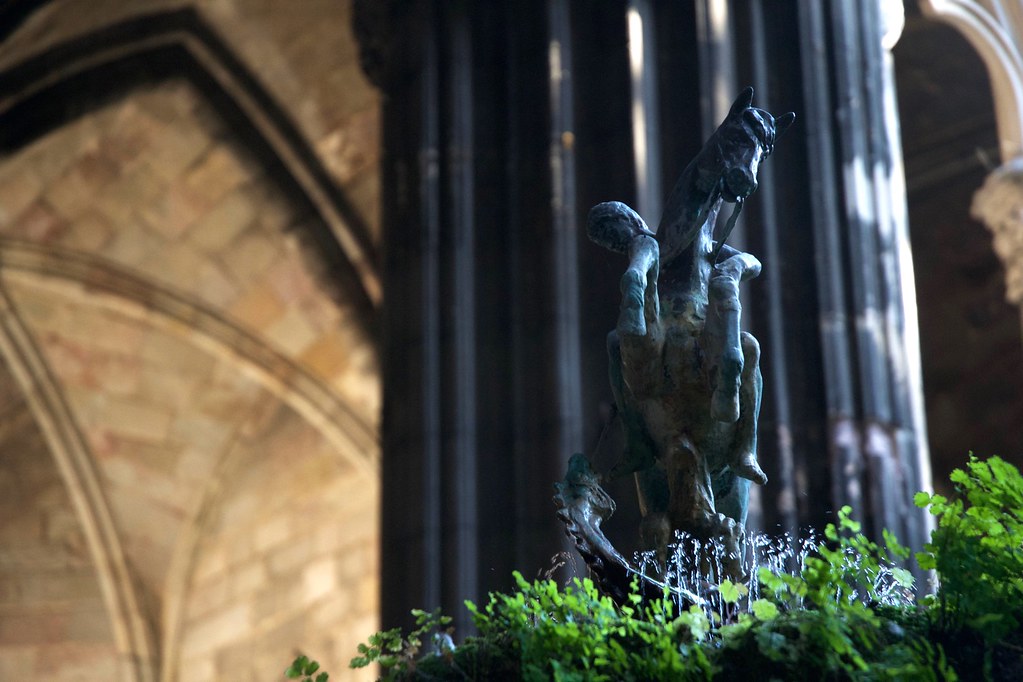 Festes de Sant Roc
The oldest festivities of Barcelona, since 1589. the Gothic quarter boils with activities, concerts, crafts and folfklore during five days every August. 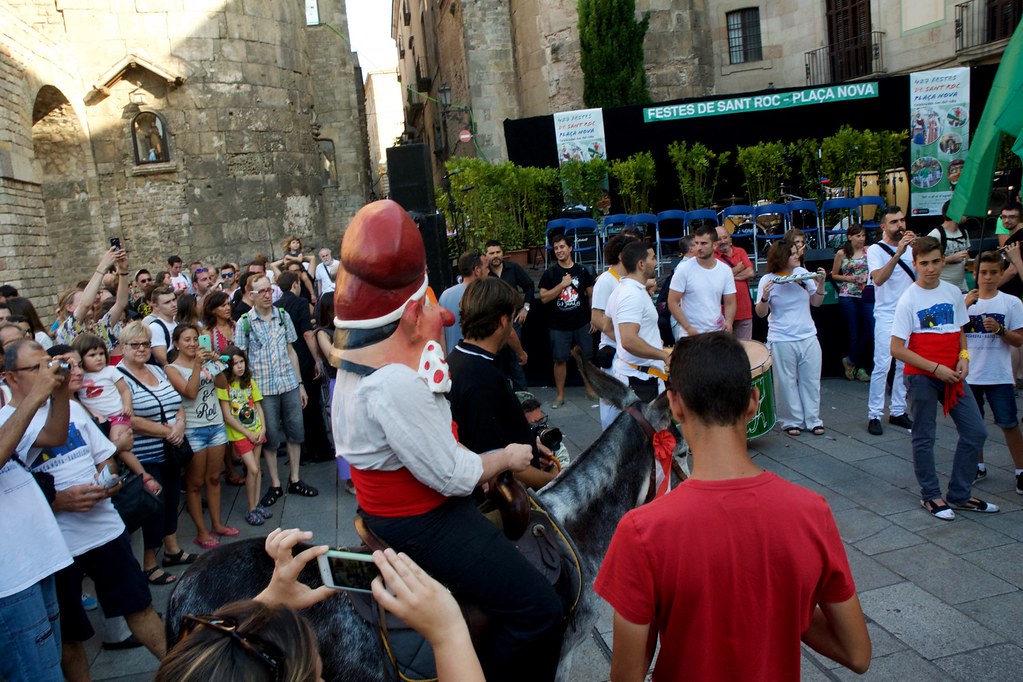 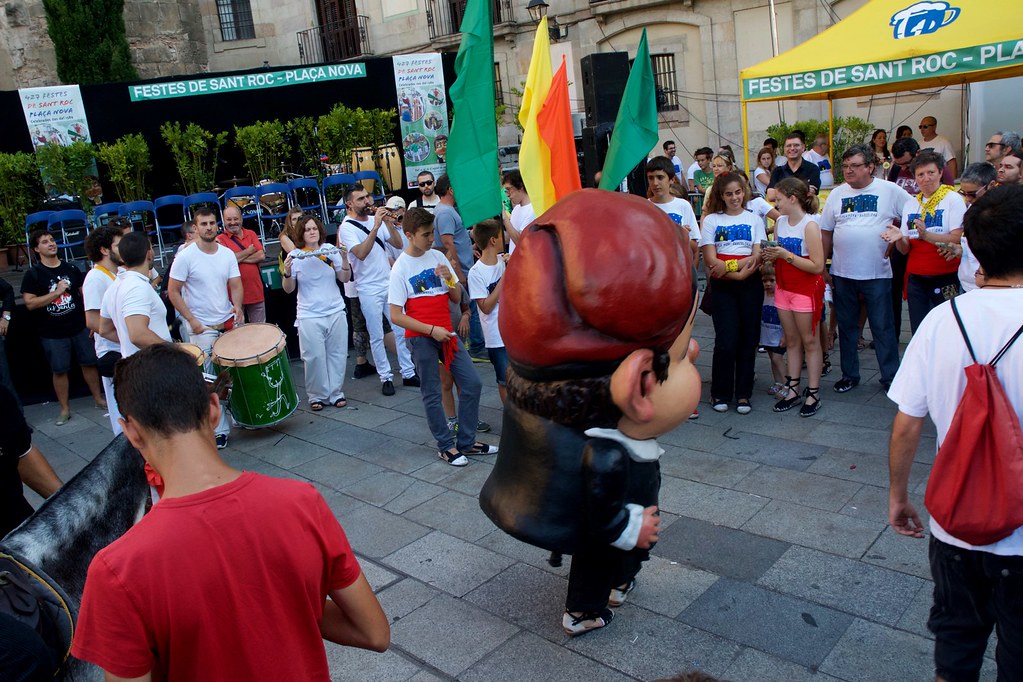 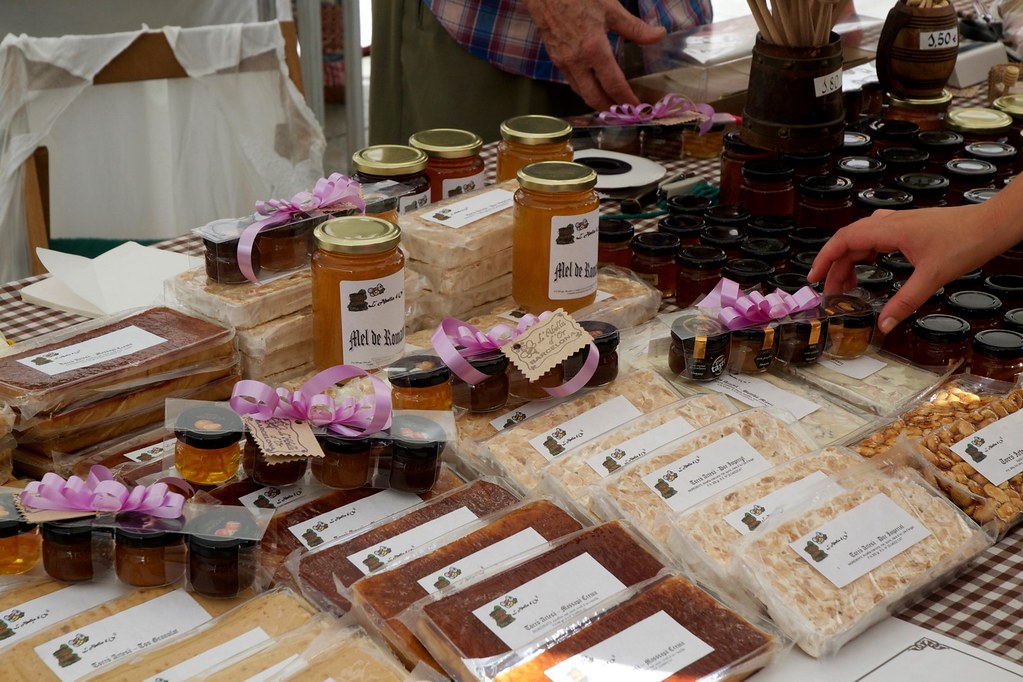 Traditional food and crafts during the festivities of Sant Roc at Plaça Nova, in front of Barcelona’s cathedral.

Plaça de Sant Jaume
Back into the narrow street “Carrer del Bisbe” next to the cathedral, it takes you to Plaça de Sant Jaume, where Barcelona’s City Hall and the Presidential Palace of Catalunya buildings are in front of each other. On special occasions, the city Hall opens its doors to visits, like April 23rd, Sant Jordi. From here on, the route to follow is completely free at will to explore. My recommended route if it’s your first time in the district can be done in any order, as the spots are within walkable distance within the narrow streets. If you’re hungry, stop at Conesa, in one corner of Plaça de Sant Jaume. One of the best sandwich places from Barcelona, for a quick bite. Hidden in the street next to it, at the end of a corner, there are the remains of a Roman era building. The Temple of Augustus, where now only remains four of the columns of the ancient times. 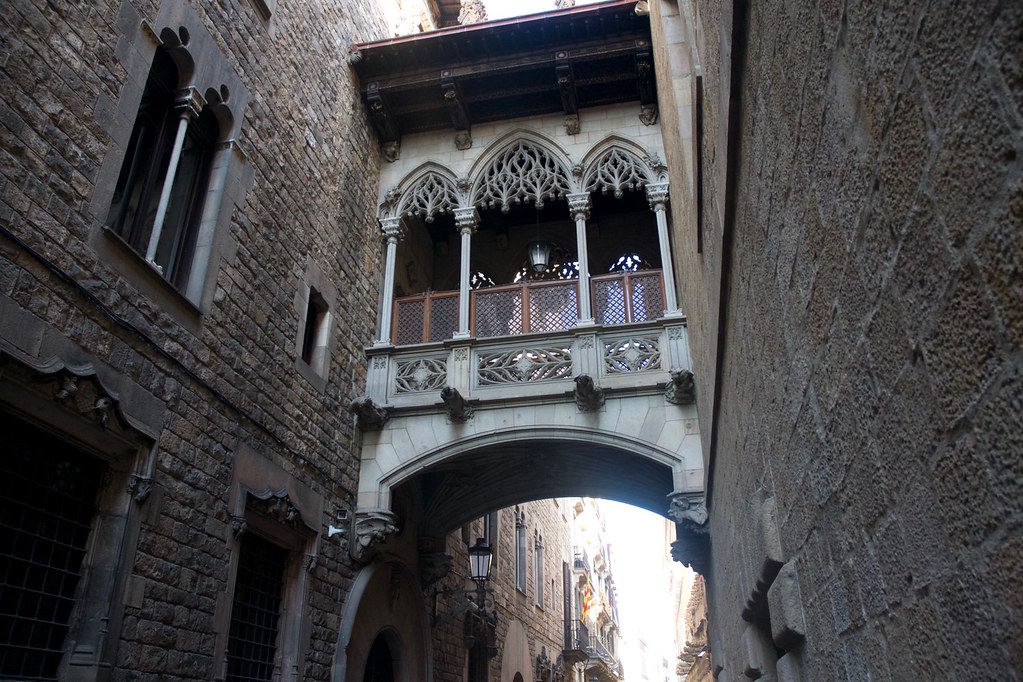 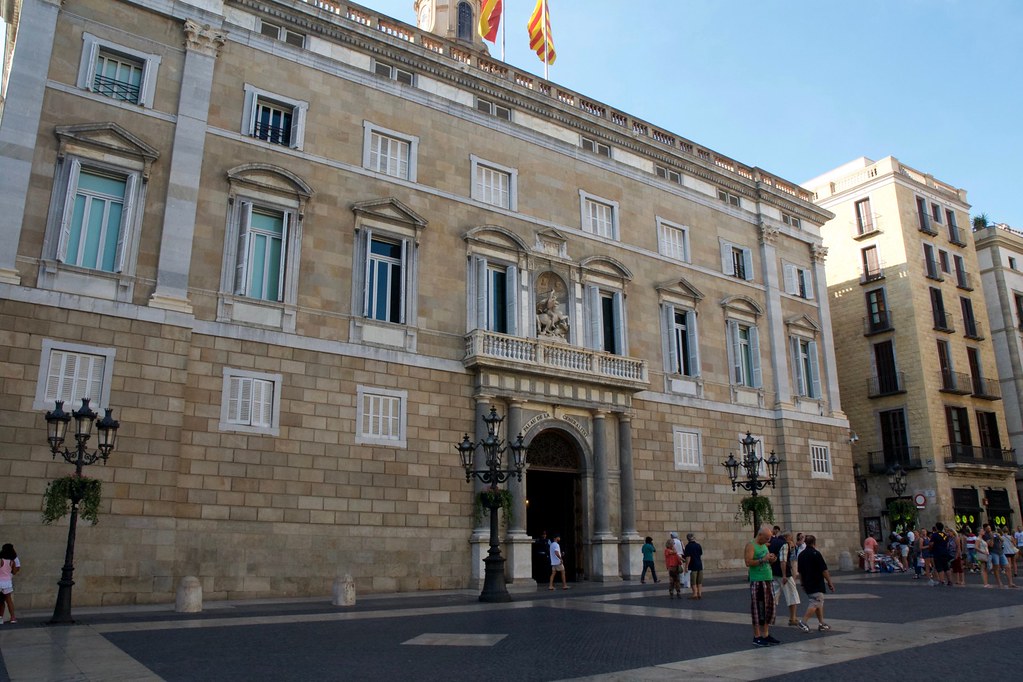 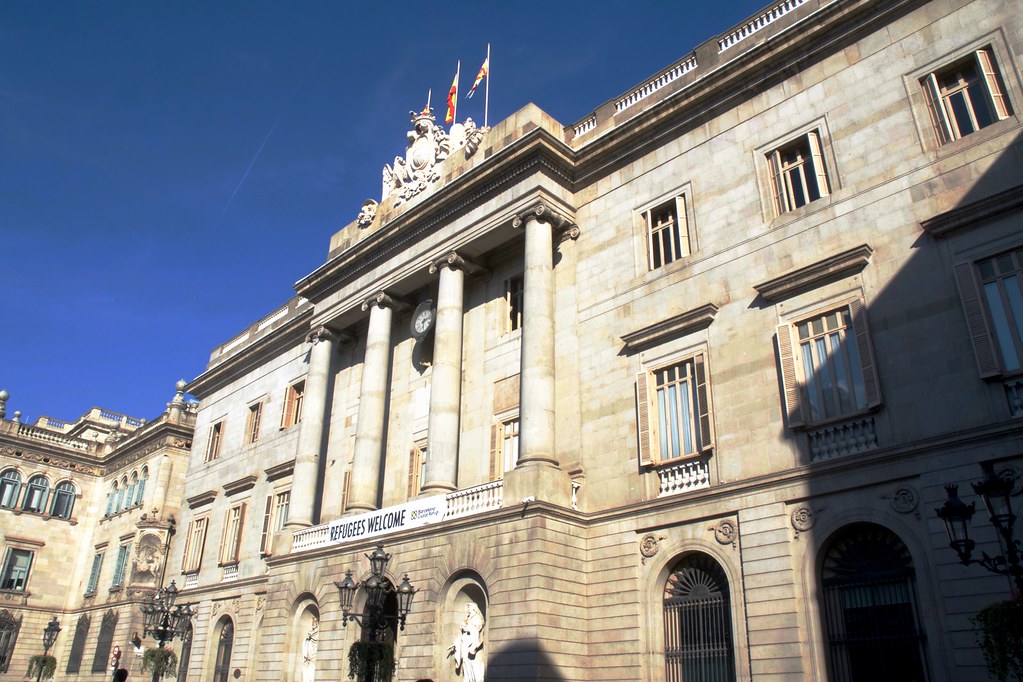 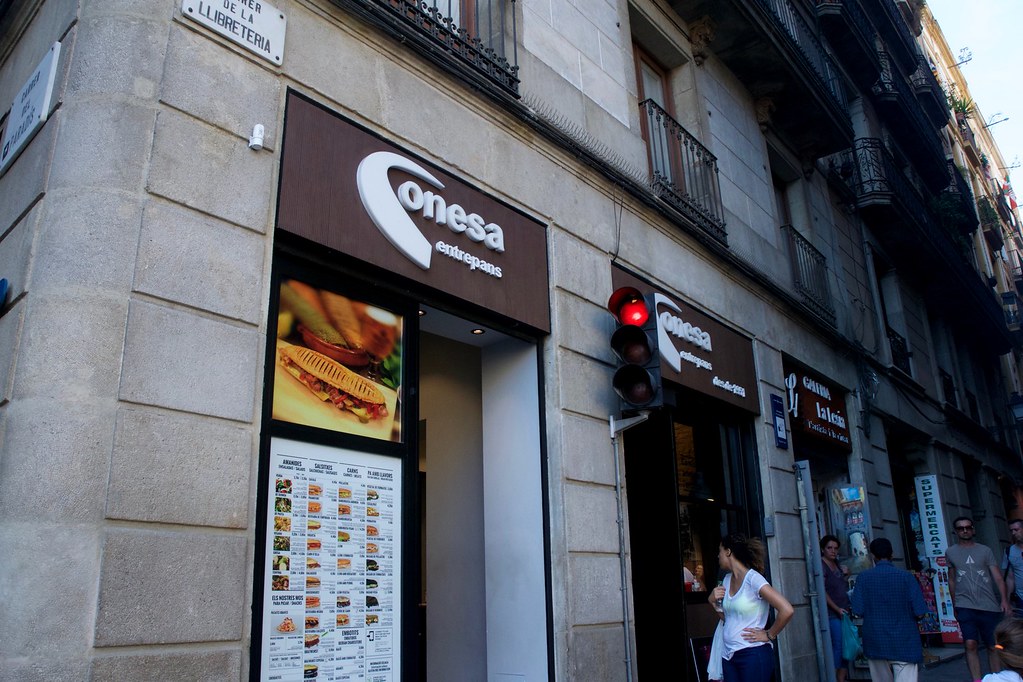 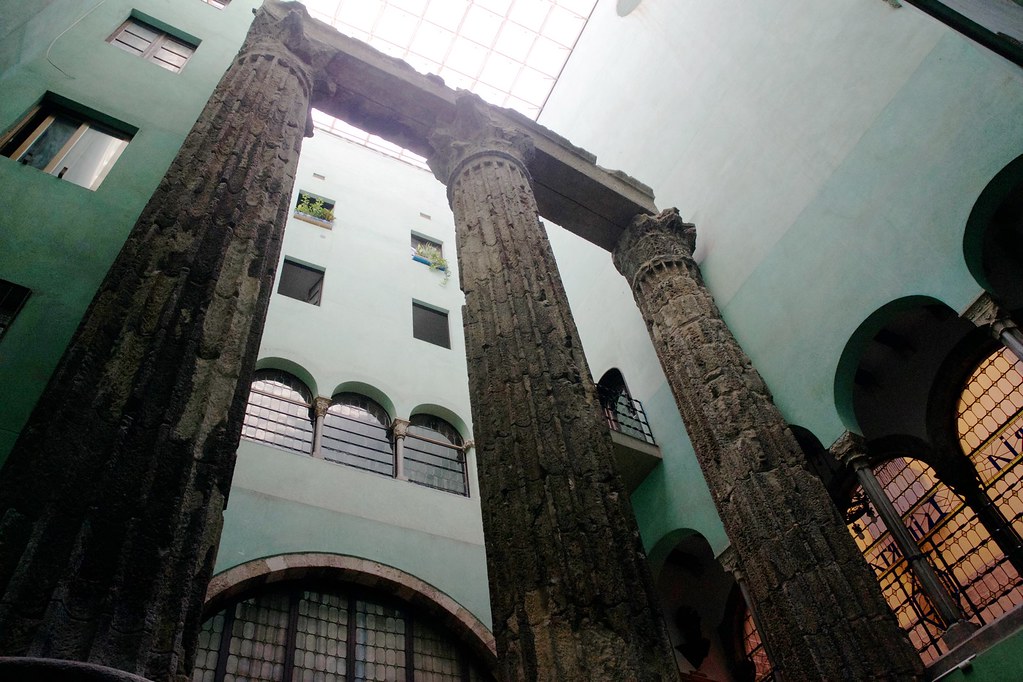 Temple of Augustus, hidden in the gothic quarter of Barcelona.

Plaça del Rei
Walking direction to Via Laietana, the history continues. At Plaça del Rei, building remnants of the royal residences of the Catalan-Aragonese monarchs. Right under the square, from a small window, can get a glimpse of the Roman remains of Barcino, ancient name for Barcelona. The remains are open to visits. 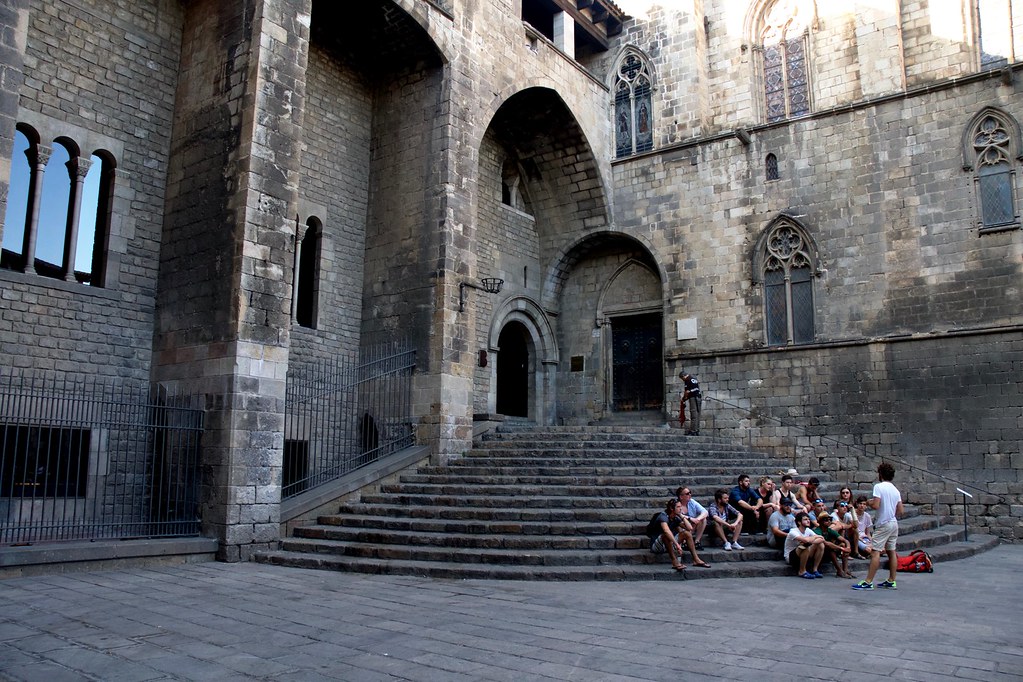 Plaça Sant Felip Neri
In the reconstructed square, there’s a powerful remain of recent history. During the Civil War, one of the bombs exploded here, and left the state of the walls as it can be still seen nowadays. A memento of the cruelty of Spanish Civil War and history of Catalunya. 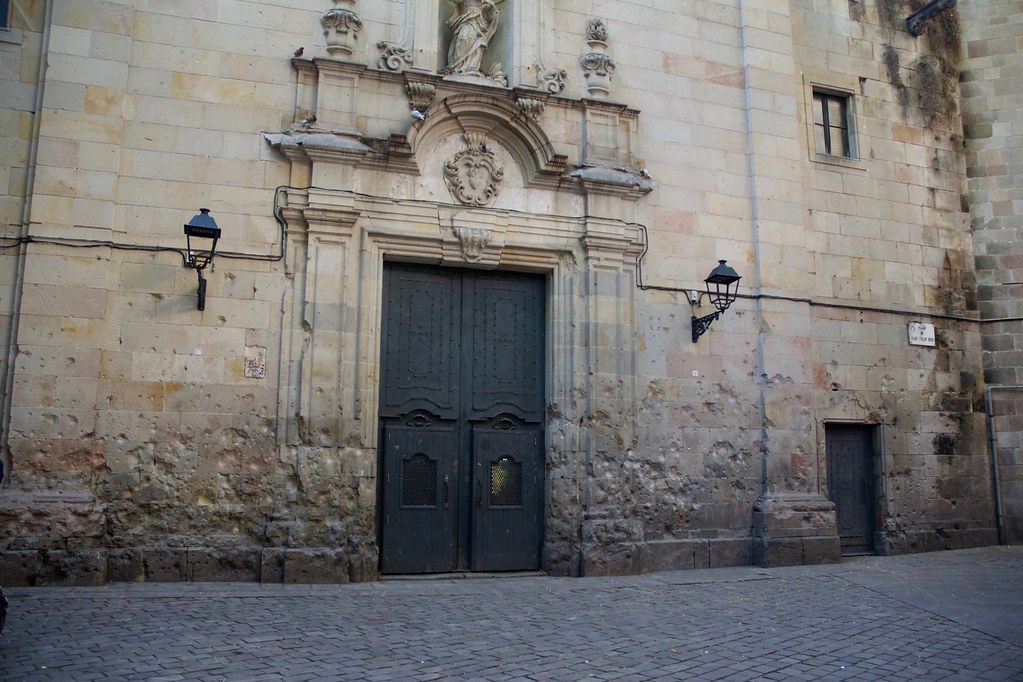 Plaça Sant Felip Neri, Barcelona. The holes in the war are a memento from the Civil War.

Narrow streets
The whole Gothic Quarter is a maze of narrow streets and corners. Entrance to antiques shops in the narrow and dark streets. Remains of centuries of history in every corner. The Jewish quarter was also inside the Gothic and some remains of the old synagogue can be spotted walking. Streets are perfect for city photography. Other churches like Sant Just i Pastor or Esglèsia del Pi are in the Gothic quarter. Exploring the whole quarter is an exploration through times and history of Barcelona itself, where every stone tells a part of the story. 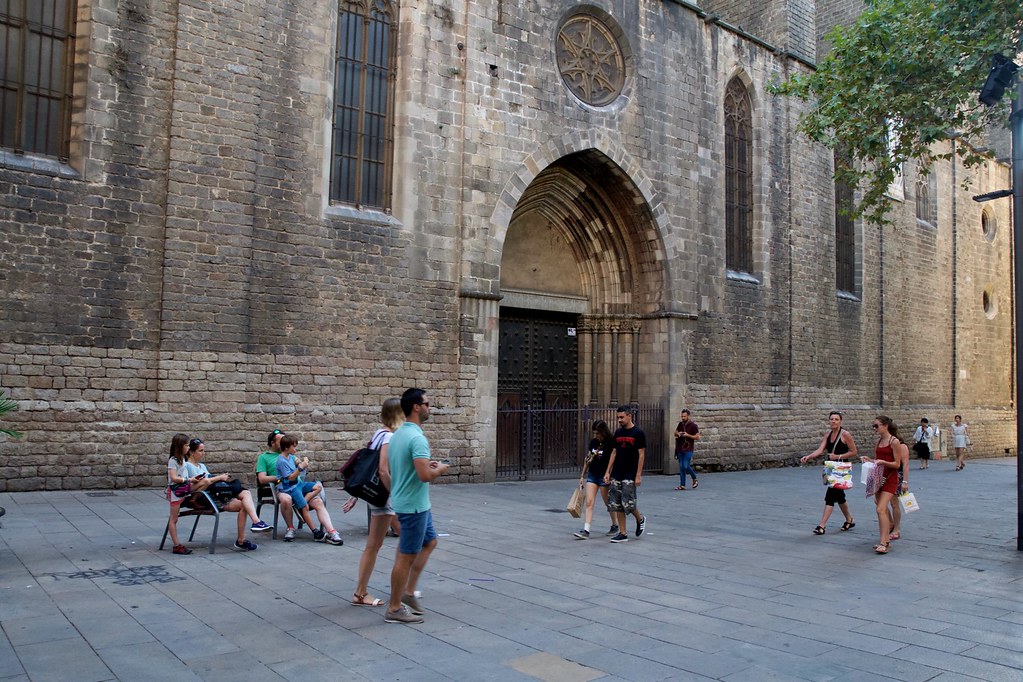 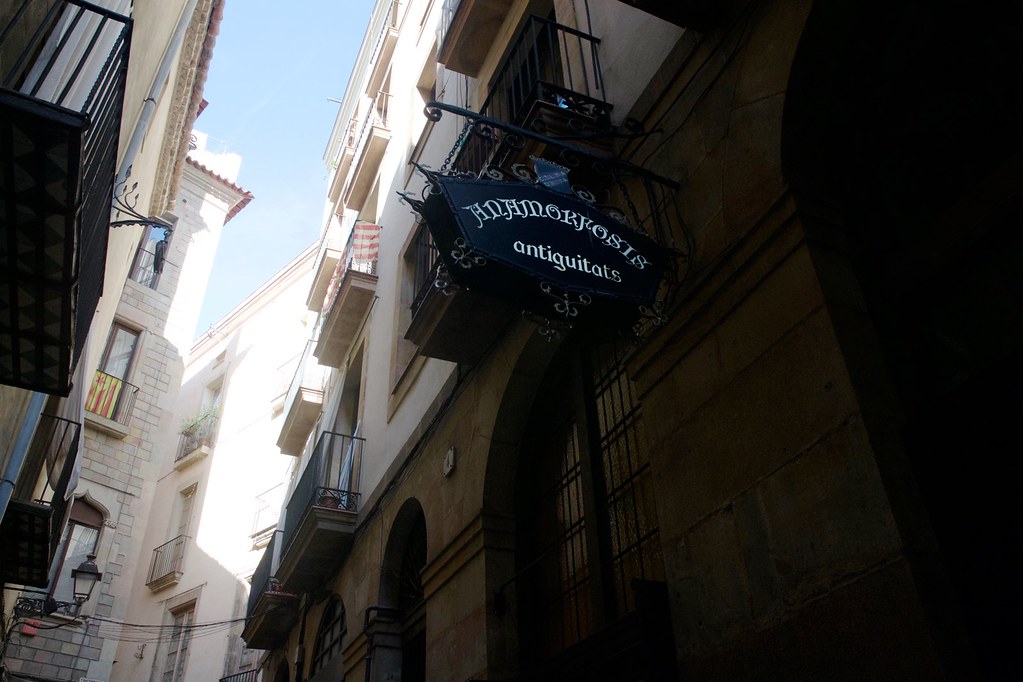 Narrow streets in the Gothic quarter, sign for an antiques shop. 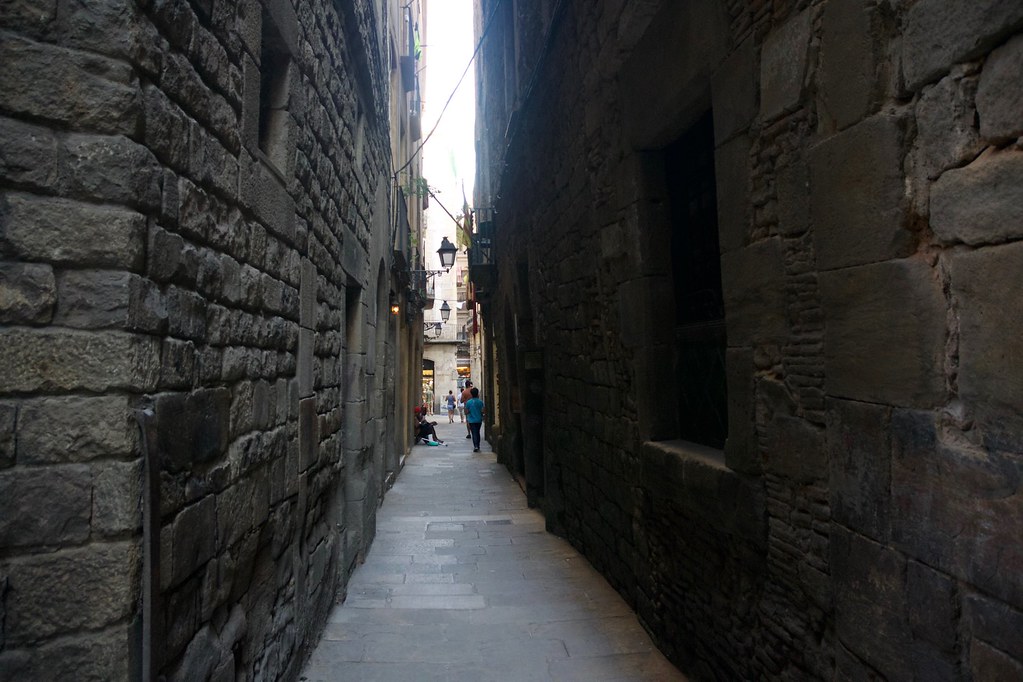