Things to do in Montjuïc

Southwest of Barcelona, the hills of Montjuïc have seen the development of the city from its origins, and has been also an important part of that story. From top of the hill, one can take a look from one side to Barcelona, and the Mediterranean Sea from the other side. As a kid, it was a popular school trip to visit the museums and go picnic. Visiting all the museums in one day is an impossible task, better to select a few of your interest. Here’s a selection of places to see and visit in a walk from top of Monjtuïc to the base, at Plaça d’Espanya. 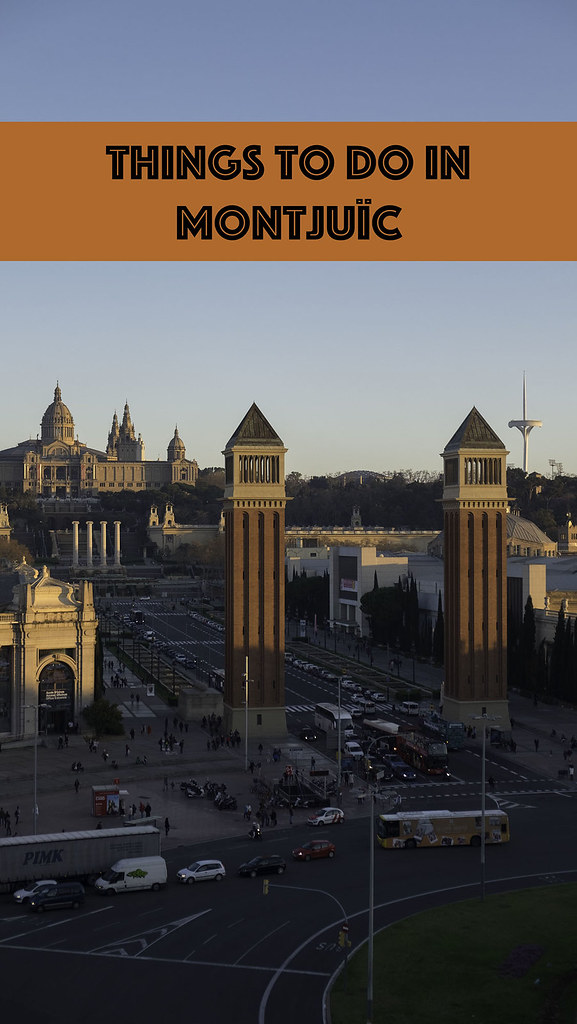 Where to start
Considering Plaça d’Espanya as starting point, to go to Montjuïc castle, take the bus line 150. For a more scenic view, start at the cable car station Telefèric de Montjuïc. From there, you can enjoy the panoramic views of Barcelona for less than €12 with a return ticket, all the way up to the castle, the first stop of the day. You can also check the video version on my Youtube channel. 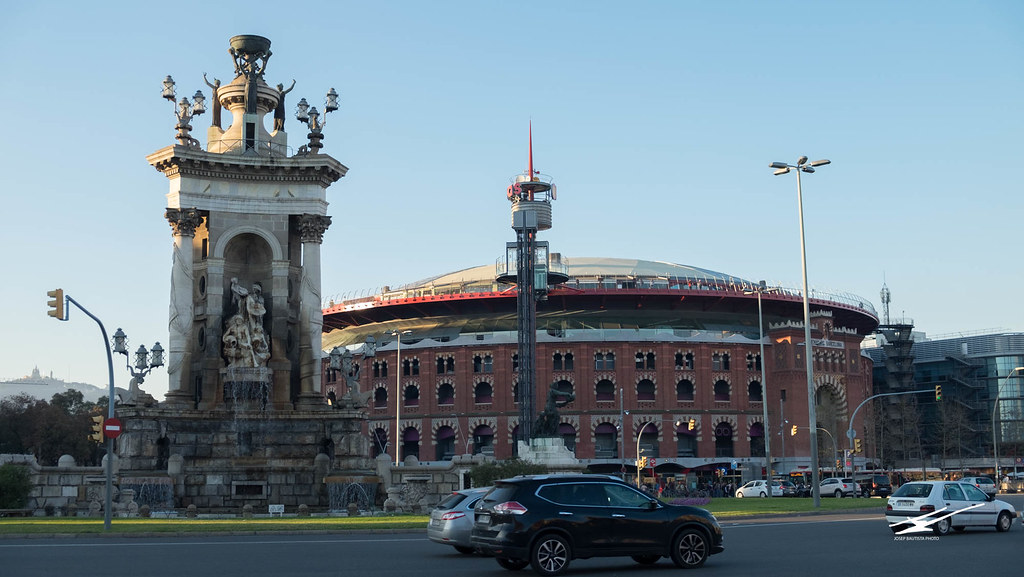 Montjuïc castle
The first frotress, was built in 1640, and just one year later, the battle of Montjuic took place, against Spanish troops. It changed between Spanish and Catalan sides several times until Catalan final lost in 1714. During the 18th century, part of the original fortress was taken down and rebuilt as a more modern fortification. From then on, it became a fortress against its own city, commanded by Spanish troops, the city of Barcelona was bombarded from the castle, and used as a prison and torture centre for political charges for the last three centuries. One of the most important being the execution during the Spanish civil War of the catalan president Lluís Companys in 1940. Nowadays, its a centre for interpretation of history and museum, becoming a more pleasant and quiet fortress for the city. 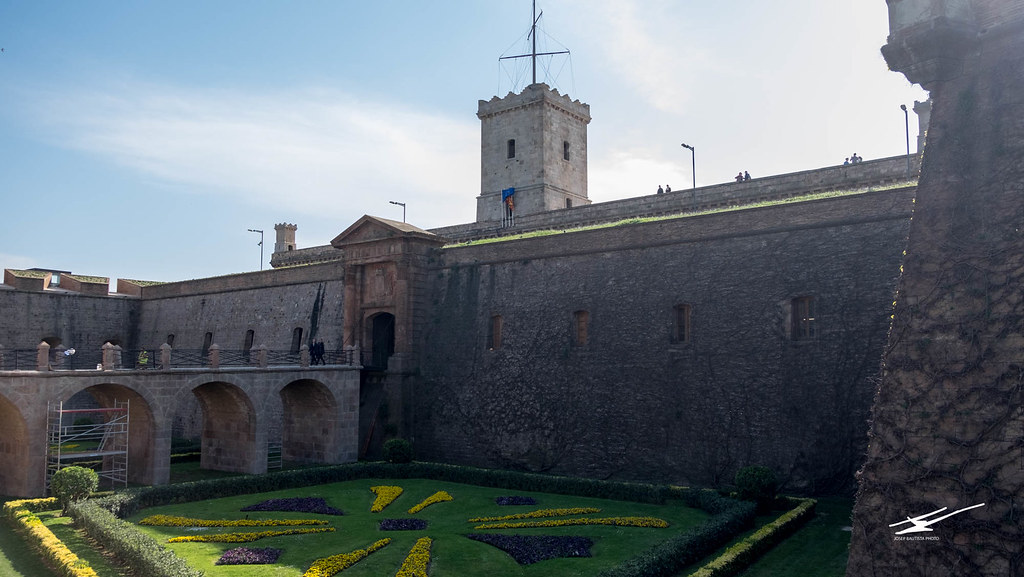 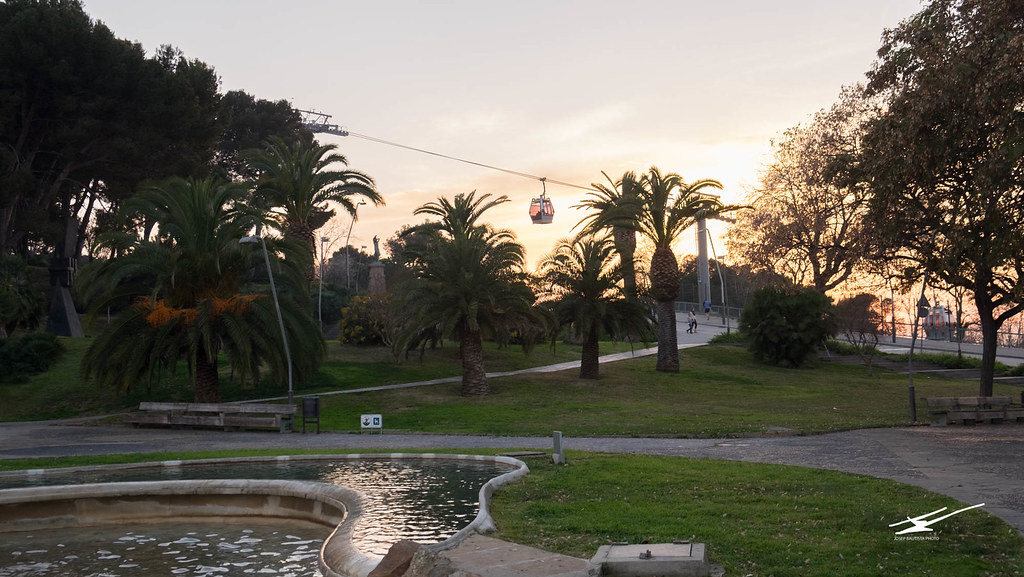 Mirador de l’alcalde
Getting down from Montjuïc castle, from this little park, one can observe the city coastline, and all the way to Tibidabo, on the ohter extreme of the city. The gardens make a perfect spot for a break and picnic. From this point on, you can choose from many museums to visit or walk to the Olympic Stadium. In case you go there in the afternoon, on clear days is a great spot for sunsets. 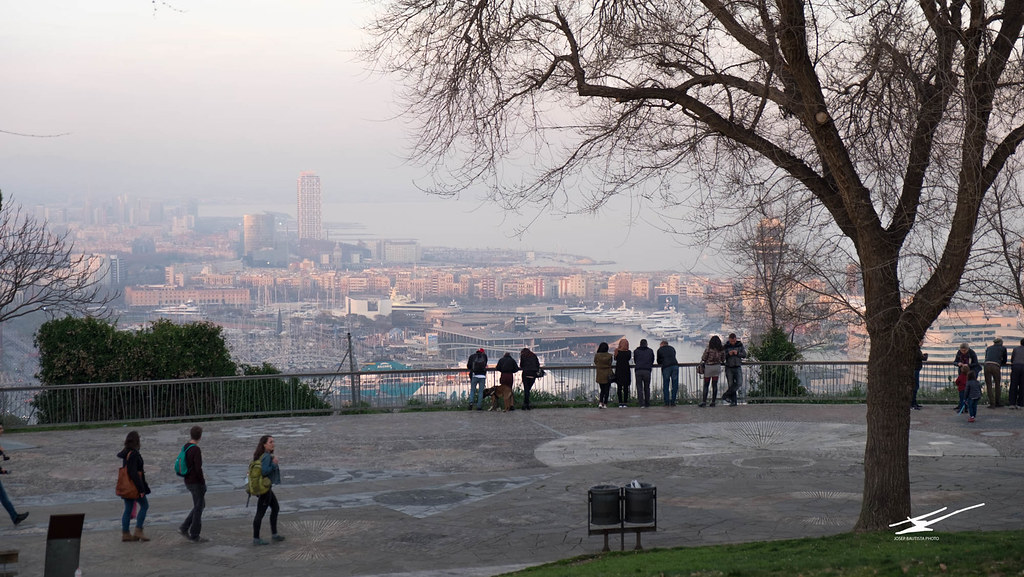 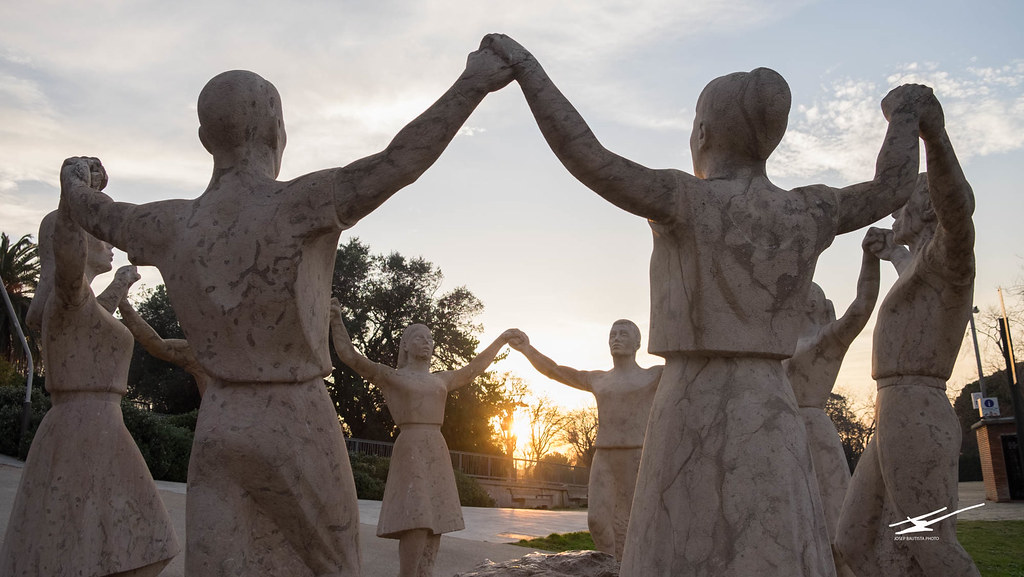 Monument to Sardana next to Mirador de l’alcalde, Barcelona.

Poble Espanyol
This concentrated open-air little Spain Village, was built for the 1929 International Expo, as many other sites in the city, like the Olympic Stadium before mentioned. Representing all of Spain cultures and architecture styles, it also has several crafts shops, bars and restaurants that serve tapas and other Spanish traditional foods. Walking from Andalusia to Basque Country in less than a minute is a unique feature here. Like a small Spain theme park. 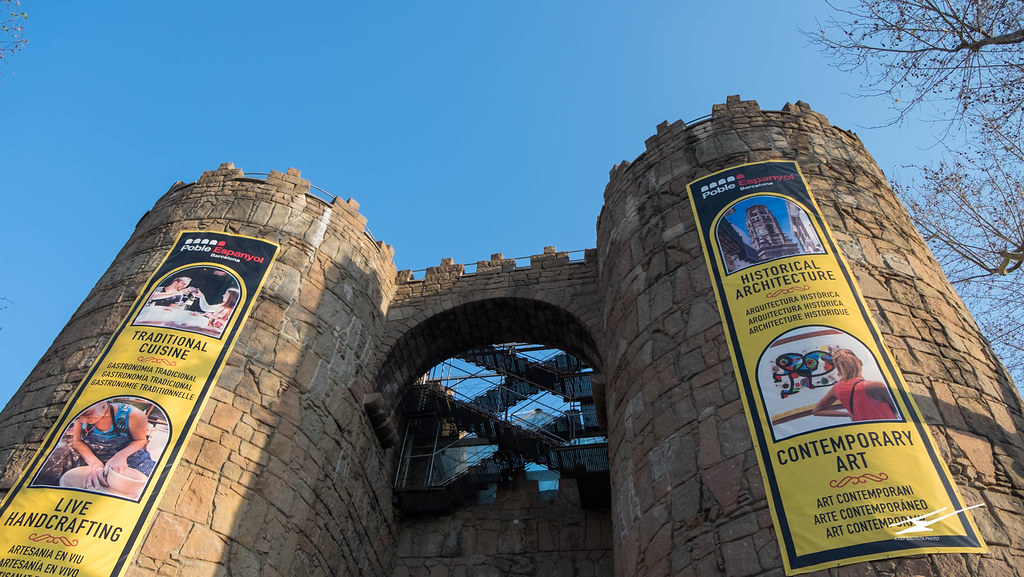 Museums and gardens
The botanical garden is home to a vast representation of Mediterranean species. Walk around or join with your family in the many activities they organize for kids. The list of museums is quite long to try visit all of them in a day. The biggest is the MNAC (art museum) and only that will take a whole day to see it completely. Fundació Joan Miró, the Olympic museum of sports, CaixaForum, or the pavilion Mies Van der Rohe complete the sample of museum in Montjuïc area. 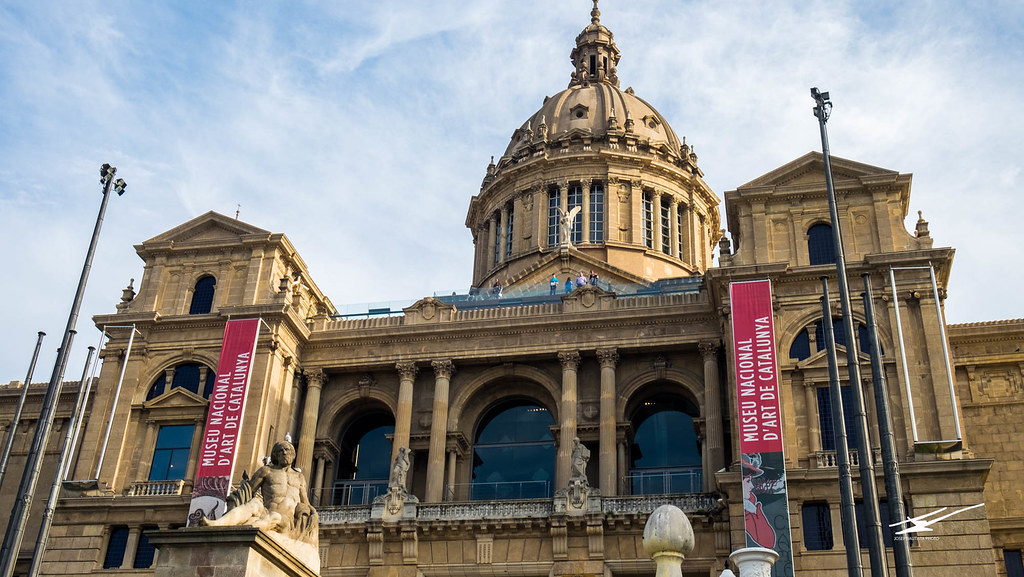 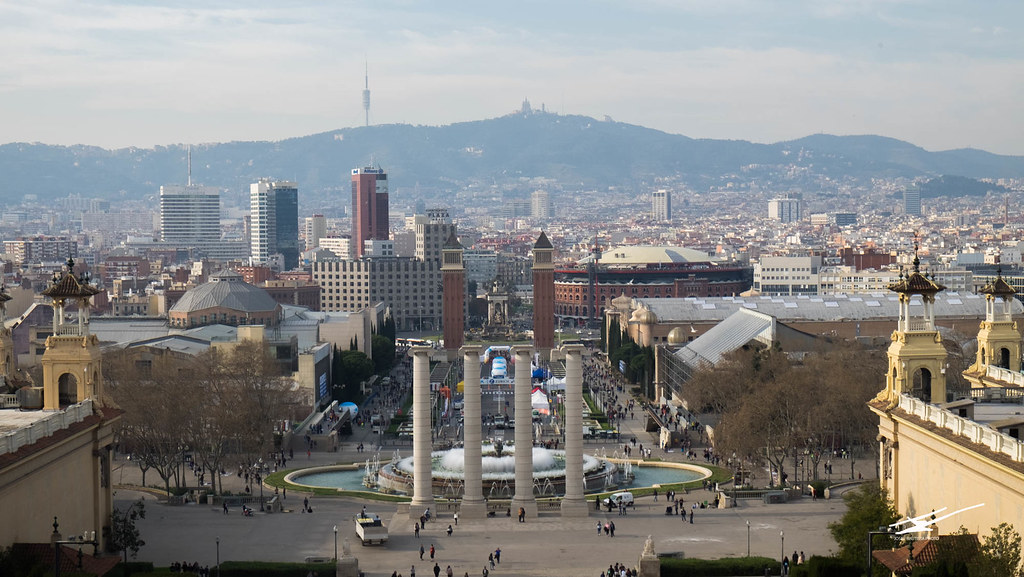 Views of Barcelona from MNAC.

Magic Fountain
After the sun goes down, the lights and music goes up in the biggest fountain of Barcelona. Designed by the engineer Carles Buigas, it was another construction for the 1929 International Expo, and restored again for the Olympic games of Barcelona 1992. Take a spot from upstairs to watch the whole show. It repeats several times for an hour and half after sunset. 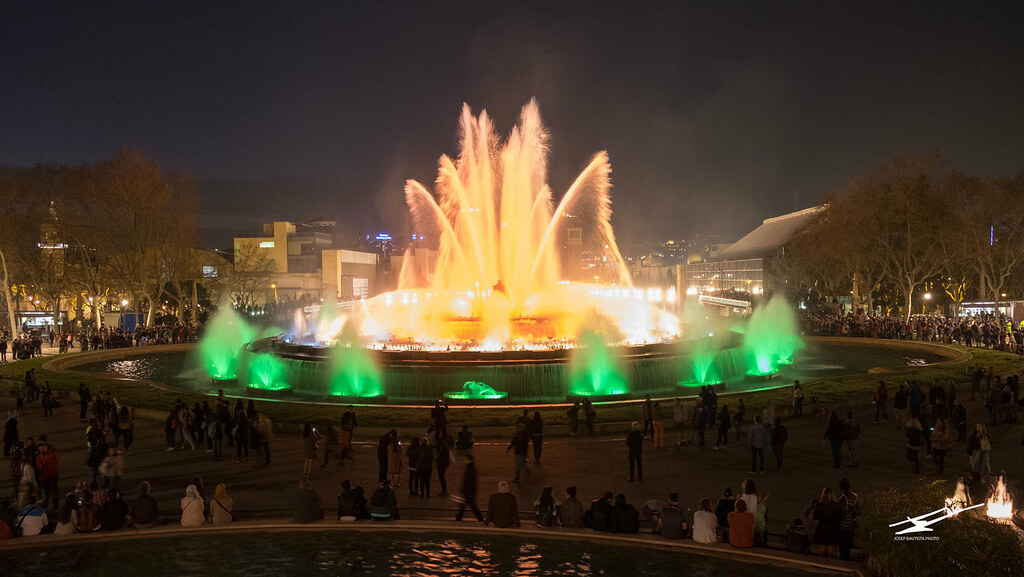 Las Arenas shopping mall
In 2011, and with the prohibition in Catalunya to practice bull fighting, the former bull fighting ring in Plaça d’Espanya was reformed as a shopping mall, for a better use of the space left. For a long day walking around Montjuïc, go up to the observatory to get the views of the whole walk you realized during the day, and feel proud about it. Recover your energies in a restaurant or burn your wallet in a shopping spree. 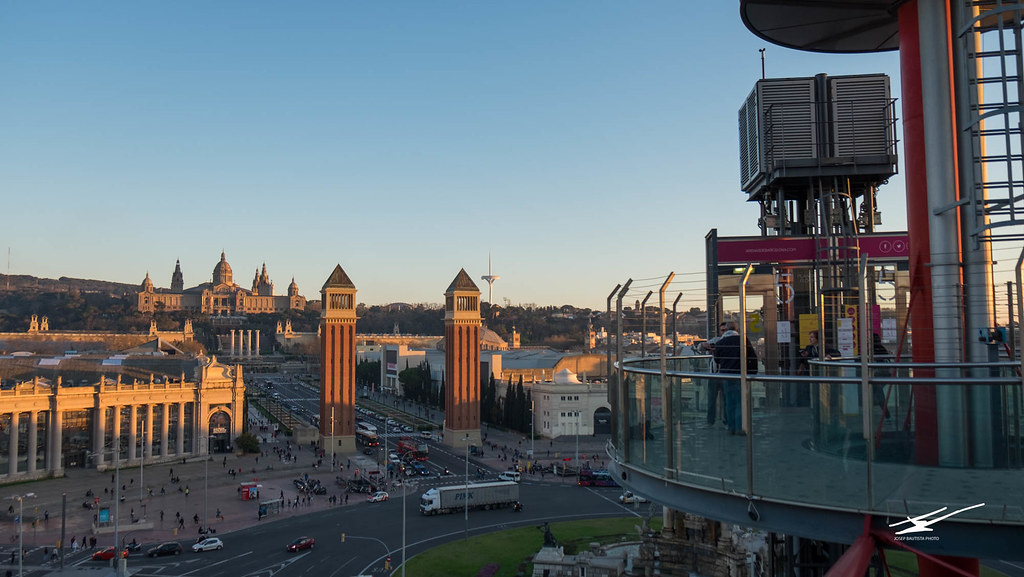