Things to do in Kabukicho

Shinjuku, my second residence has the red light district of Tokyo, and despite it’s bad reputation, Kabukicho was once my playground. Saying it that way seems that I’m the night king of the sleepless town, but that’s not what I meant. The truth is, it has a lot to offer for night entertainment, as much as many leisure options and delicious restaurant for a good price. As many as you can imagine for the red light business. Nightclubs, bars, host and hostess clubs, and streets packed with love hotels. The newest landmark of the sleepless town, the Hotel Gracery Shinjuku, has come to boost a good image and tourism to Shinjuku. Come take a walk around Kabukicho, review its landmarks and enjoy some short stories of my times around the area by reading the rest of this post. 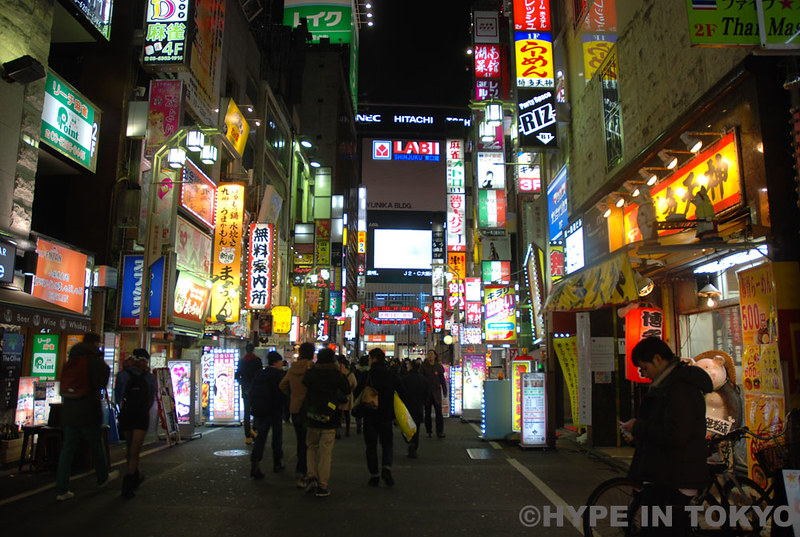 Kabukicho Red gate
The first landmark you should cross on your way from Shinjuku station to Kabukicho is the large bright red gate on the street. Easy to spot, and marks the frontier streets that divides one district from another. All along the same street are other easy to spot landmarks. Don Quixote, the “everything you need” tax free shop and its bright lights. Notice if your first time in Kabukicho at night, the light coming from the streets is enough to make a difference between districts. The newest Hotel Gracery Shinjuku can be spotted from here, as the tallest building right in the center of Kabukicho. 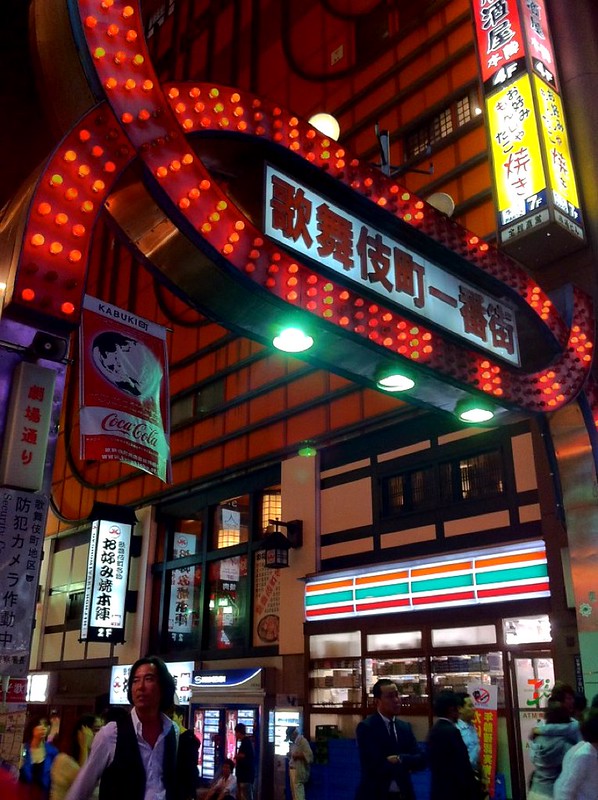 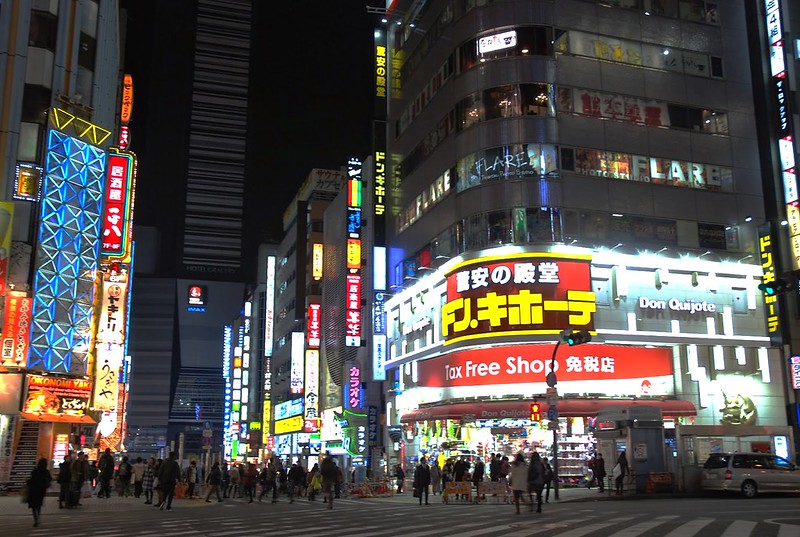 The frontier street to Kabukicho in Shinjuku.

My first time in Kabukicho
On my very first trip to Japan in 2009 with some friends, we met with some japanese friends we met in Barcelona, and asked them to go for a night out. Their choice, Kabukicho, the infamous red light district. We all heard stories and seen movies about the Yakuza ruling the place, the love hotels and the dark side of bars in the sleepless city. Far from fiction, it was all clear and safe for tourists, and the restaurant was a delight. We liked the atmosphere so much as to come back a few nights later. That time, only two of us went, and we became easy pray for client fishers. We could barely walk 10 meters without being stopped by the chants of many huge black guys all telling us the same phrases. “Hey guys, were you going?” “Come to my club”, “wanna see some boobs?” and that escalated quickly to a whole new level of perversion.
We ignored most of them, just get caught in the chants of young girls in front of a bar, that we stepped in. Just a bar to sit and drink for 40 minutes af all you can drink alcohol, from a short list of 5 choices. The catch, the rest of the menu had exorbitant prices. Without really knowing, we figured out we were in a hostess bar. We made our hearts strong and fought the charms of the mermaids telling us to drink a lot more. A fun experience that end up with a bit less money in our pockets, but made it safe back to our hotel. Through all these years I’ve been hearing stories of tourists getting dragged and when they want to come out the bar, end up paying large bills of more than a thousand Euro, or worst. Pay attention to where you decide to enter in Kabukicho. 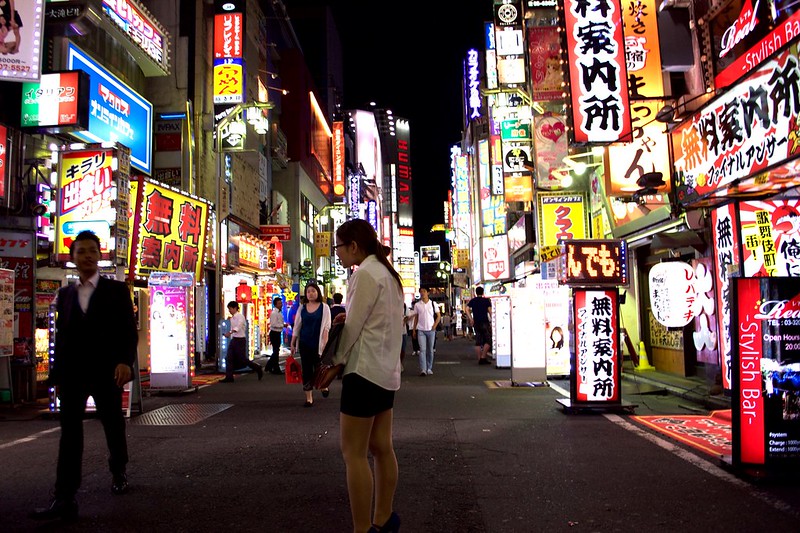 Neon streets of Kabukicho at night.

Hotel Gracery Shinjuku
The newest landmark in Kabukicho was opened in April 2015, amidst a tourism boom from the neighboring countries. Not only the hotel is the tallest building in Kabukicho, it also contains a Toho cinema theater complex and many restaurants. The special feature of the Hotel is yet another surprising only in Japan theme. Godzilla shows his head over the building and the hotel clients can visit the terrace to take a photo. Also, there’s a special Godzilla room, all themed around the giant kaiju. Godzilla has been before in other places in Tokyo, like Roppongi. 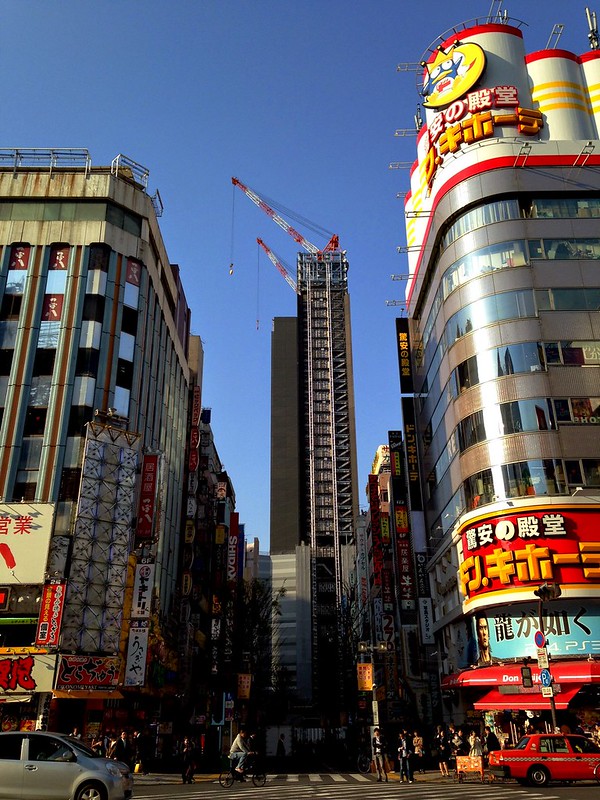 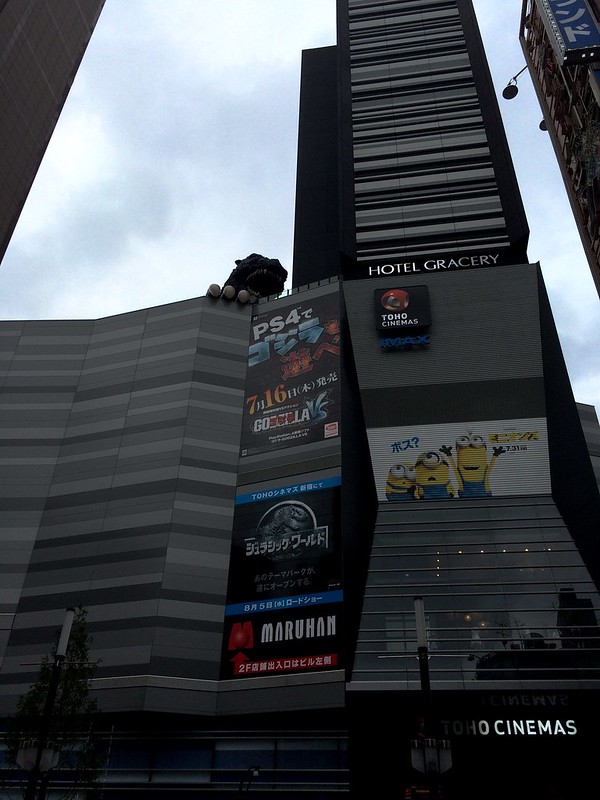 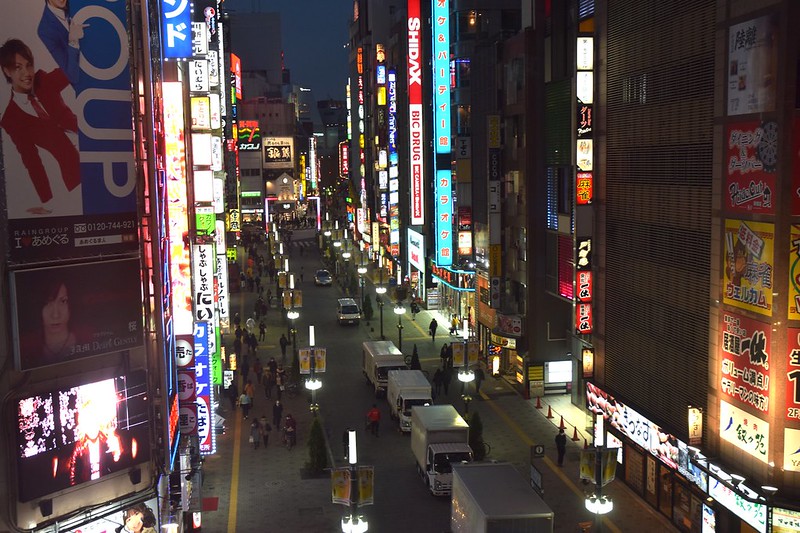 Views of Kabukicho from the Toho cinemas.

Shinjuku Golden Gai
This maze of alleys counts with more than 200 small bars. Most of this bars have a bohemian charm, just seats for 5 guests, usually commoners from the place, that they go to drink and spend their time exchanging their ideas while enjoying some drinks and snacks.
On the 1950’s decade Golden Gai first was a prostitution area, then it became ilegal and turned into what it is now, a drinking area. Some of those bars were originally more nasty than they’re now.

Only for japanese
When going to Golden Gai you’ll see some of this signs hanging on their front doors. Don’t think that this is a racist feature. Many of the bars hold the sign to avoid tourists for coming in, indeed. The reason is because they haven’t enough space and prefer to keep their common folks coming to the bar. I was lucky one client from the bar I was working in Tokyo invited me once to have a drink around Golden Gai. He took me to his preferred bar, and the ambience was completely friendly even though they had the “only for japanese” sign on the door. That might make me be japanese now. 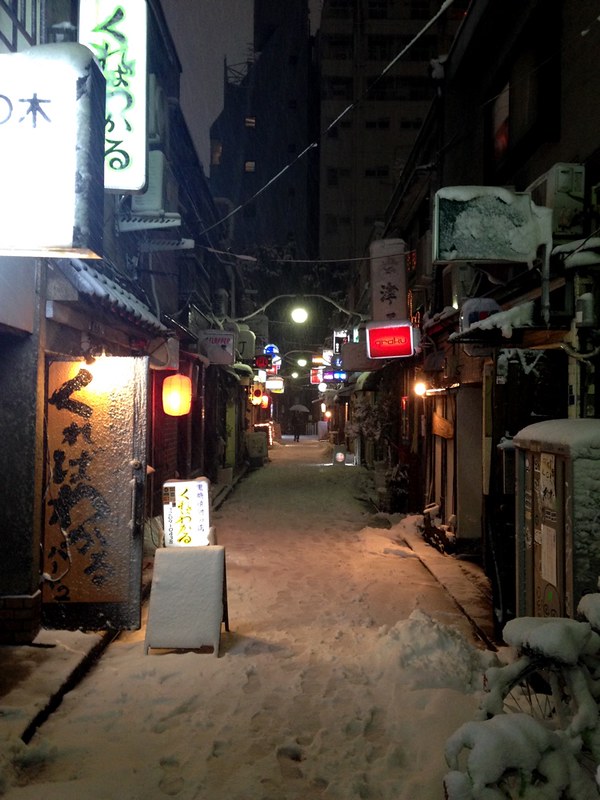 Shinjuku Golden Gai during the snow of 2014. 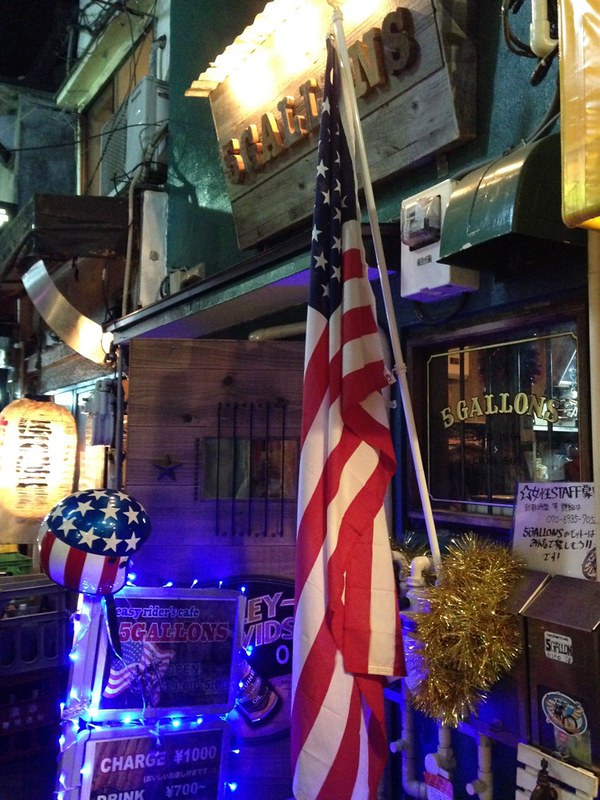 Robot Restaurant
Already becoming one of the main must do things in Tokyo, the Robot Restaurant is the king of shows and hype in Kabukicho. Already seen the show twice for the last two years, and the show varies from time to time, boosting their customers to come again. The first time, the hype was up to its name as promised. Light show, robots, dinosaurs, girls, and so on went through the 90 minute show on a parade of madness. 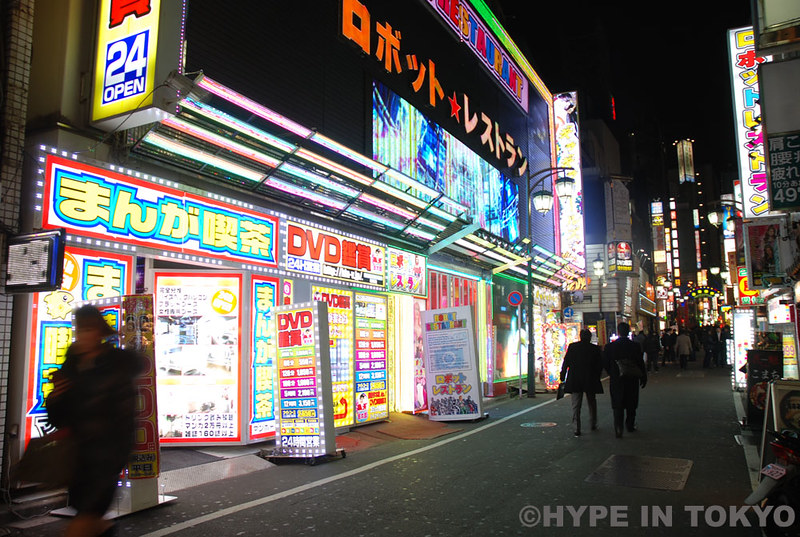 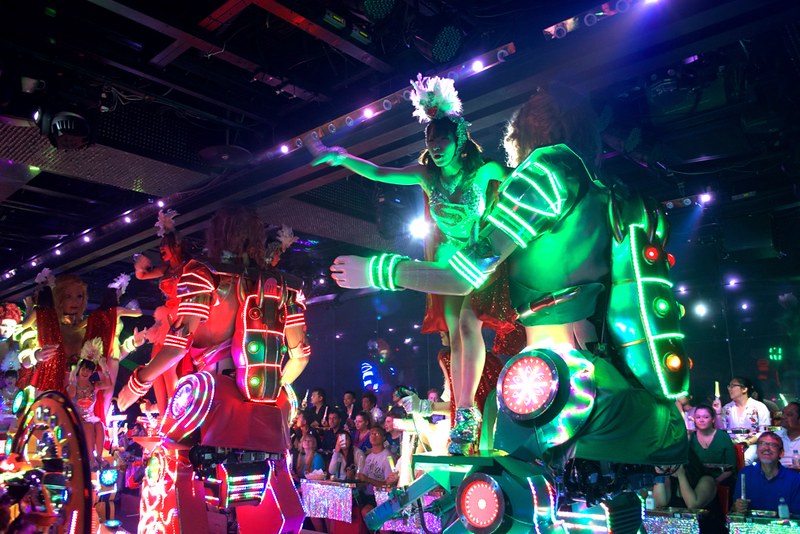 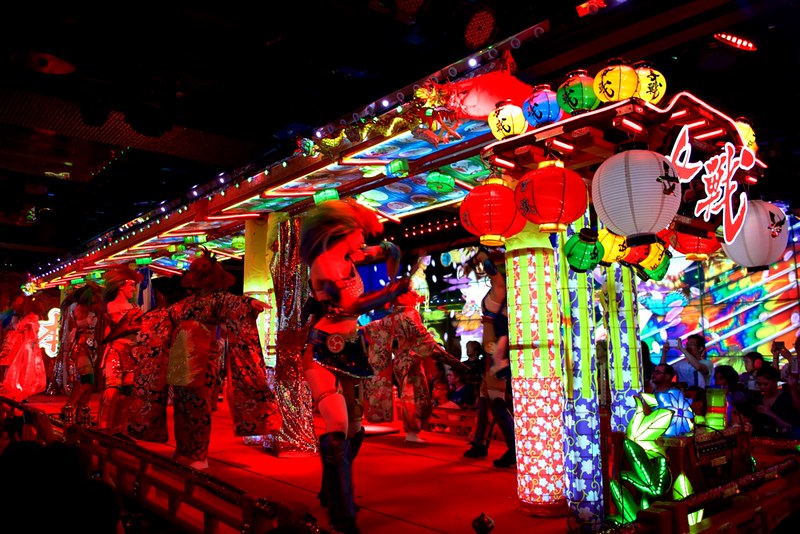 Hanazono shrine
On the eastern side of Kabukicho lies this shinto shrine. Built during the Edo period by the Hanazono family and dedicated to Inari, god of fertility and success. Another small shrine altar is inside the shrine area, at the end alf a hall of gates. 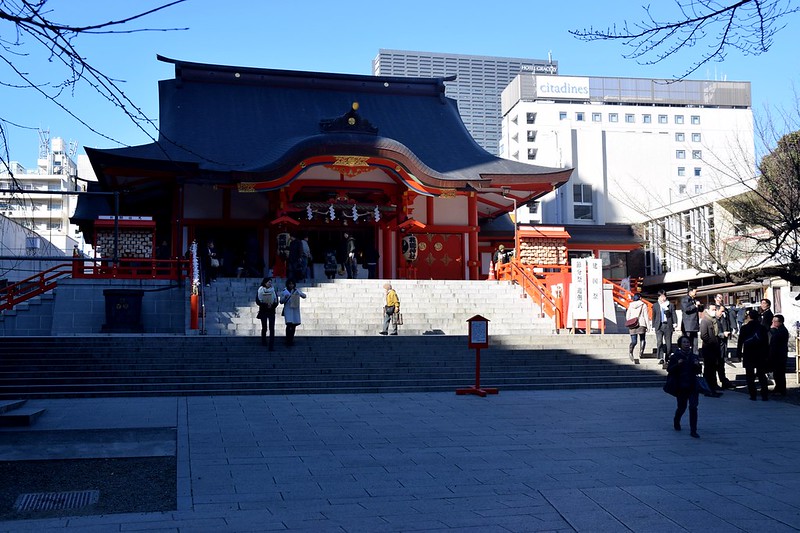 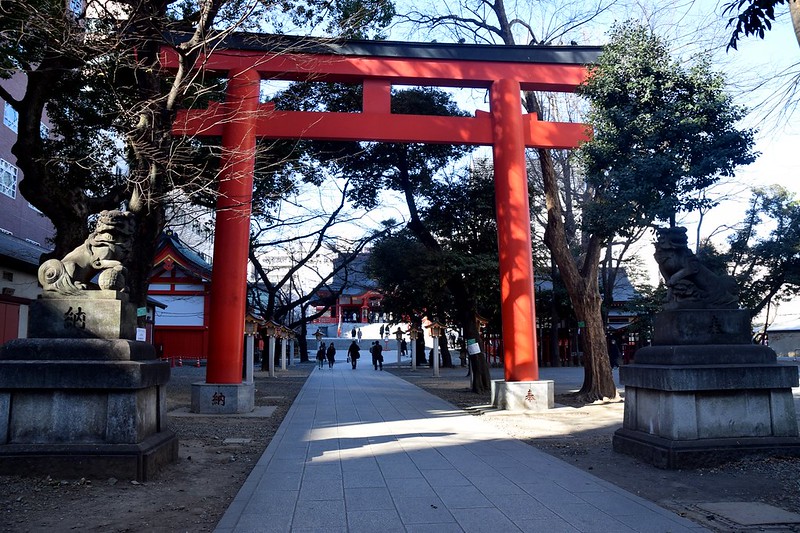 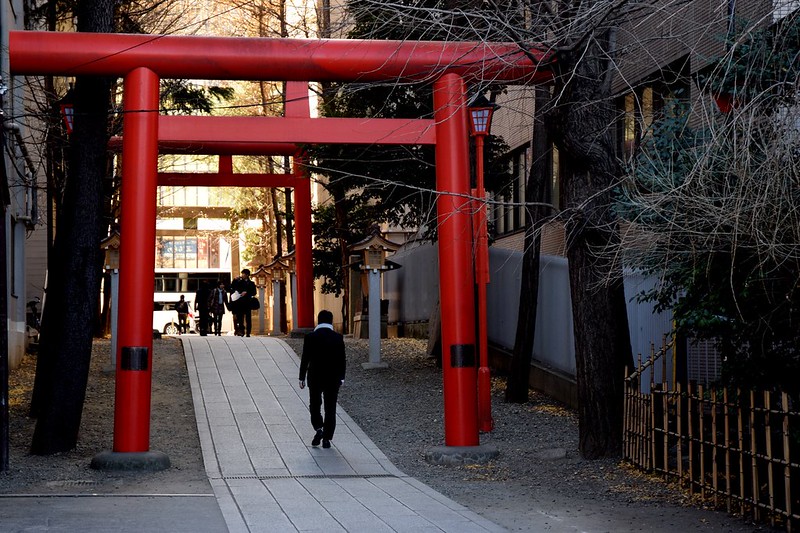 Side gate and passage to Hanazono shrine in Kabukicho, Shinjuku. 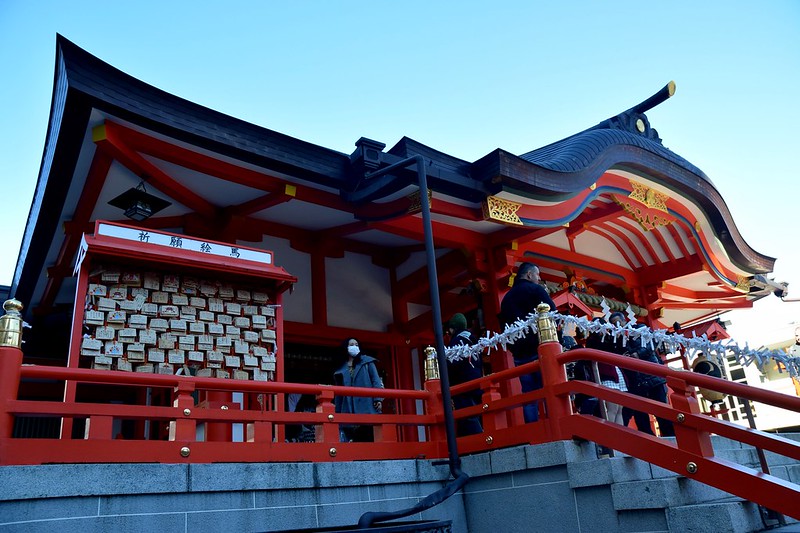 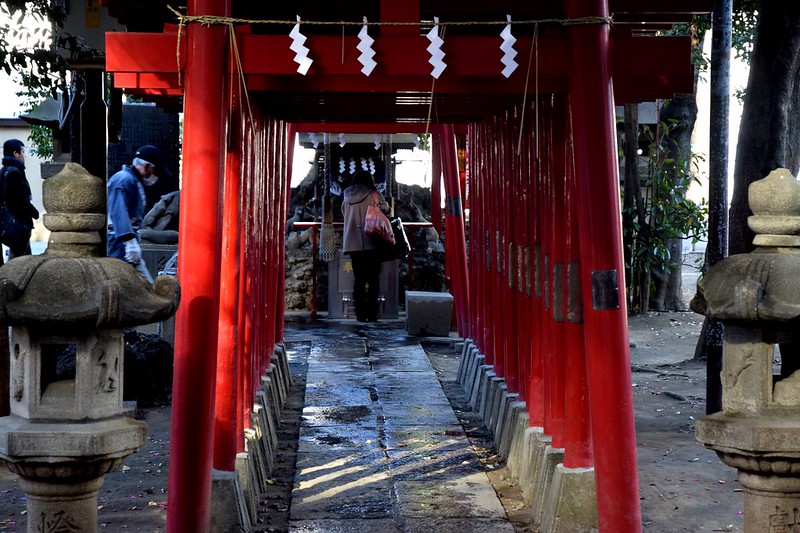 Woman praying at the small altar in Hanazono shrine, Kabukicho. 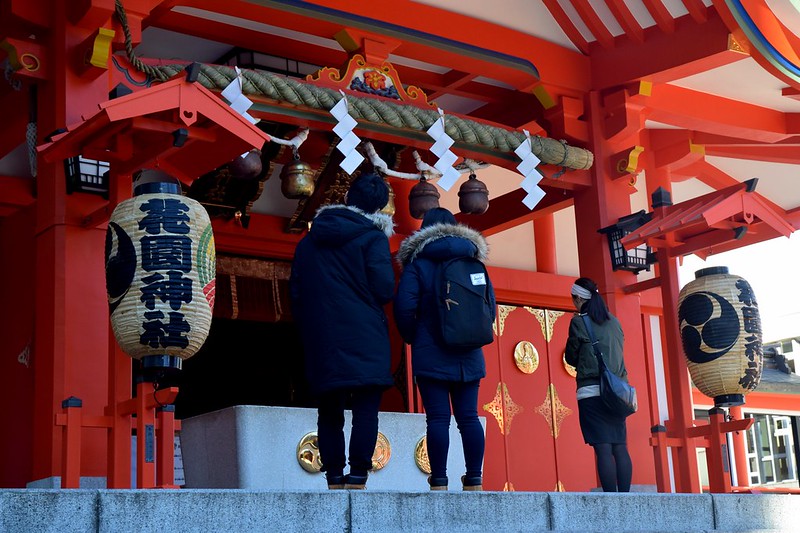 A night out in Kabukicho
Packed with restaurants, bars, izakaya, and karaoke. The perfect combination for a night out. There are several restaurants I could recommend, but if I had to choose one, that’d be Mo Mo Paradise. It became a yearly tradition for our share house members to dinner in this all you can eat restaurant. Shabu shabu and Sukiyaki hot pot are their specialities. You’ll find the restaurant on the 8th floor in the Humax building. After finishing with the meat you can head up to any izakaya in the area with your group. Most of them have at least one english menu. Missed the last train? then only one thing left to do, go and sing to your heart content in a Karaoke. 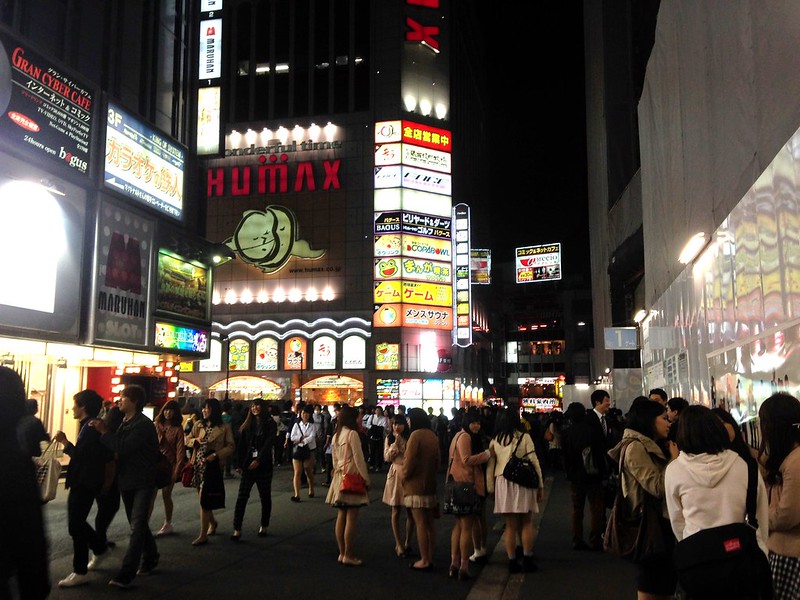 Youngsters gather for a night out in Kabukicho. 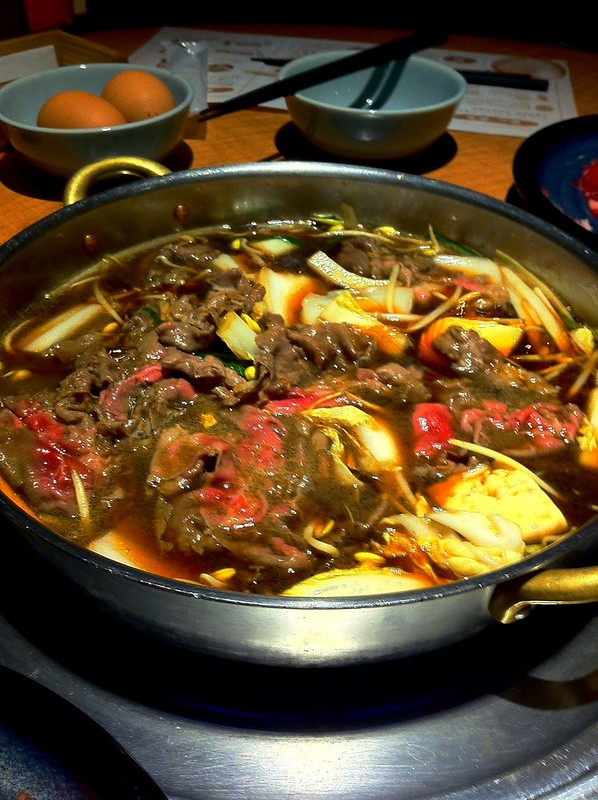 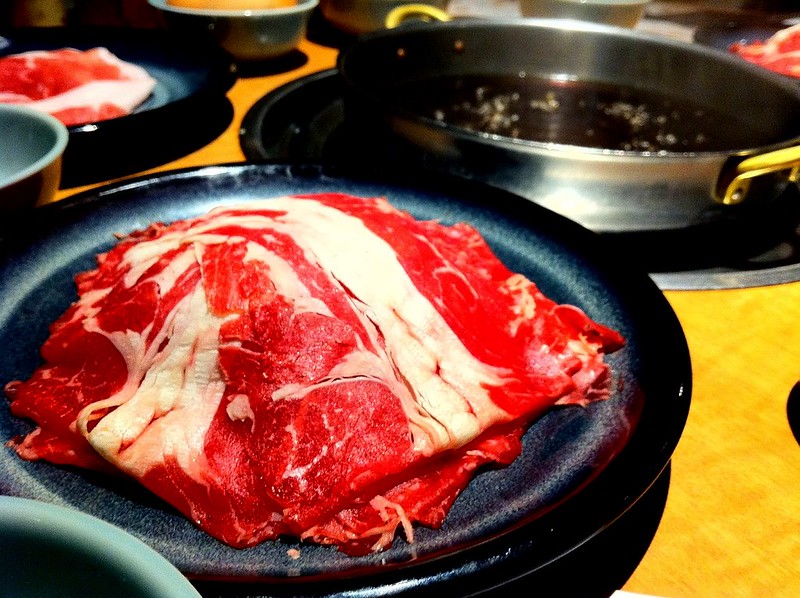 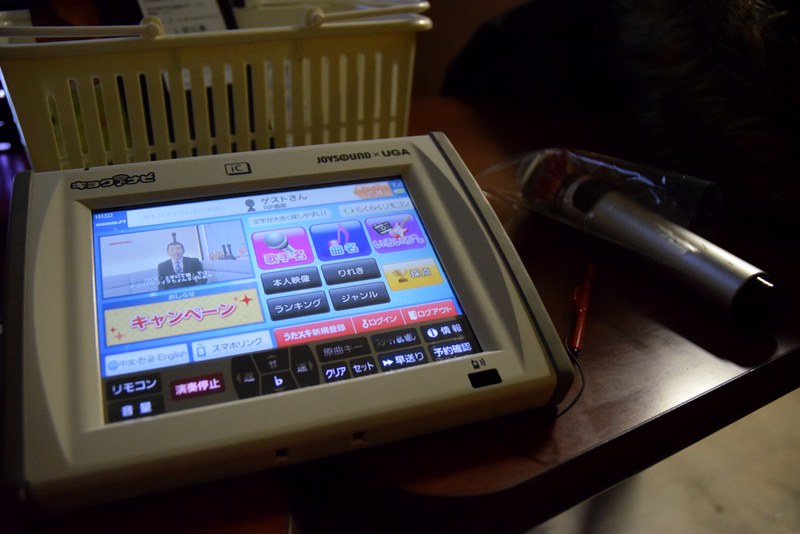 Remote control from a Karaoke in Japan.

Kabukicho by day
In the case to have stayed out all night in Kabukicho, the early morning hours are completely different in the area. Drunkards wandering around, garbage everywhere waiting to be picked by the cleaning staff, and the shops getting ready to open their daily business. 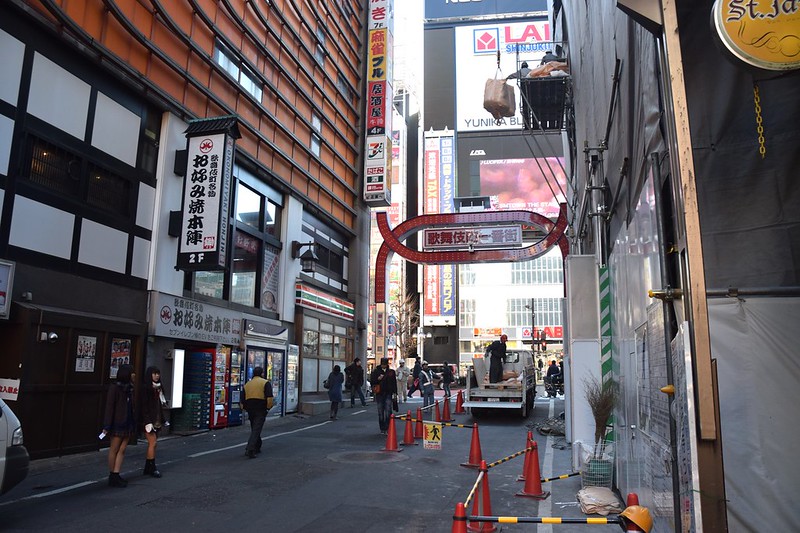 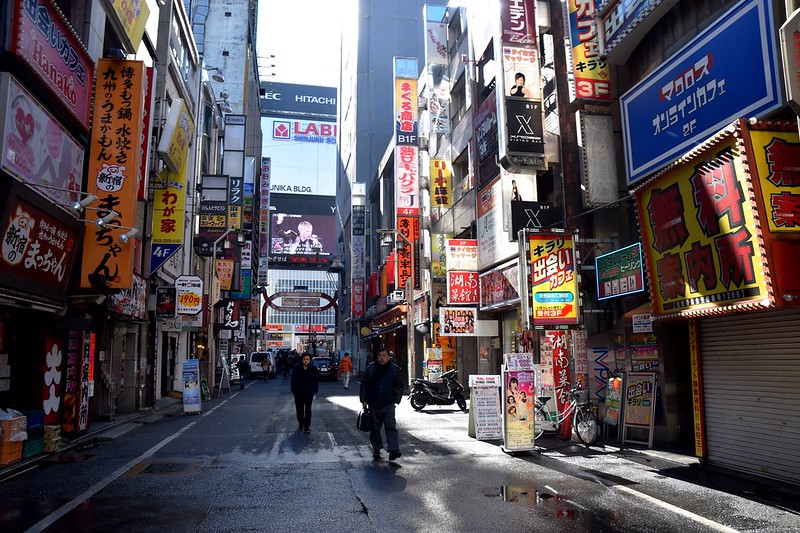 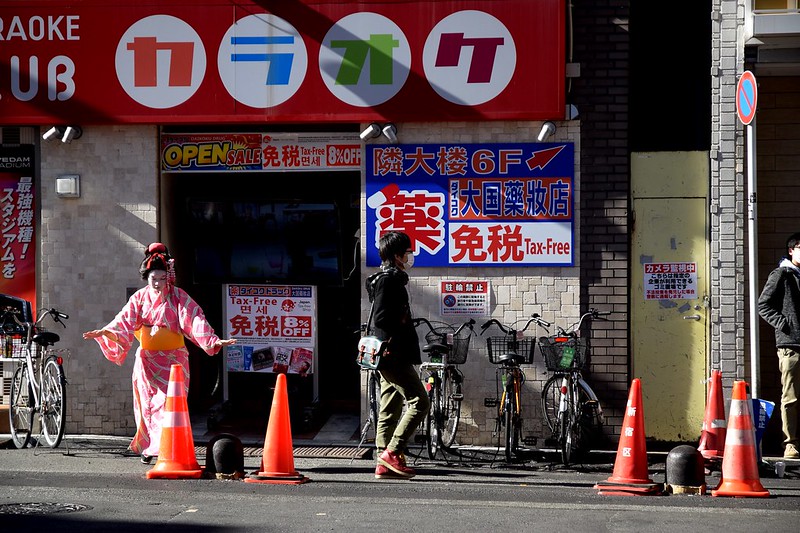 Lady in a traditional japanese fashion performing to attract clients in Kabukicho.