It’s becoming a tradition to spend some winter time in Tokyo for the last years, and the plans just got better every year. From the check in at the hotel on the last day of the year, to the first night of the new one. Here’s a follow up of how I celebrated New Year in Tokyo, and other plans to spend an awesome New Year in Japan capital city. Anything you miss on the list? Feel free to leave a comment with any recommendation, or plans you made on last New Year in the section below. 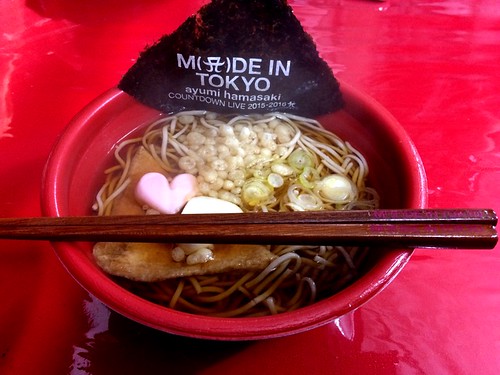 Accommodation
This will depend on how much you’re willing to pay for a room in a hotel in Tokyo, the last night of the year. First problem, even looking for a month in advance, the prices won’t get down from 10 000¥. But think about what are your plans for the last night of the year. You’ll probably get dragged into a party and won’t make it to the bed until the sun rises. Other options? The capsule hotels might be the answer. Cheaper than normal hotels, a lot of them with nice facilities and baths. you’re only going to crash a few hours the morning after anyways. Also, this way you’ll have a place to leave your luggage in a locker. Or if you’re improvising a party you can end up sleeping in a karaoke booth while your friends next to you sing to their hearts content. Accommodation solved, let’s get the night started. 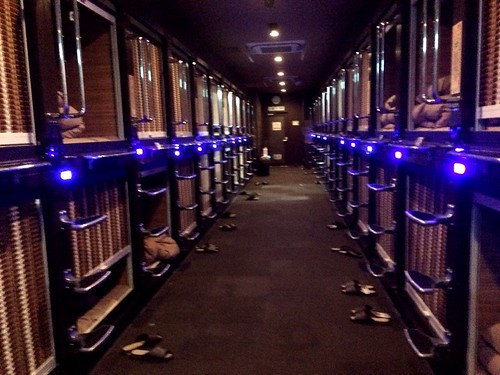 Last dinner of the year
After all our party members had taken a rest in our respective capsules, we met for dinner in Shinjuku. We made a reservation in advance at Tsukada Noujou, for many good reasons. An original izakaya (japanese style pub) with many branches in Tokyo. The service is astonishing and the staff wears traditional yukata, the lively atmosphere gets you in the good vibes from the start, and the food that comes from their own farms all through Japan, simply delicious. Need more reasons, a good friend of mine works in one of the restaurants. 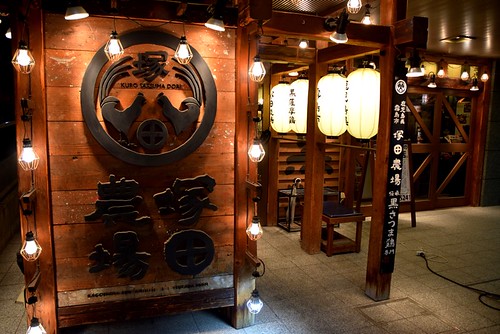 Once we entered, we had a really warm and lively welcoming in their restaurant style. Everybody knew we were coming and had prepared some surprises for us. We made contact with our table neighbours and were chatting and joking with them most of the time, all in a super friendly and joyful evening. 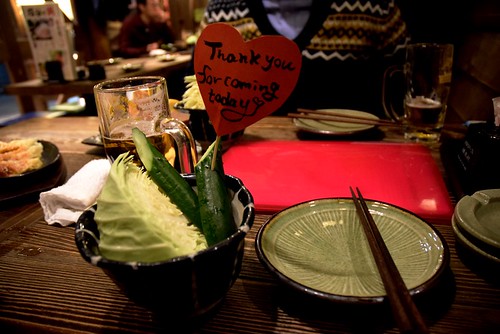 Details in the service, “omotenashi” at Tsukada Noujou.

After a few drinks our table neighbours were already past gone their booze limits. On our side, we tried many of the food options, as everything looked delightful. Thumbs up for the Chicken nanban and the basashi, raw horse. After two hours we ordered a cup of the finest sake for last and waited the last surprise. 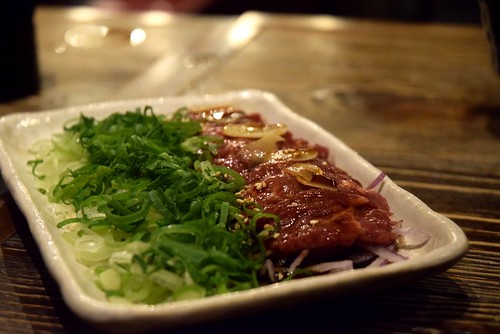 It was time for our next stop of the night, and here our party got separated. My friends headed to the Tokyo Tower to see the New Year countdown from there, and I took the train to Harajuku, where I met my girlfriend for the countdown. 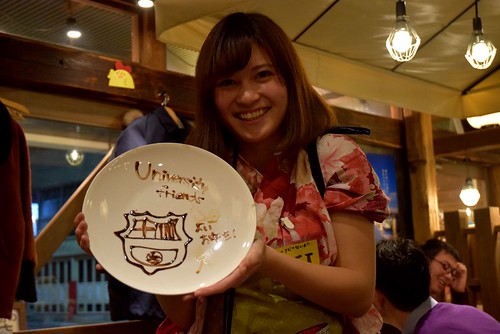 She even draw for us the F.C. Barcelona shield on a plate! “University friends” by Mei, at Tsukada Noujou.

Hamasaki Ayumi Countdown live concert
For those who don’t know her, Ayu, as her fans call her, is considered the queen of Japanese pop in all history. The Countdown live has been held for 16 years at Yoyogi National Gymnasium, next to Harajuku and Meiji Jingu shrine. This year’s theme was Made in Tokyo, a really catchy and commercial name. We got inside the concert venue, slurped a bowl of Made in Tokyo soba noodles each and headed to our seats. It was my first time attending a Hamasaki Ayumi concert, and I have to say, it was astonishing. From the performance, to the audience synched coreography to the music. Never had an experience like this in a concert or festival before. 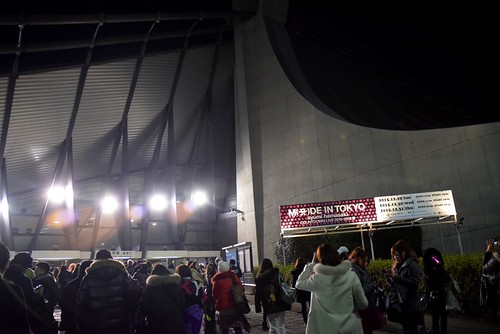 Here’s a video with the highlights of the countdown. 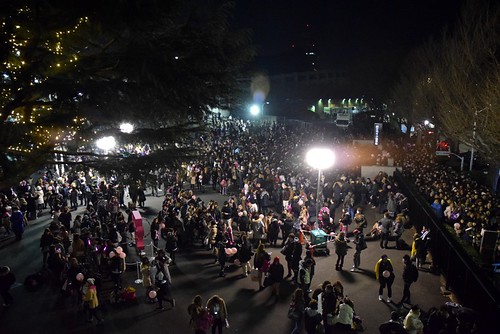 Ayu fans after the Made in Tokyo countdown live concert.

Happy New Year!
When the Ayu concert finished, it was time to check and regroup the party, but that was impossible. The line to get outside the Yoyogi National Gymnasium got mixed with the line of people going to Meiji Jingu for the “Hatsumode” first shinto shrine visit of the year. We decided beforehand to leave the Shinto visit for the morning after, but still, it was hard to leave the place. My friends went clubbing in Shibuya, wich was a good plan if we made it on time. Instead, we went back to Shinjuku, to spend the last hours of the night in a Karaoke, were we fell asleep until check out, whilst everybody around was singing to their hearts content even after 9AM. 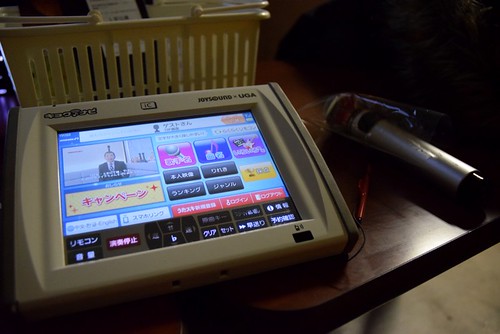 Remote control from the Karaoke booth.

Hatsumode
The first Shinto shrine visit of the year, named Hatsumode, a must do if you’re in any location of Japan. The good path to start the year is asking to the japanese gods to help you fulfil your new year resolution. Like zombies, we headed to Meiji Jingu, protected by a warm and sunny day, to realise that mostly everyone around us was in a zombie mood as well. We were right in front of the police offer that controls the flow of people going into the shrine, and with appeared to me his best Gandalf impression, said “You shall not pass”. After a long time waiting, probably more than an hour to walk 100 meters we could talk with the Shinto gods. Then took our “omikuji” a fortune paper to know what is to expect for the whole year. My result? is only between the gods, my girlfriend, and I. Sorry I can’t let you know. We bought our protection charms at the shrine, had a cup of amazake, sweet and warm rice drink, and headed to check in at our hotel for the next days. 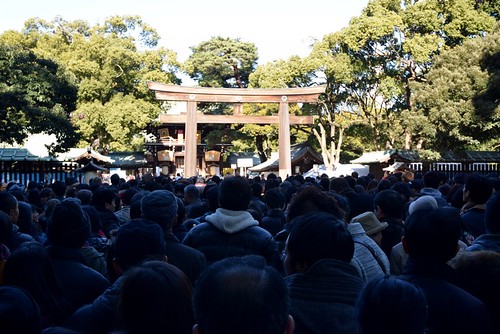 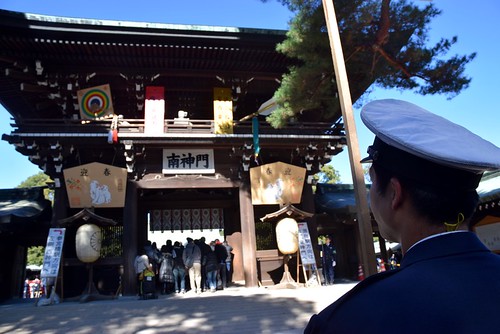 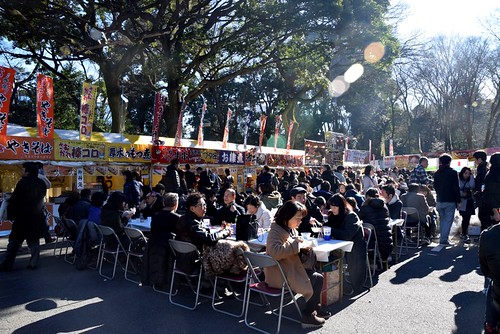 Take a break for the long wait at the nearest food stand venue, Meiji jingu.

Time to relax
We checked in at one of the APA hotels in Tokyo, a hotel company that I’ve been staying for the last few times, and always been glad for their services. Our plan was to leave our stuff in the hotel, and headed to Odaiba to spend there the rest of the first day of the year. The reason, Oedo Onsen Monogatari. The onsen leisure center in Odaiba was perfect to shake off all the exhaustion we piled up from the last hours. Dipping into the hot springs was the activity we were most wishing to do that day. That, and also we booked a massage, and thought about sleeping a bit, relaxed during the massage. My first massage since more than ten years ago. A really painful one for me. Seems that my body really needed to be cracked, and all muscles to be put in their right point. At some stage during the massage I think I passed out, because the 40 minute we booked were gone in an instant. 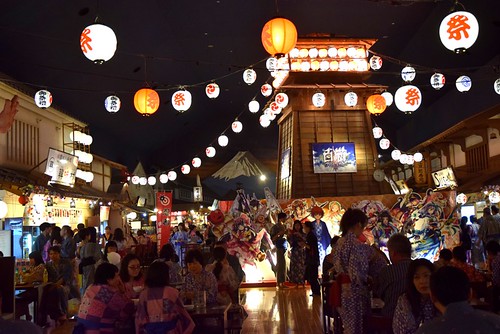 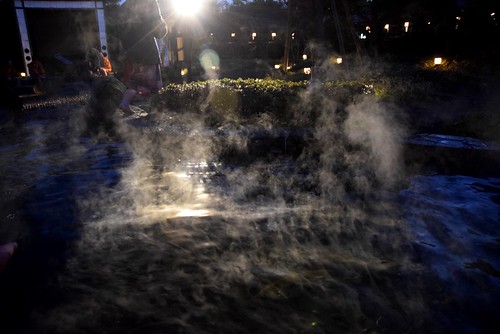 Amongst the activities you can do in Oedo Onsen Monogatari, the star is the hot springs facilities, but not the only one. Once you get dressed into your yukata and cross the dressing room, you’re traslated to an Edo themed park. Restaurants, gift shops, games for kids and adults and tatami hall areas to chat and relax. The exterior stone walk is a must do, even in winter. Don’t worry about catching a cold, they give you warm clothing to be in the exterior, and the water is hot enough to fill up your spirit. 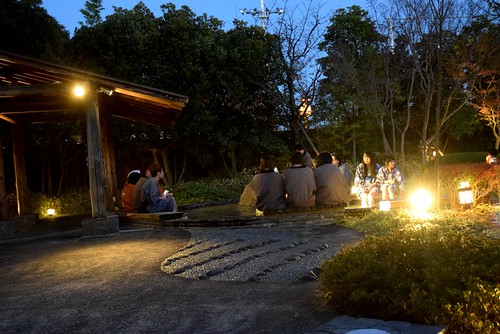 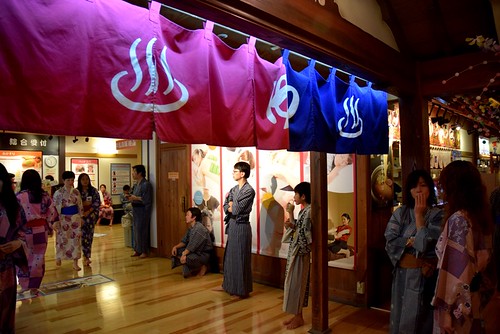 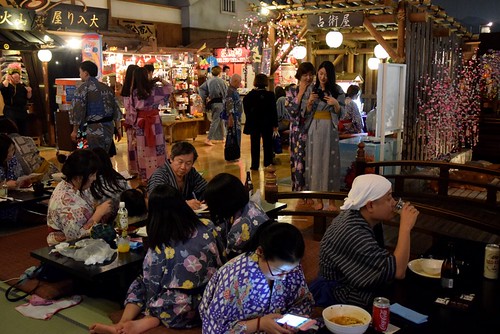 Everybody gets to wear yukata, choosing from different patterns, Oedo Onen Monogatari. 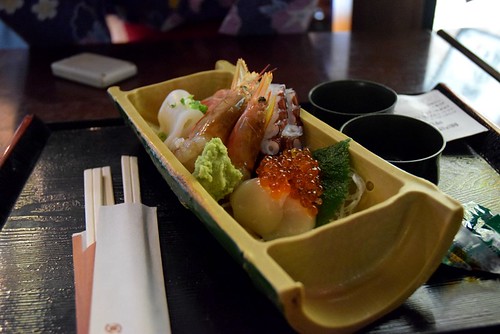 Our day was coming to an end, and once we filled our stomach, it was time to leave the Oedo Onsen Monogatari, go back to the modern, never resting metropoli of Tokyo, and get the final rest at the hotel for the first night of the year. 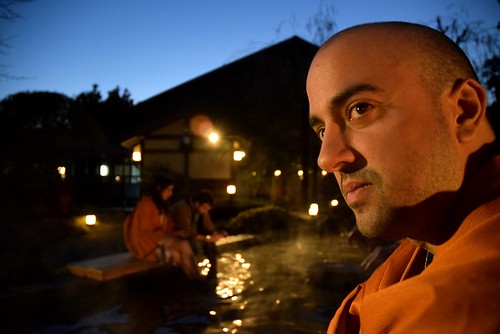 Leave all your worries out and relax at Oedo Onsen Monogatari, Tokyo.