Take a thin slice of meat using chopsticks. Dip it into boiling broth inside a hot pot. Stir slowly side to side the chopsticks holding the meat. Hear the voice. How does it sound like? For Japanese that sound is “shabu shabu”. One of the best meals to gather friends around the table. 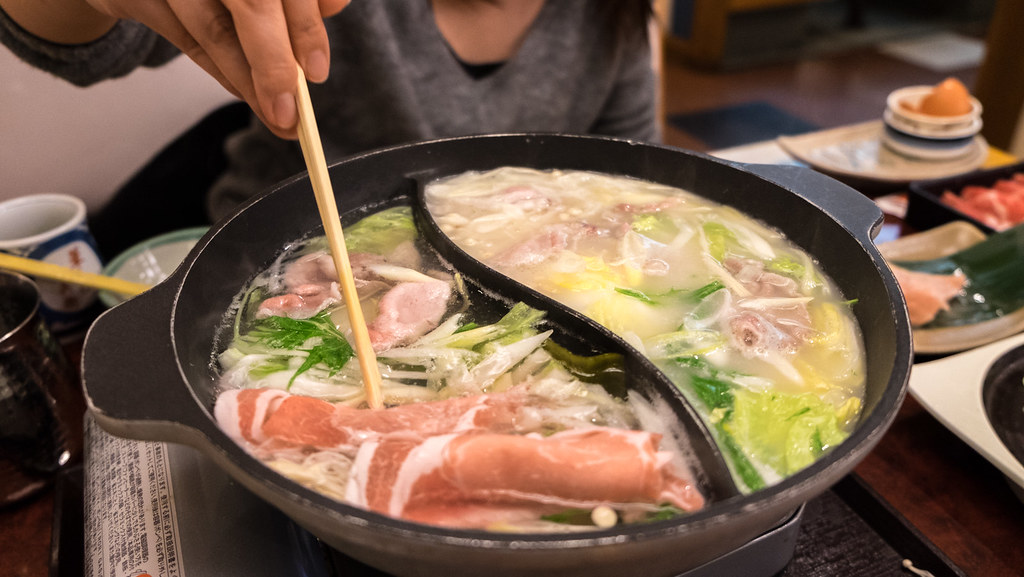 She takes care of food, I take care of photos. Good team.

A bit of history
Shabu Shabu is not an ancient and traditional Japanese meal, but rather contemporary. Created in the 1950’s in Osaka, the shabu shabu got the concept influnece from the original Chinese version. The first Shabu shabu restaurant was Suehiro, and the owner created the name for the new Japanese meal. The popularity of this nabemono “hot pot” meal extended to other cities in Japan, and usually located in tourist spots and entertainment districts. Many of the restaurants have the All-you-can-eat option for limited time, so better come ready to fill your stomachs with the maximum effort. It is also a common meal for celebrations and special occasions at home, throwing a shabu shabu party with friends or family. Even in the supermarkets you can find “shabu shabu packs” with all the ingredients. 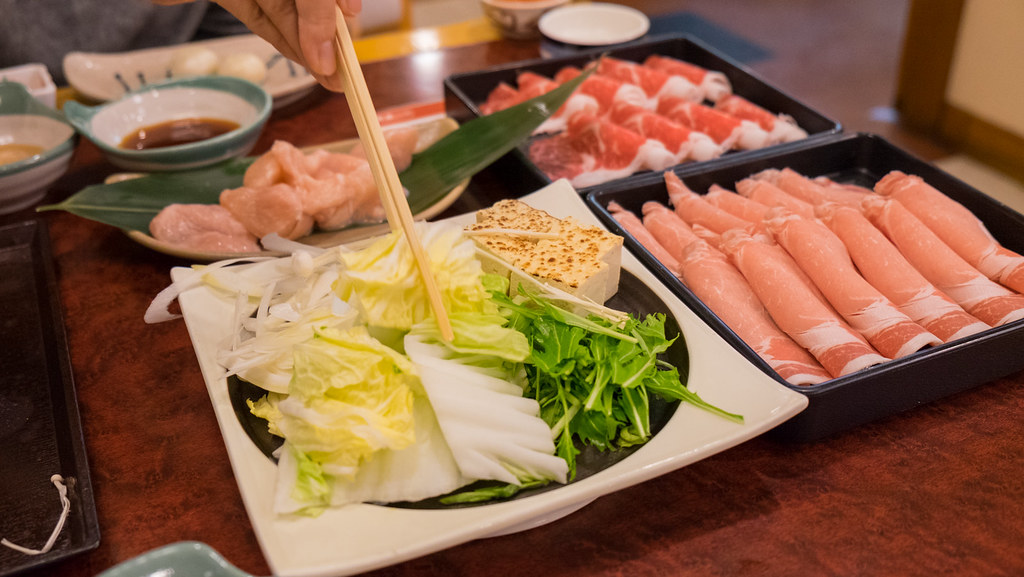 About the ingredients
I tried many different ingredients and every place has its own special ingredient or soup to add to the hot pot. The basic ingredients that any shabu shabu meal has are dashi soup, which makes the base of the hot pot. Slices of beef or pork meat, and then the vegetables. Chinese cabbage, shiitake, lettuce, green onions, and tofu. There are some other variations of soup to add, like the ones on the photos. One side normal dashi soup, and the other, collagen soup. –Good for your skin– is what my girlfriend said to make the decision. The rest of the ingredients vary from place to place. Chicken meat, carrots, enoki, noodles, gyoza and the dip sauces. All accompanied by a bowl of rice. 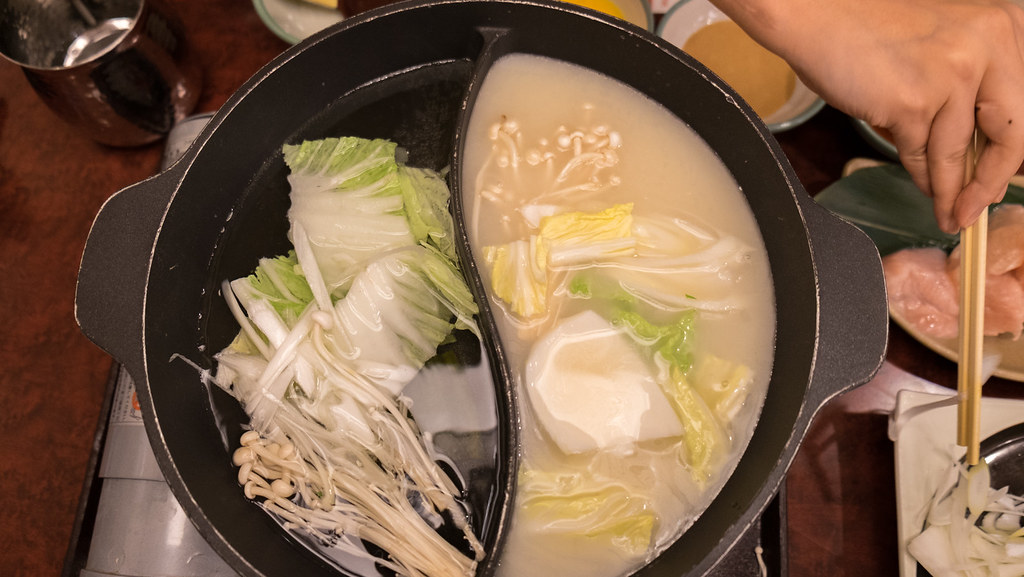 Let’s eat
Following my girlfriend guidance. Once decided to enter the restaurant and order a shabu shabu set course of all-you-can-eat for 120 minutes. Selected the broth base and first order of beef, pork, chicken and vegetables. Just for starters, four plates of food was enough, but we knew it was going to be a lot more coming. In the meantime, the waitress brought the small gas kitchen, the dipping sauces and small plates for every sauce. Most of the restaurants, bring a small gas kitchen to heat the hot pot, and some other have the kitchen installed on the table. You can control the intensity of the fire. The sauces can also vary, in our case, we had ponzu, goma (the recommended for shabu shabu), soy sauce, and a raw egg. Once the hot pot was boiling and the food arrived, she started adding the vegetables first, and then, some of the the meat. Now the good part. The vegetables stayed in the hot pot for a longer time than the meat. To cook the meat, stir a slice of meat, and on the same go, using the chopsticks, grab any vegetable. Dip in one of the sauces, and bite. To try the different combinations of sauces, meat and vegetables on the hot pot was the best of the meal. Every bite is different from the next, until you’re satisfied or the time is over. At the end of the meal, the waitress came and asked if we wanted shime “finish” to add to the leftover broth and eat as the finisher. This can bea rice or noodles, but we where beyond full stomach to eat more. 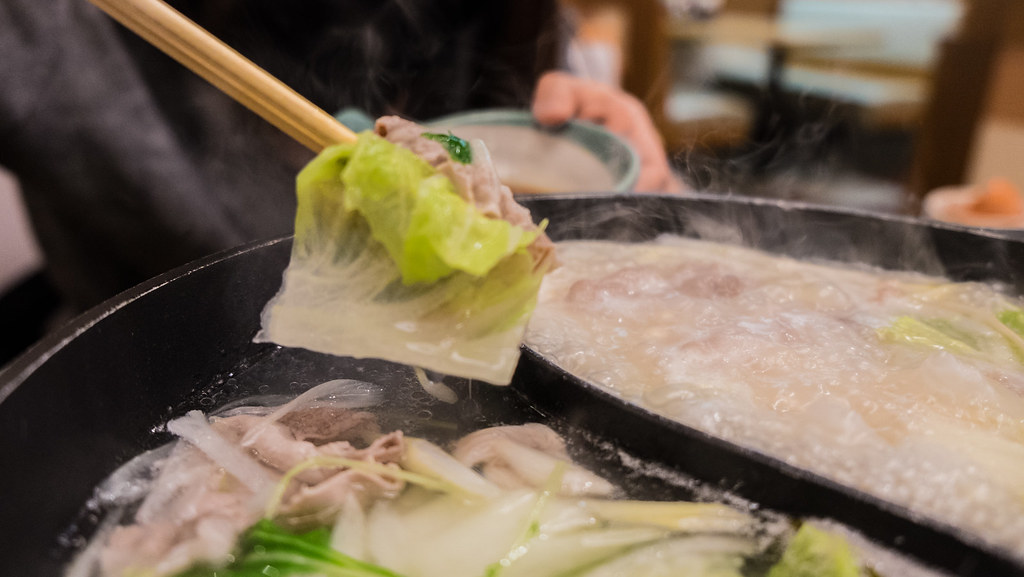 What about Sukiyaki?
Sukiyaki is quite similar meal to Shabu Shabu, with slightly differences. The broth used in Sukiyaki is a mix of soy sauce, mirin, sake, and sugar, which makes the meal a lot more heavier and sweet. The ingredients and meat are left in the hot pot until completely cooked, absorbing the broth flavour. The most common to dip after, is a beaten raw egg. You can find restaurants serving sukiyaki and shabu shabu, as the ingredients are mostly similar, but shabu shabu is more savory and lighter than sukiyaki. The later is also a more winter popular dish, and shabu shabu is an all season meal. 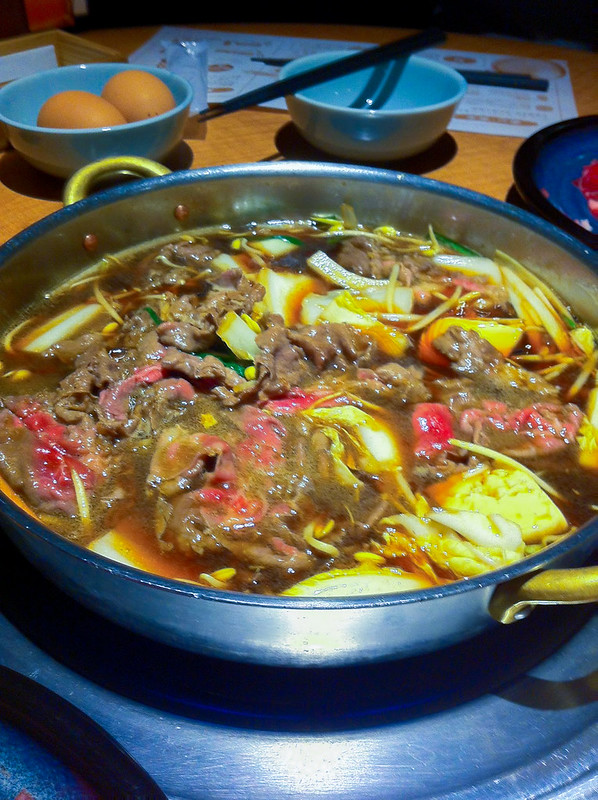