A day before the TBMTenerife started officially, I was already on the island ready for adventure. The first activity I participated was the visit to the Cueva del Viento “Wind’s cave”. With that name and a quick net research I was thrilled to go deep into a cave experience. An hour drive from Santa Cruz de Tenerife, where I was staying, I had to rent a car the day before and wake up early to drive there before 9:30AM to the visit. 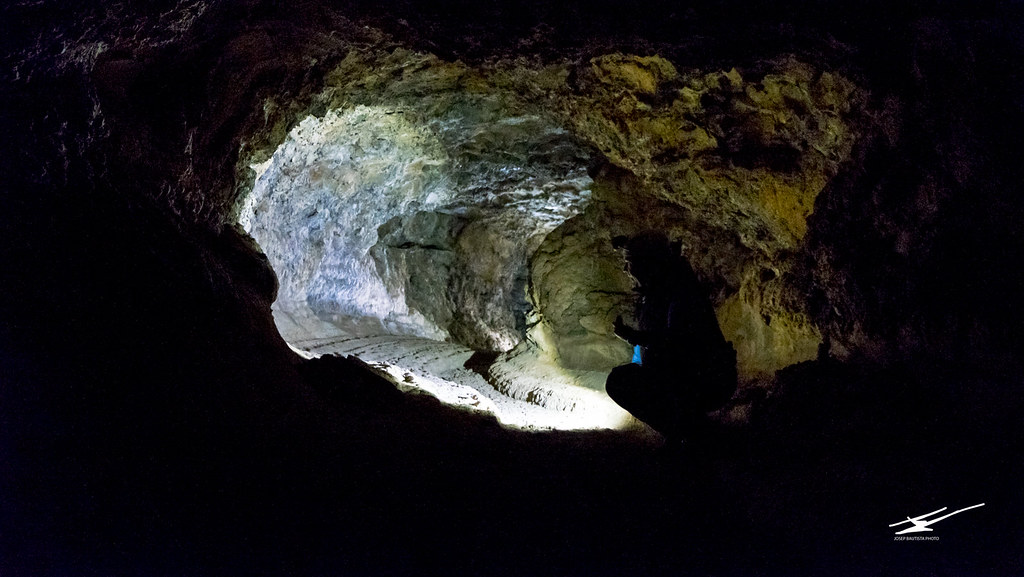 Cueva del Viento
Located in Icod de los vinos, on the North-Eastern part of the Tenerife Island. Cueva del Viento “Wind’s Cave” is the World 5th largest lava tube, with 18Km mapped up to nowadays. The geomorphy of the cave is really complex, formed during the first eruptive phase of Pico Viejo, a volcano next to the largest volcano of the island, the Teide. 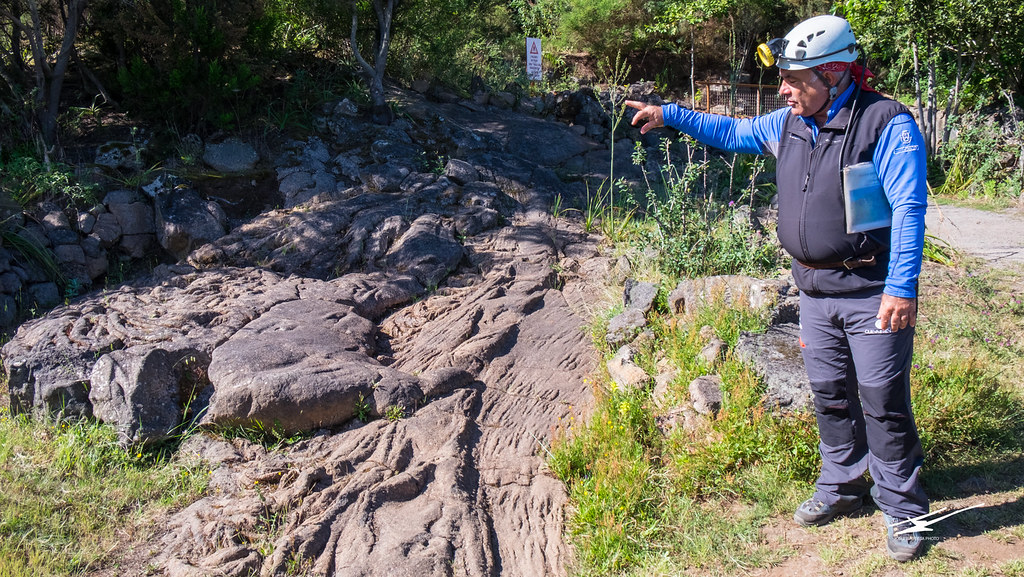 Our guide for the visit, Alfredo, showing us the features of petrified lava. 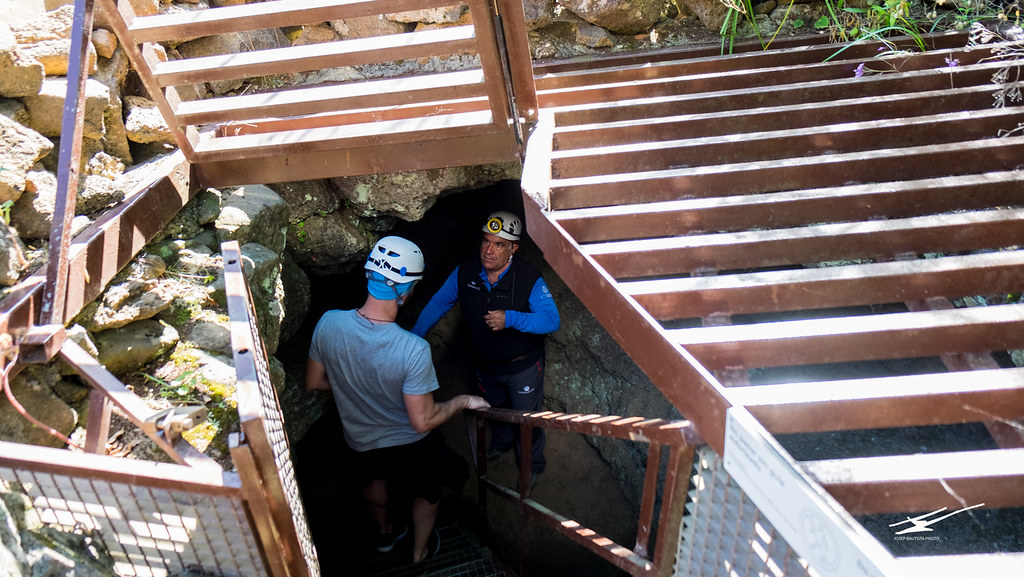 One of the entrance to Cueva del Viento.

At the visitors center
I arrived just in time, and in a bit of a hurry I dropped off all my gear in the car, as I was told I couldn’t enter any backpack or extra weight. Just my camera, long trousers, and a light jacket to enter the cave. The visit was astonishing, and the guides were even greater. Mister Alfredo Lainez, Leader guide and interpreter of Cueva del Viento, has spent over 40 years dedicated to the caves and knows every single rock and detail of the caves and its nature. The best to know and get the passion he feels about it, able to pass it to the visitors. We learned about the history, the geomorphy of the area with lot of details. Lot of facts were compared to Hawaii volcanic areas as well, some of the features of the two volcanic areas are unique in the whole World. After the historical briefing, we were given a helmet to enter the cave, and ready to board the van to transfer to one of the cave’s entrances. You can check all details of the visit and more information on their official site. 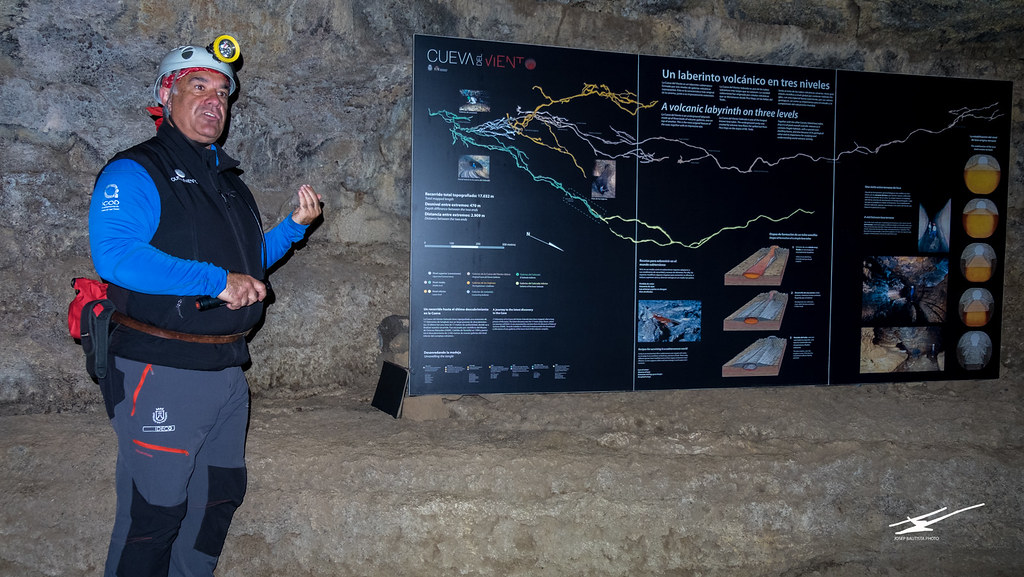 There are few panels inside the lava tube to learn about the geomorphy of the Cueva del Viento. 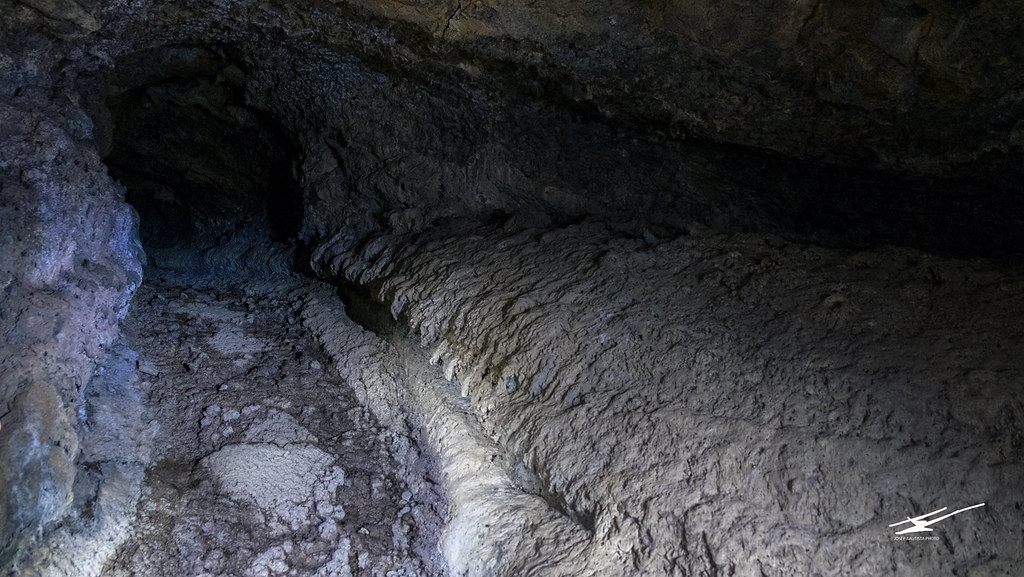 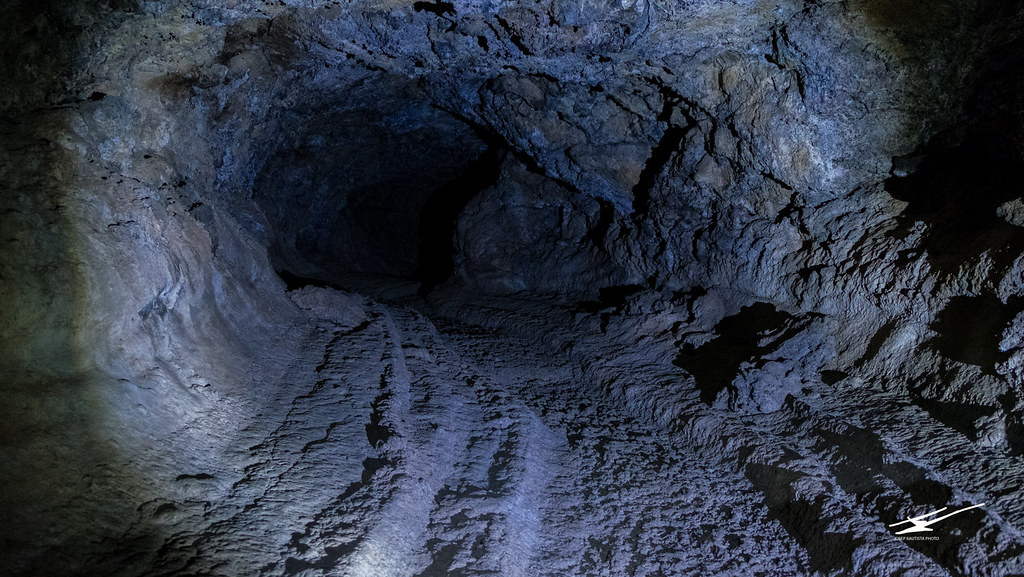 Into the lava tube
As I mentioned, the Cueva del Viento is a cave complex crafted by the lava from thousands of years of history, shaping and reshaping the area, the tunnels, the exits and entrances. The 5th longest lava tube of the World. And it remains unaltered on its 98%. This means that the visit to the lava tube, and the maintenance of it, it remains natural on almost completely. Compared to other visitable caves and excursions this a mentionable feature. Only for security reasons, the visitable area has few screws and iron supports to avoid any accidents. A few support points of support and metallic aerial steps to avoid stepping on the natural ground. Imagine the thousands of visitors stepping on the grounds of the tube, every step alters a bit the ground and loses it’s natural feature. Anohter interesting feature of the cave is that photography with flash is permitted, as the stone walls absorbe light and doesn’t affect its surface, where in other caves is completely forbidden because the walls reflect light. 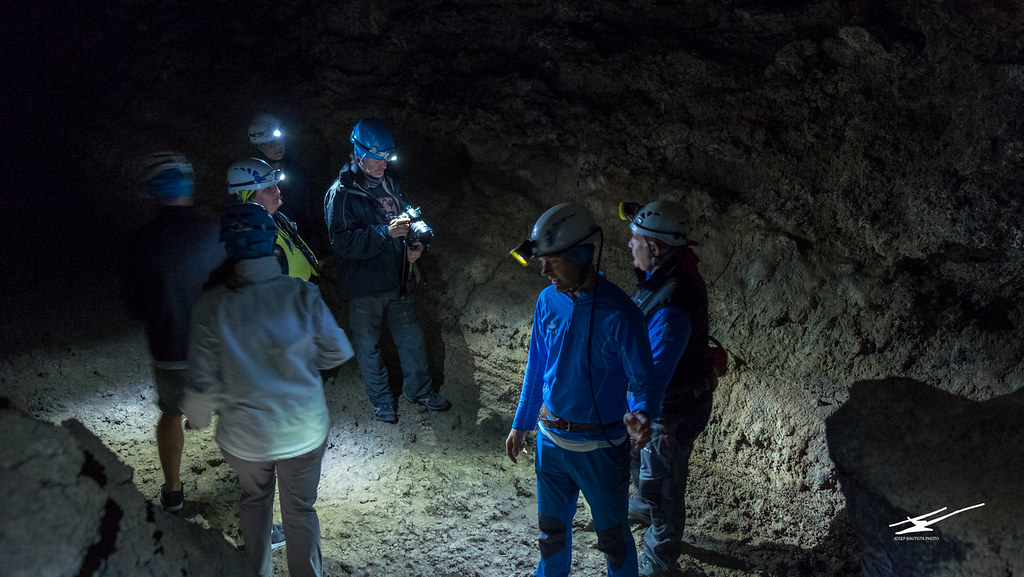 Our group of adventurers in Cueva del Viento. 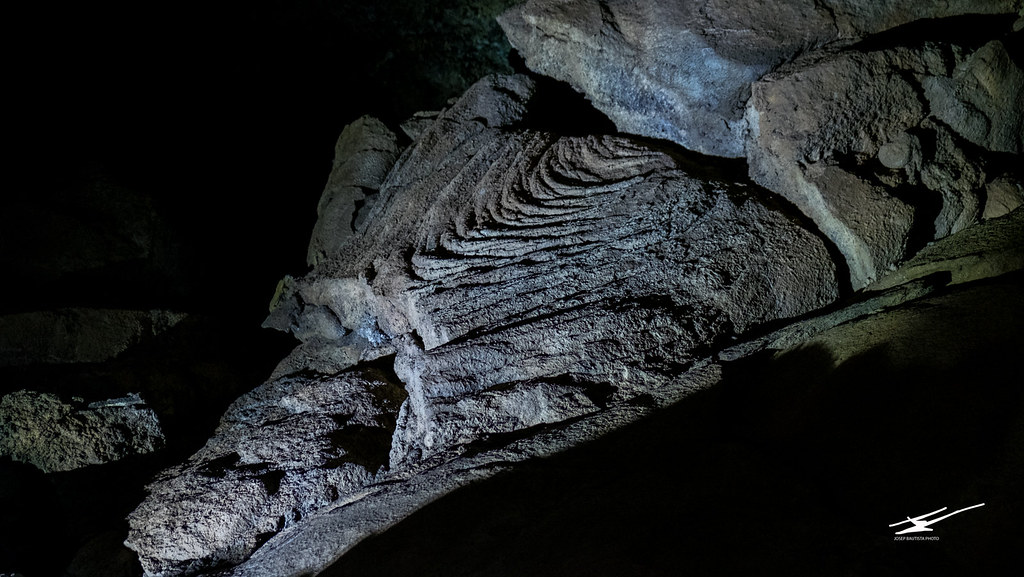 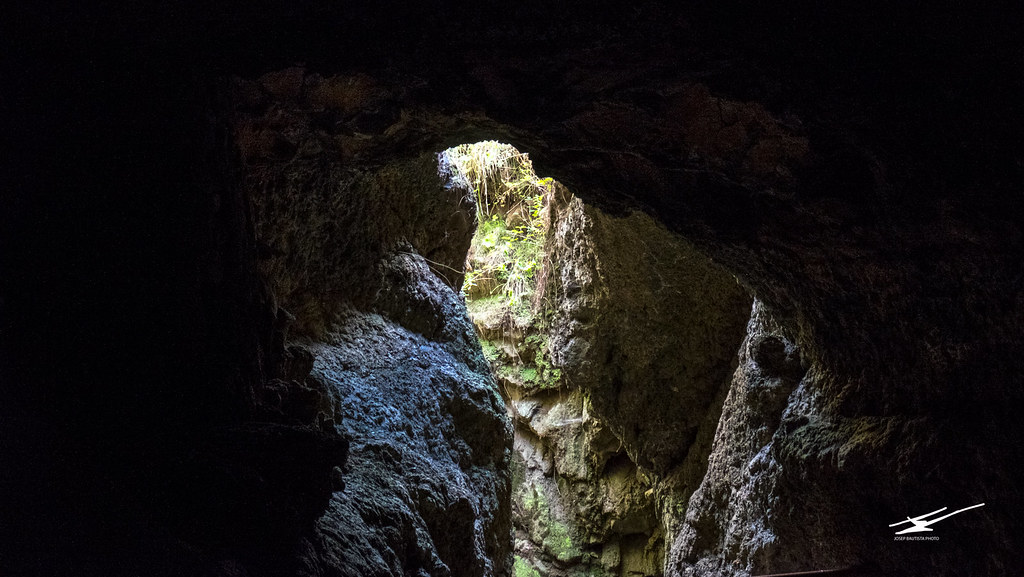 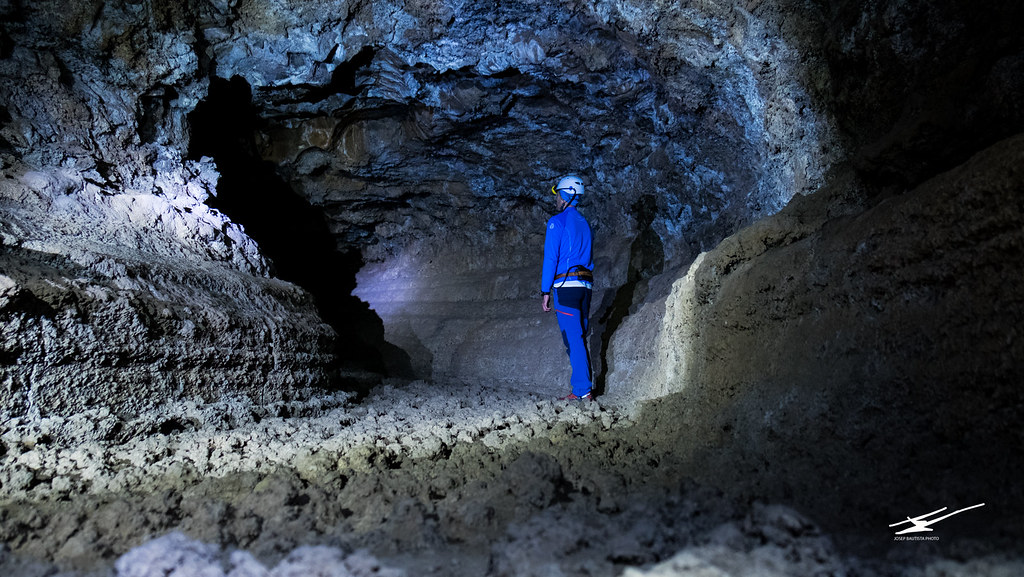 Size of the lava tube, guide for reference.

A special task for our planet
We, as visitors should demand this special spots of our planet to be kept in natural conditions, as the guides and staff from Cueva del Viento fight for. They fight everyday against the tourist massification and try to keep at its best condition such magnificent places, and conservation of natural areas. They task is admirable, and tourists and visitors should take conscience about it. It’s also our task to protect our planet, and the places we want to visit and share. Did you know that 2017 is the year for sustainable tourism? Let’s make it for every year from now on. 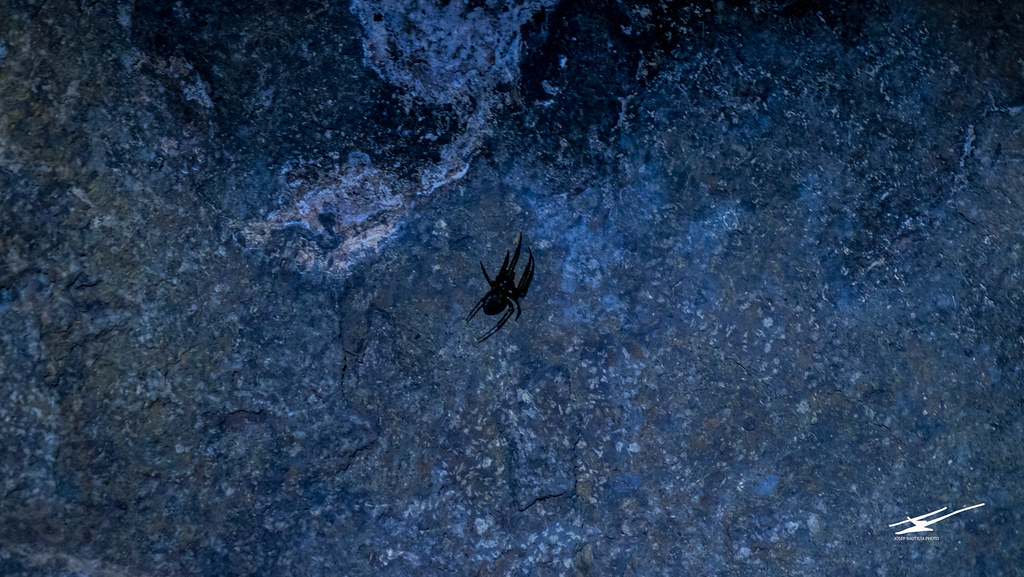 There are other little inhabitants inside Cueva del Viento.