The beauty of Toshogu in Nikko

Surrounded by forest and guarded by the large complex of temples, lies the mausoleum of Tokugawa Ieyasu. Declared UNESCO World Heritage Site, Toshogu is a must do visit north of Tokyo, for all those passionate about history, culture, crafts, and nature. 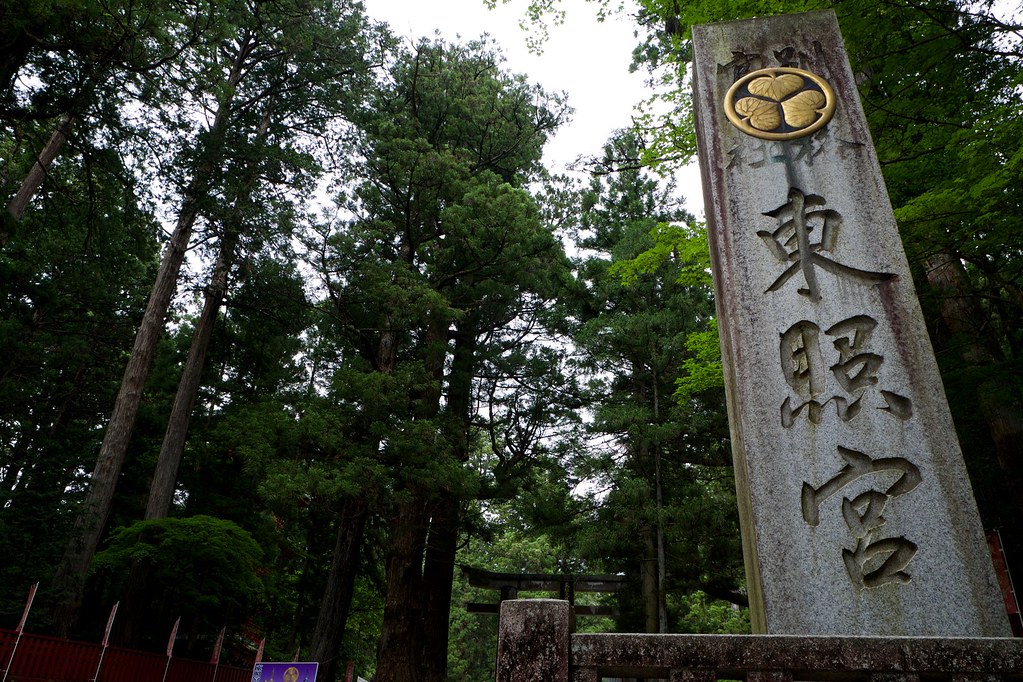 Around the shogun
Tokugawa Ieyasu, the founder of the Tokugawa Shogunate is enshrined in Toshogu. First, it was only the mausoleum built in the forest of Nikko. Then, the temples and shrines were built in the area. The whole Toshogu is a unique complex of temples and buildings, decorated to detail with gold leaf and wood carvings. Opposite to the simple decorations used in many other Buddhist temples and Shinto shrines. The entrance to the main area costs ¥1300. 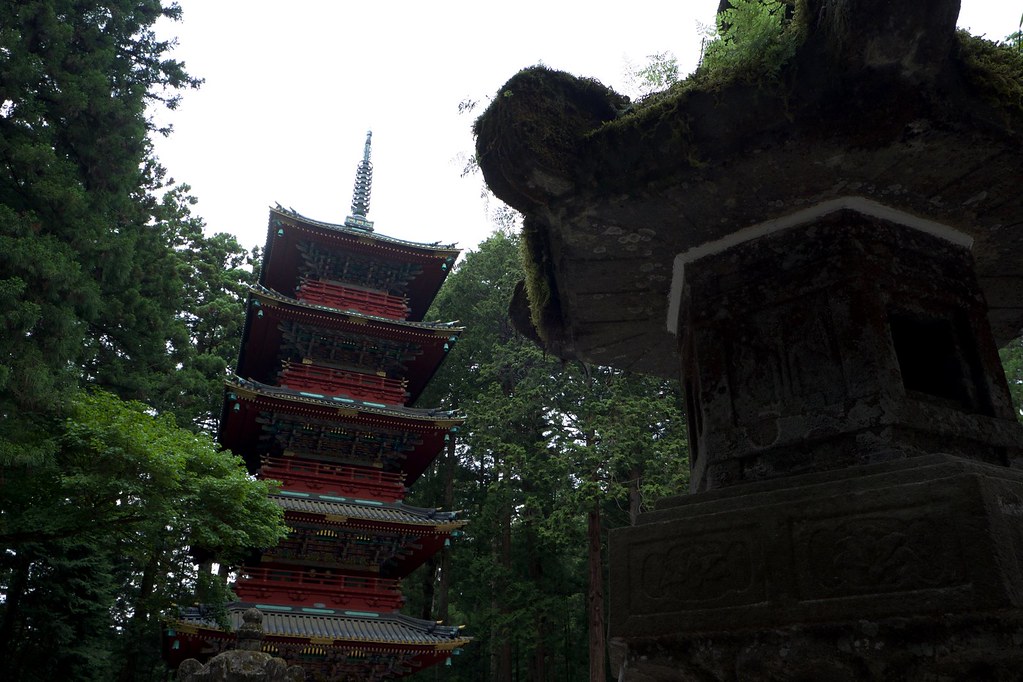 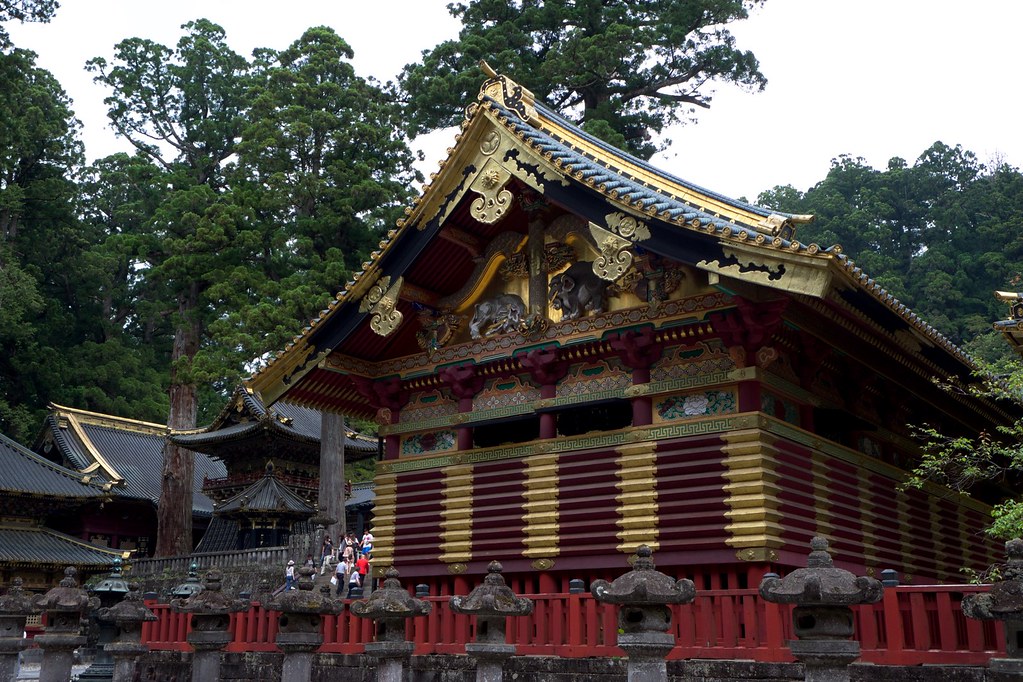 Under Construction
As many other temples and shrines, Toshogu has been under renovation and restauration works for years. The largest Yomeimon gate and main building is now the main focus of renovation, scheduled to be complete in March 2017. The rest of works in Toshogu are as stunning as the Yomeimon gate. The renovation process started in 2003 and will be completed in 2024. 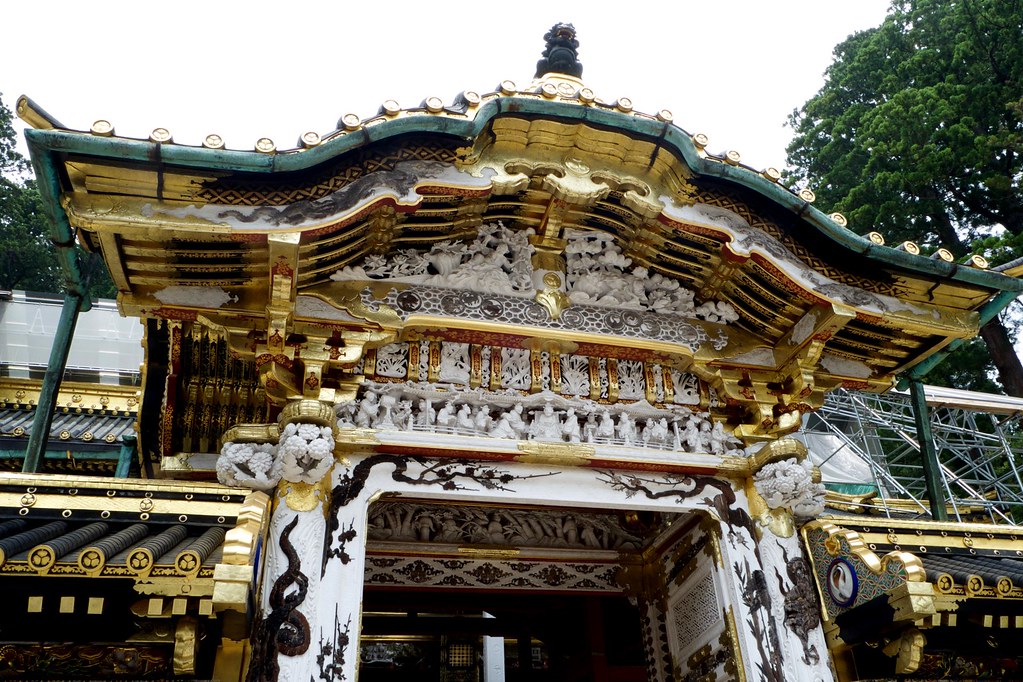 Gate to the main shrine. 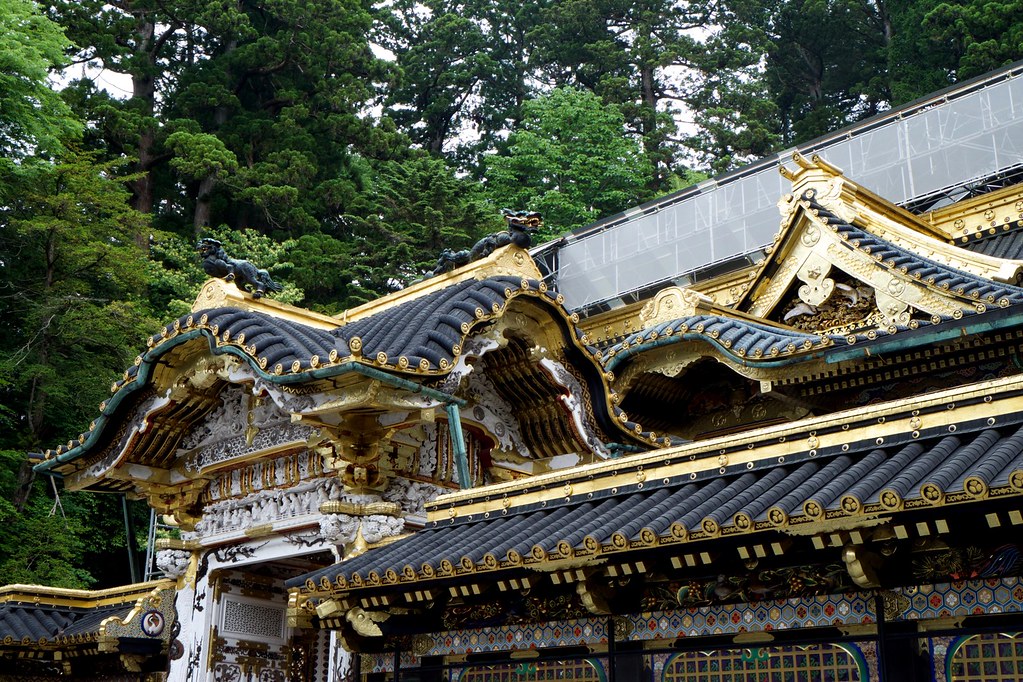 As of June 2016, this was the renovation state of the main shrine. 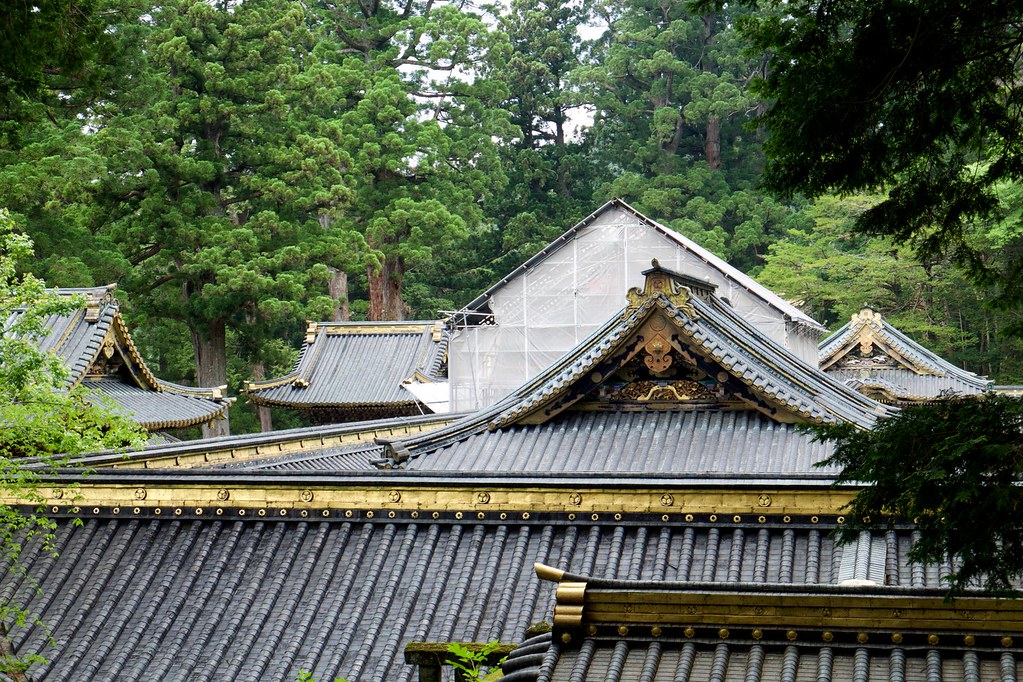 As of June 2016, this was the renovation state of the main shrine.

Three Wise Monkeys
The first thing I heard about Toshogu was the legend of the Three Wise Monkeys. Hear no evil, see no evil, speak no evil. The popular wood craving is in one of the stables. A deeper look into the cravings makes one discover several other masterpieces, like the imaginary elephants in one of the storehouses. The sleeping cat is another of the popular carvings, at the entrance to the stone path to the mausoleum. 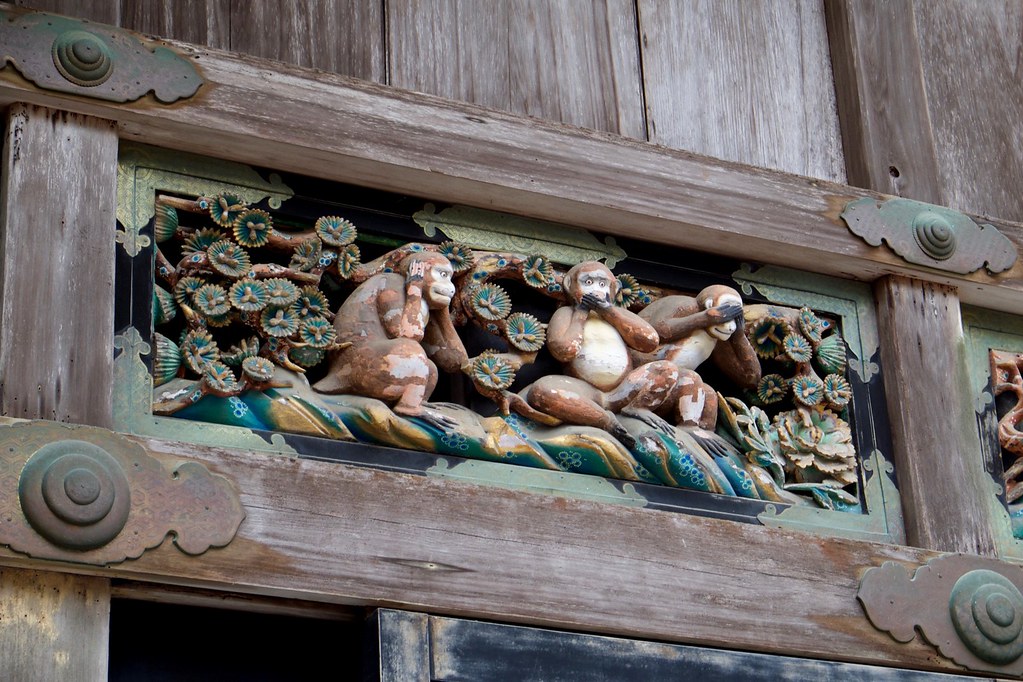 One of the most famous carvings of Toshogu, the Three Wise Monkeys. 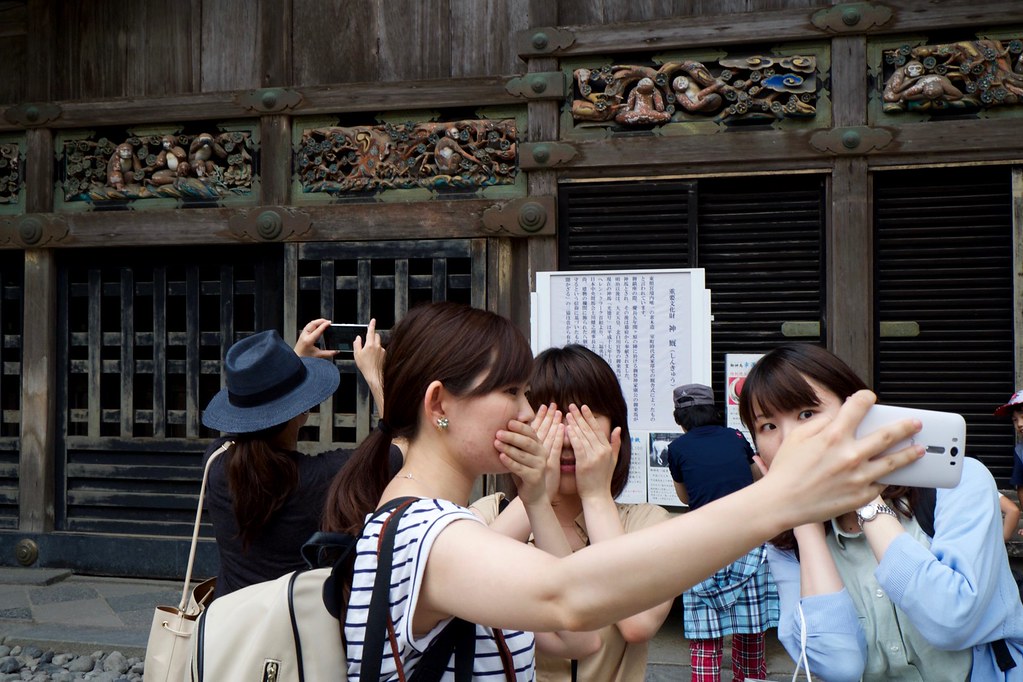 Posing for an original selfie doing an imitation of the Three Wise Monkeys. 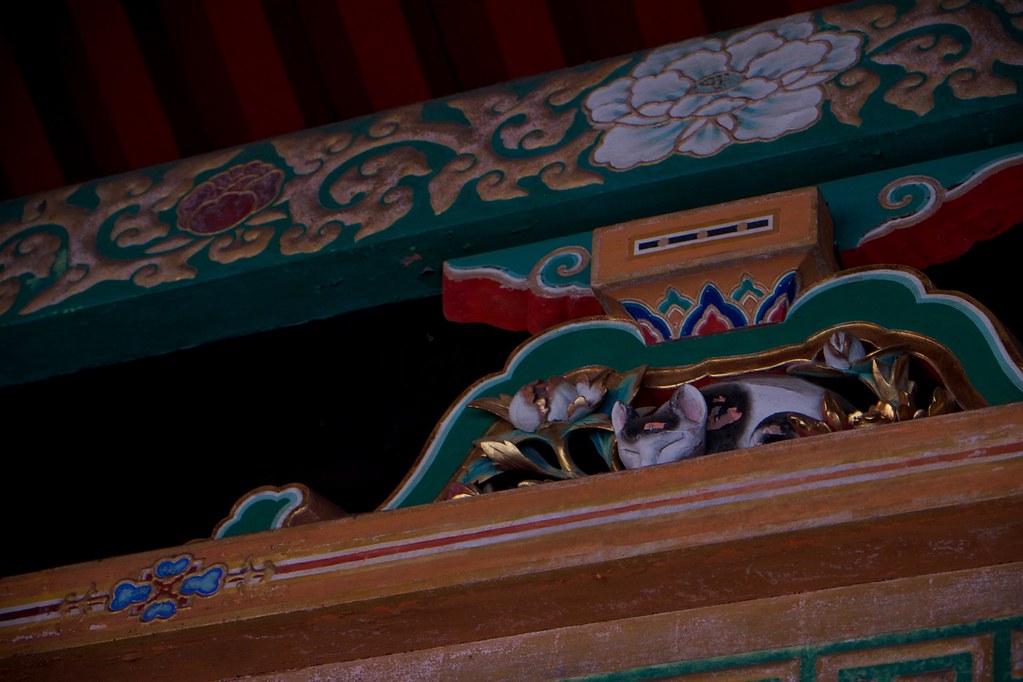 The sleeping cat, over the gate to the forest path.

The mausoleum
At the top of a stone path, the final resting place of Tokugawa Ieyasu is guarded by komainu, in a sacred spot of the forest. Next to it, there’s an ancient tree, where visitors can make his prayings. The whole area is considered a sacred land. 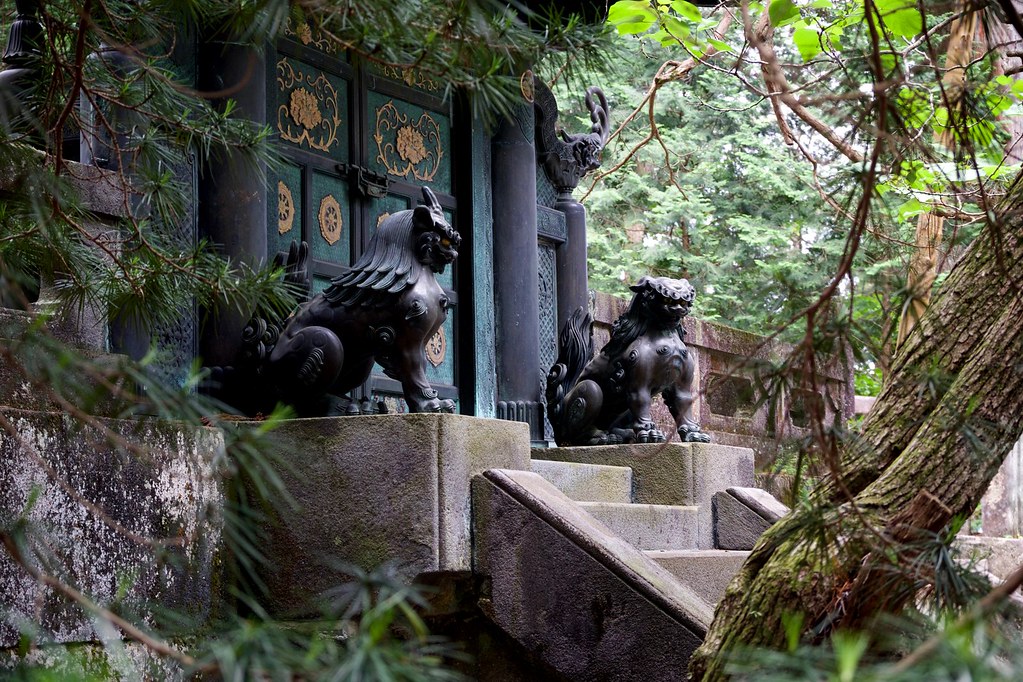 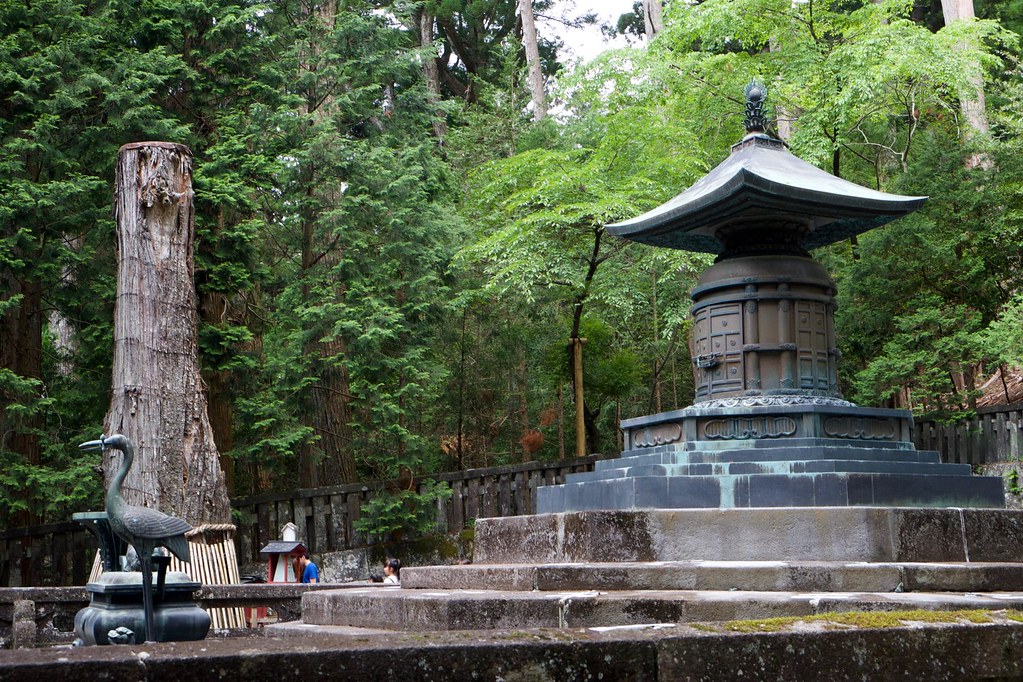 Mausoleum of the Shogun Tokugawa Ieyasu in Nikko. 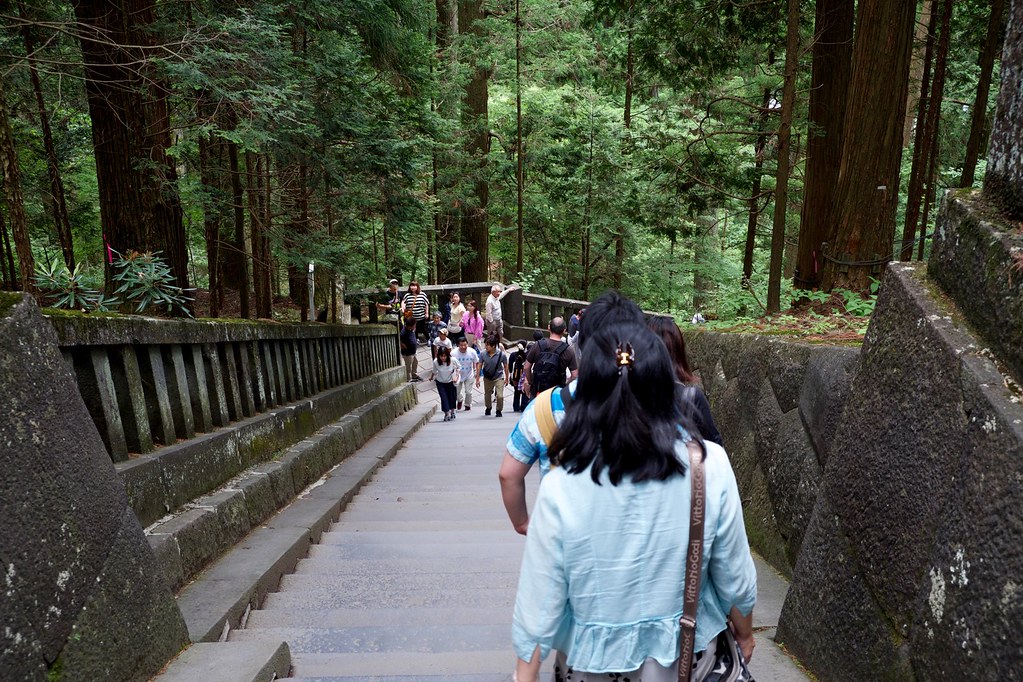 Toshogu, surrounded by the deep forest. 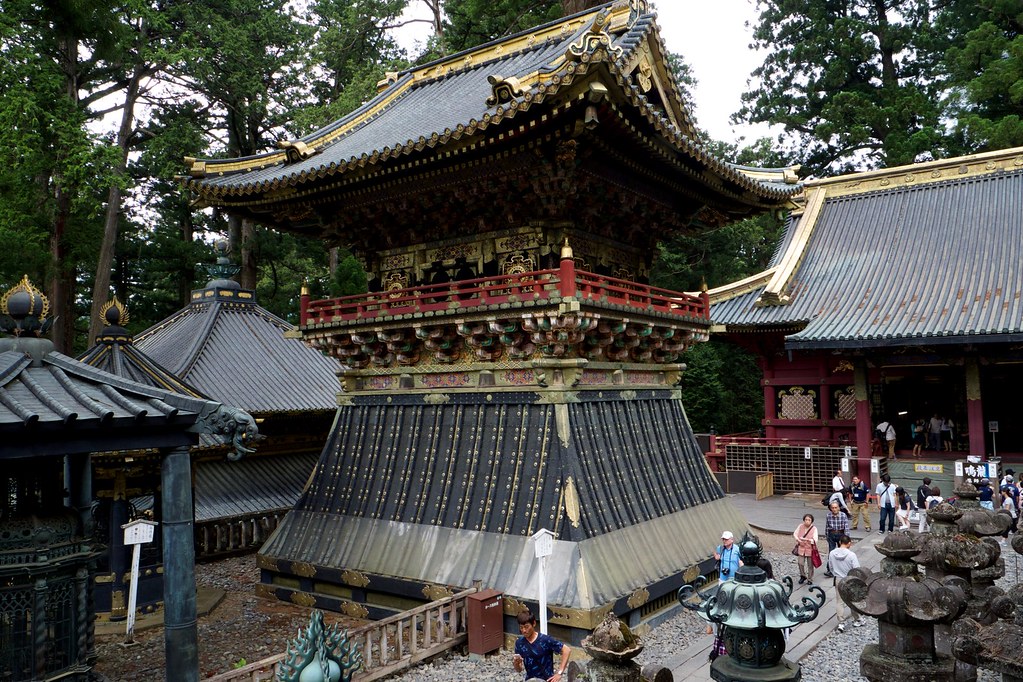 Next to Yomeimon gate, a crying dragon can be heard at one of the shrines.

The crying dragon
Another legend that has gained popularity amongst foreigner tourists in the last years is that in the Honjido Hall, sometimes the cry of a dragon can be heard. This feature is performed by a monk, clapping two pieces of wood in a precise spot of the Hall. 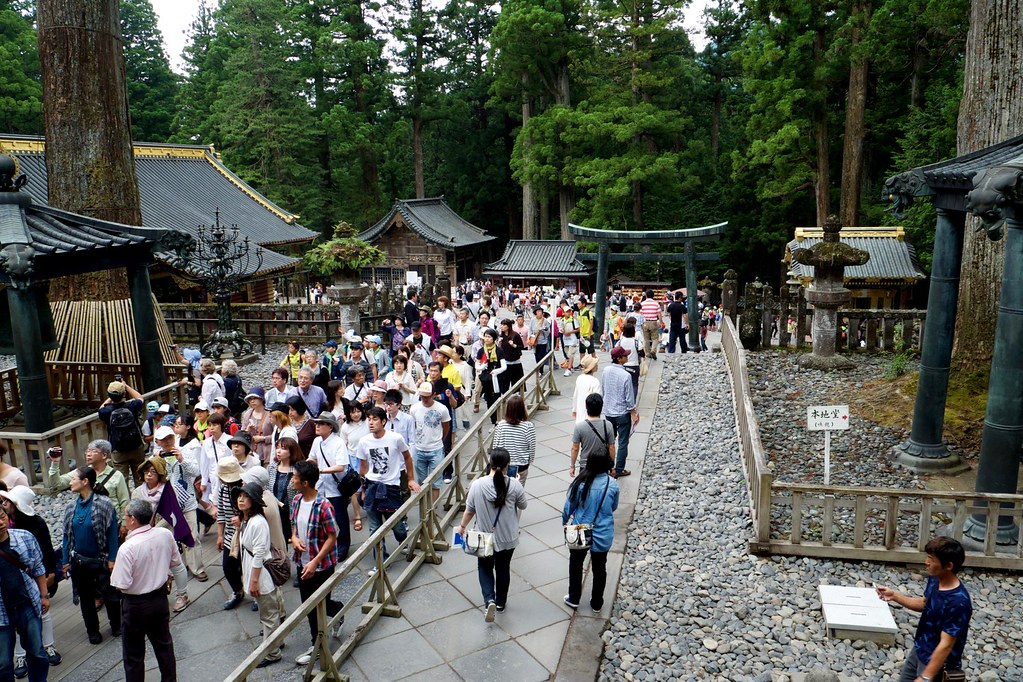 Make sure to arrive to Toshogu earlier than the mass tourist groups.

How to get there
From both Nikko stations (Tobu line, JR line) depending on which line you get there by train. The recommended is to take the one day bus pass for ¥500, in case you want to visit other parts of Nikko. The earlier you arrive, the better use of your time. Opens at 8AM and closes before 5PM.