During my residence in Tokyo for the last years, at the beginning I was focused just in getting at the japanese life pace level, and after that, it was moment to search for a part time job, known as arubaito or baito in Japan.

As an international student in Japan, the student visa allows students to work up till 28 hours per week, and there’s a list of jobs you can’t apply for and not allowed to do like Host bars, nightclubs, or basically any job related with nightlife or that may put you in some kind of danger.

The obvious options at the beginning where the easy-to-get jobs, that most expats brag about when living in tokyo, so I started from those. Private teacher, english conversation schools “eikaiwa” and hall staff in any international bar or restaurant (if you’re italian it will be easier for you to get a job at an italian restaurant).
So I registered in many of the websites for private lesson teachers, and also in some eikaiwa, then the only thing left to do was for waiting the first students to contact me.
So the counterpart of it began. To earn good money doing private lesson you have to be 100% into it with your schedule. You depend on this students to make a living, so you start squeezing your schedule to the limit to make an appointment with a possible student that might cancel on last minute (I found this as a common behavior with japanese people, and the excuse is always because of work or lack of motivation), so you end up with unexpected free time and no money in your pocket, go home and hope the next student doesn’t cancel the lesson as well.
Second of my problems, I wasn’t getting as many students as other friends of mine. Comparing to them, in general girls (from Spain, Italy, or England) they where getting more emails from possible students, almost 90 % of them japanese guys.
Most of the jobs at companies are only for native english speakers, which made it even more difficult a non native like me, even though having better qualifications, to get even in the interview process.

Finally I decided to throw away the idea of the low-payed-hard-schedule and focus on finding a job at some izakaya or restaurant that I could use japanese and the clients were mostly japanese, to improve as much as I could my language skills. 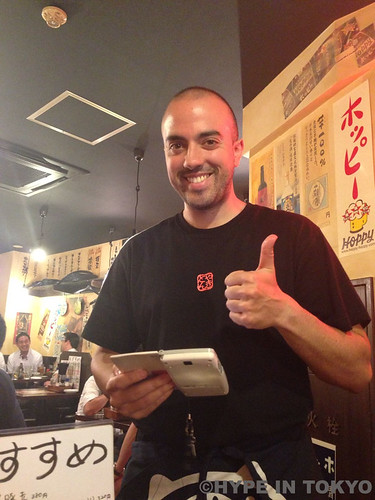 My language skills improved day by day and I got a lot of slangs and rich vocabulary to use. All the part time jobs I did were a nice experience, and the hall staff job and coworkers were really nice and patient with me.

Money, on the other side, wasn’t enough to keep living in Tokyo for much longer, so Hall staff wasn’t the only job I was doing. Besides, I was doing another part time job that I didn’t expect to be really succesful as it was for me. But that, is a story for another time.